My favorite dog trick is the group hug. This is achieved by taking a dog's bad habit (rising up on strangers who don't really want a 70# dog rising up on them), and "flipping it" into something cute and adorable. It's all a matter of controlling perception, and that is something forecasters are good at in the abuse of significant digits.

Do You Really Need All Those Digits? 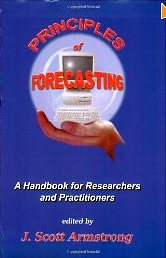 So how many significant digits should we use in reporting our forecasts? More digits (as long as there aren't too many!) can give a false sense of precision, implying we have more confidence in a forecast when such confidence isn't really merited. Fewer digits are just another way of saying we don't have much confidence at all in our forecast, implying a wide prediction interval in which the actual value will fall.

Armstrong (p. 810) suggests "A good rule of thumb is to use three significant digits unless the measures do have greater precision and the added precision is needed by the decision maker." I suspect there are very few circumstances in which more than three digits are needed. You are probably safe to configure your forecasting software to show only three significant digits.

Think of it this way: Suppose you can create perfect forecasts (100% accurate), but are limited to just three significant digits. What is the worst case forecast error?

If the perfect forecast is 1005, but you are limited to three significant digits, then the forecast would be 1010 or 1000 (depending on whether you round up or down). When the actual turns out to be 1005 (as predicted with the perfect forecast), then your forecast error is 0.5%.

Limiting the forecast to three significant digits creates at most a 0.5% forecast error (and often considerably less than that). What forecaster wouldn't sell his soul for a 0.5% error? Given that typical business forecast errors are in the 20-50% range, another half a percent (worse case!) is nothing.

To conclude: In the continuing pursuit to streamline the forecasting process, and make it appear less ridiculous, get rid of all those extraneous decimal points and digits, and limit your forecasts to just three.