We continue my colleague Udo Sglavo's example with the SAS code for incorporating R models into SAS Forecast Server: 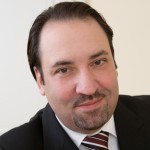 Code for Including R Model Results in SAS

As a first step I’m exporting a data set containing one  time series from SAS to R (actually I will use the same data as for the cross-validation experiment: data set A10 (“Monthly sales of anti-diabetic drugs in Australia”) – as I would like to compare the forecasting methods using the last 12 month as out-of-sample data, I’m splitting the data first before passing it to R).

As a next step PROC IML is run to access Hyndman’s ETS model in R. Note that between the submit block R code is used. The resulting matrix of ETS is reimported to SAS. Due to my poor understanding of ETS in R I’m assuming that there is not a single object which contains both the fit and the forecasted value. As such I’m importing 2 data sets.

After importing the results from R I’m creating a data set which can be used in SAS High-Performance Forecasting as an external model input. Also I’m adding back the out of sample data.

Also I’m creating a model repository, which will allow me to include the R model in the SAS High-Performance Forecasting run.

Then I’m running the diagnostic engine called HPFDIAGNOSE to let it figure out the appropriate models automatically. Note that I’m leaving out 12 periods as out of sample data. Also I let HPFDIAGNOSE decide which ARIMA, UCM or ESM formulation makes the most sense for the data at hand.

As a last step I’m running the HPFENGINE to pick the model which performs best (using the three SAS models and the R ETS model). I’m using MASE as a selection statistic and again I’m using 12 month as out-of-sample data.

The resulting model selection table and the forecasts plots look like this: 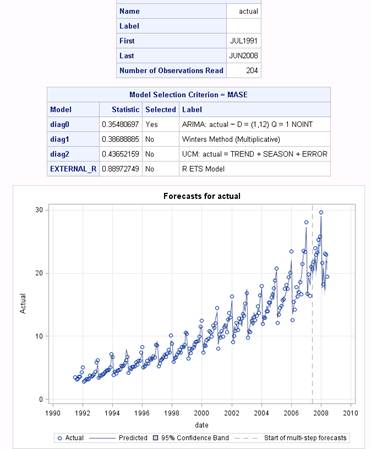 In this particular case the ARIMA model outperforms all other models – which is in line with the findings of the cross-correlation exercise I published earlier.