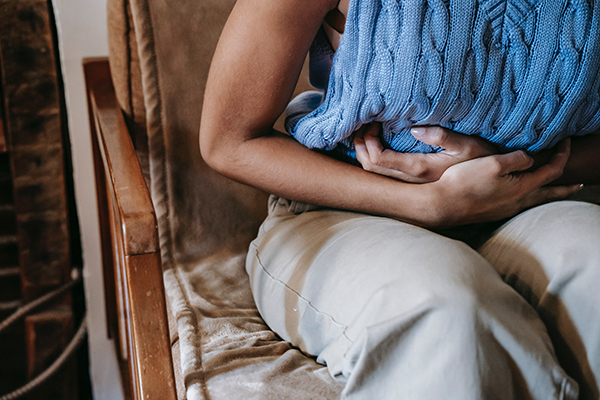 Are you bothered by a runny nose for hours after eating certain foods? Or brain fog or joint pain the morning after straying from your normal eating pattern? Do you avoid eating in unfamiliar restaurants for fear of the aftermath? If any of these scenarios sound familiar, you may have an adverse reaction to food, but it may not be a food allergy. 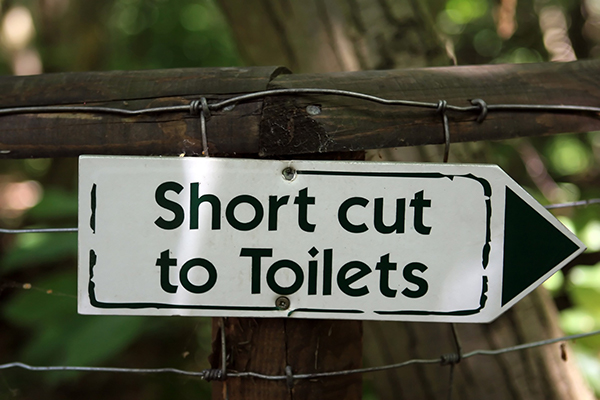 The term “food allergy” tends to be used as a catch-all for an adverse reaction to a food or food additive, but technically-speaking, food allergies involve a very specific immune response, and many adverse reactions to food are not true allergies. There are a number of ways foods can trigger a negative response from the body, and they aren’t limited to gastrointestinal symptoms. These reactions to specific foods can be classified into three main categories based on the involvement of the immune system.

Food allergies involve the immune system’s response to specific proteins in a food. Symptoms generally appear within 15 minutes after eating the offending food. Food allergies are IgE-mediated — they involve antibodies found in the lungs, skin and mucous membranes of the body — the same parts of our bodies that seasonal and environmental allergies involve. Allergic reactions to food can result in hives, swollen lips, tongue and throat, trouble breathing, etc. These allergies can also affect mucosal lining of the GI tract leading to nausea, vomiting and diarrhea.

Often very small amounts of the food allergen can trigger a reaction. Though there are different degrees and subcategories of food allergies, some types of food allergies can be life threatening, and for this reason, in the U.S., the big eight food allergens must be clearly labelled on any products that contain them. Ninety percent of all food allergies in the U.S. are caused by the “big eight” (milk, eggs, fish, wheat, crustacean shellfish, peanuts, tree nuts, soy). The incidence of allergic reactions to sesame is on the rise, so this unassuming seed/oil is being added to this list and will be identified on food labels by 2023. You can learn more about food allergies at foodallergy.org. 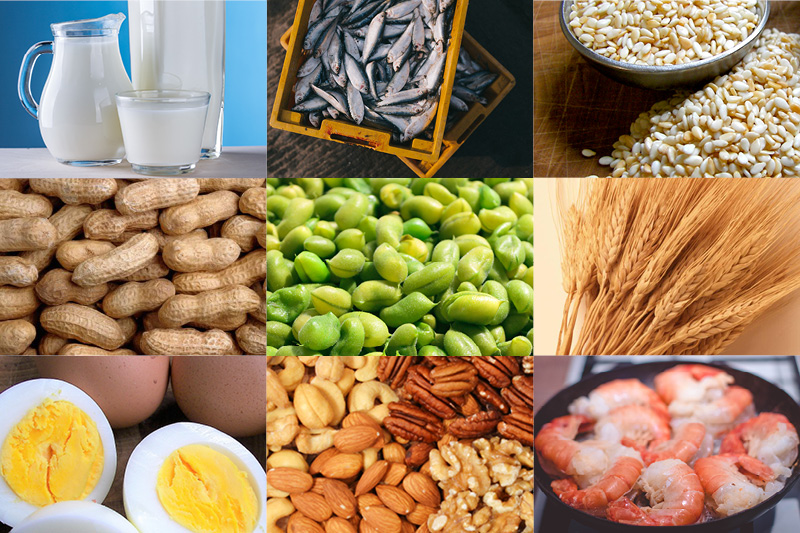 Food sensitivities, also known as non-IgE-mediated hypersensitivities, involve the immune system as well but do not involve the same immune pathways as allergies. Instead, they may involve IgA, IgG, IgM antibodies. Symptoms resulting from food sensitivities have a delayed onset, meaning they may not appear for hours or even days after the food is ingested. They are generally dose dependent, meaning while a small amount of a food might be tolerated, after a threshold is reached, symptoms result and are generally more severe the higher the dose. Food sensitives can result in a variety of symptoms. Joint pain, skin rash, headaches, runny nose, brain fog, diarrhea, and congestion are a few examples of symptoms that could be caused by a food sensitivity. In general, the parts of the body where an individual is most susceptible to experiencing symptoms of inflammation will be where they experience symptoms from food sensitivities they have developed.

It is thought that food sensitivities develop when increased intestinal permeability allows food particles to cross from the small intestine into the blood stream before being fully broken down. When this happens, the immune system may begin to mount an attack against the intact proteins on that food, and different tissues of the body get caught in the crossfire. When the circulating immune cells release their chemical weapons, symptoms result.

Why do I feel this way? It could be a food allergy, sensitivity or intolerance. Learn the difference. #saslife Click To Tweet

Food intolerances do not directly involve the immune system. Many food intolerances are caused by a lack of adequate digestive secretions leading to poorly digested food components which results in gastrointestinal symptoms. This can occur when intestinal bacteria get a hold of certain undigested carbohydrates that should have been digested and absorbed. The bacteria ferment these carbohydrates which can lead to bloating, gas, constipation and/or diarrhea.

Lactose intolerance is the most well-known intolerance, with many people losing the ability to digest milk sugar after early childhood. Other fermentable carbohydrates (referred to as FODMAPS for “fermentable oligosaccharides, disaccharides, monosaccharides and polyols”) include fructose (abundant in honey, apples, pears and mango), mannitol and sorbitol (found in mushrooms, cauliflower and sugar-free candy) and fructans and galacto-oligosaccharides (in onions, garlic and beans to name just a few).

Some experts also classify reactions to certain compounds in foods such as lectins, caffeine and histamine as intolerances. These reactions often extend beyond gastrointestinal symptoms. 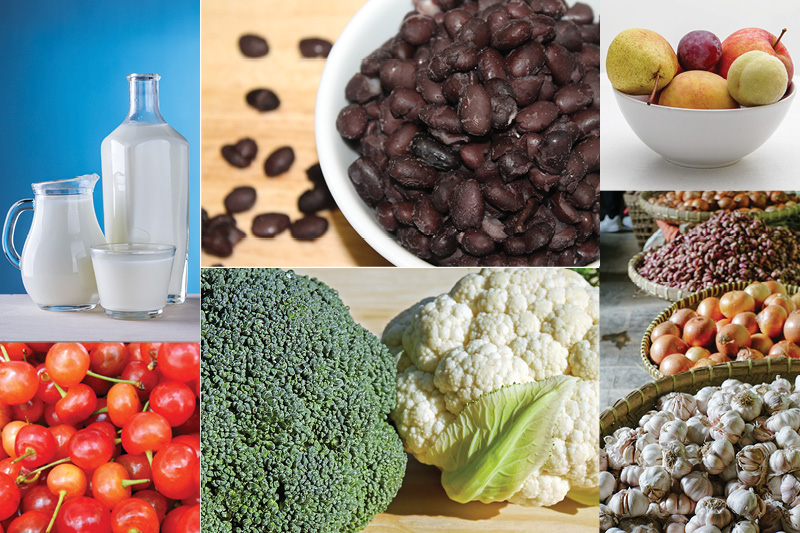 If that wasn’t enough, someone can have both a food intolerance and food sensitivity. For example, milk might cause the same person both gastrointestinal distress due to the failure to digest the sugar lactose, and eczema due to a sensitivity to the protein casein. Because the three types of adverse reactions to food involve different biological pathways, there is no single test that can determine which foods are best for you and which are working against you. For example, an allergy test wouldn’t show if someone has a fructose intolerance due to an enzyme deficiency. In addition, many allergy and sensitivity tests have a high rate of false positives meaning test results will indicate a food is problematic when it is not. And, it’s also possible that some food reactions aren’t related to the specific food eaten, but to a problem with the digestive process itself.

Because the food culprits are tricky to nail down, it’s important to work with your healthcare provider to first rule out other underlying causes of your symptoms. Some environmental factors (e.g., imbalanced gut microbiome, infections, toxic overload, stress, nutritional deficiencies) can increase your risk for developing adverse reactions to food and make them challenging to overcome. Your Registered Dietitian Nutritionist can help you to design a safe plan to eliminate or limit potential triggers for a period of time, rebalance and repair the gut and then get you back to a diverse an eating plan personalized for you. 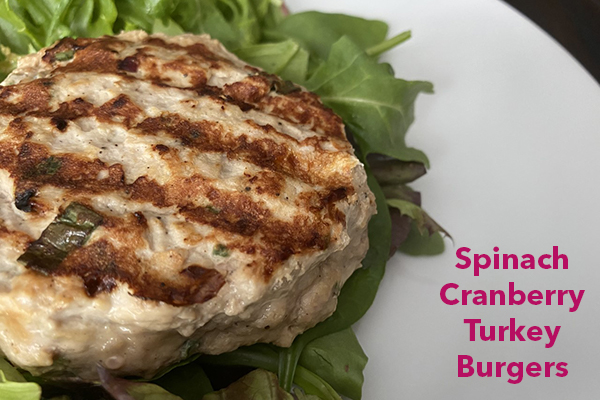 This low FODMAP Spinach Cranberry Turkey Burger recipe is packed with flavor, but not with fermentable carbohydrates. 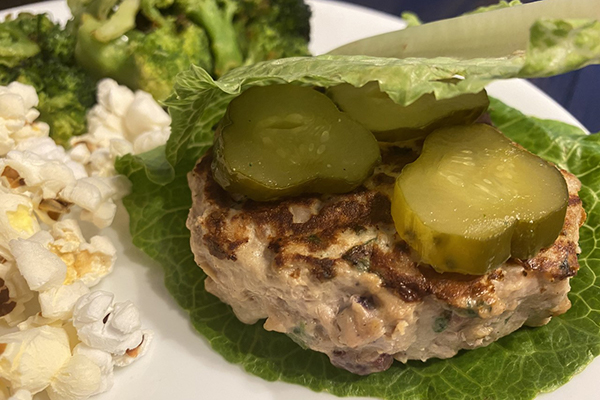 *If you cannot tolerate eggs, use a flax egg instead. In a small bowl mix 1 tablespoon ground flax with 3 Tbsp water and let sit for 5 minutes until thickened.
*Dried cranberries are low FODMAP at 1 tablespoon.
* If you have celiac disease use gluten-free Worcestershire sauce or Tamari. 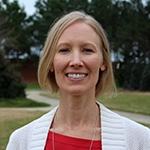 Jen is the Manager of Nutrition and Healthy Living Programs at SAS Institute in Cary, NC. She is a Registered Dietitian Nutritionist and an Integrative and Functional Nutrition Certified Practitioner. Outside of work, Jen enjoys hiking with her family, practicing yoga and spending quality time with her dogs.