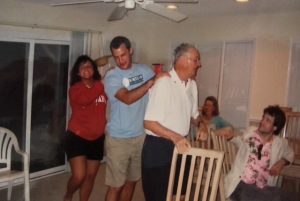 At the end of this week, I’m heading to the beach for our annual extended-family beach trip. This has been a tradition for decades—well before I was born. Yes, which beach we go to has changed, the week we go has varied over the years, but we are committed to gathering. Our dinner menu switches between fresh shrimp boiled in ocean water from the crest of the third wave (don’t ask me why) and fried fish. And we always have one birthday party night where everyone’s birthday is celebrated no matter when it occurs in the year. It’s a competition to see who can find the most hilarious “best fit” card for each person.

There is one thing that has changed over the past few years. Talent Night. It has not only changed—it’s disappeared. At first, I thought it was because things just got busy and time got away from us. But now I have a different theory: we doubt our talent to the degree that shame has relegated this tradition to oblivion. But, why? As I recall, nobody’s talent was that stellar to start with. And that didn’t stop us from putting on sunglasses and ripping up a newspaper to the beat of “Wild Thing”, or singing “Puddin’-head Jones”, or watching my father march around the room with his grandkids chanting a WWI Army cadence called “Drunk Last Night” aka “The Souse Family”.

A quote from Kurt Vonnegut’s novel, Bluebeard, sheds some light on this theory of mine:

“...simply moderate giftedness has been made worthless by the printing press and radio and television and satellites and all that. A moderately gifted person who would have been a community treasure a thousand years ago has to give up, has to go into some other line of work, since modern communications put him or her into daily competition with nothing but world's champions.... A moderately gifted person has to keep his or her gifts all bottled up until, in a manner of speaking, he or she gets drunk at a wedding and tap-dances on the coffee table like Fred Astaire or Ginger Rogers. We have a name for him or her. We call him or her an "exhibitionist." How do we reward such an exhibitionist? We say to him or her the next morning, "Wow! Were you ever drunk last night!”

I miss Talent Night at the beach. The vulnerability and laughter created distinct memories that still make me smile long after some of these relatives have passed on. I’m not willing to abandon this tradition without a fight. I think I’ll start by planting seeds at the start of the week by recalling my fond memories and begin recruiting folks one-by-one. And, I’ll re-institute Baggett Family Jeopardy so that three less eager participants can assume the ready-made role of “contestant”. Or maybe I'll hand someone a Dr. Seuss book and ask them to do a dramatic reading. Green Eggs and Ham, anyone? 🙂

If any of you have suggestions for how to renew talent night, please send them my way!