There are many areas of health care that need to get real, but real-time monitoring of vital signs (e.g., respiration, heart rate, blood pressure) has the biggest potential to both reduce health care costs and help people lead healthier lives. While wearable fitness-tracking devices are fashionable right now, I am more interested in health-tracking devices that can save patients' lives in hospitals by monitoring vital signs in real time to detect anomalies and prevent critical conditions from becoming fatal.

One aspect of remote patient monitoring, which raises understandable privacy concerns in other contexts, is using wireless devices to track patients with certain conditions after they leave the hospital or doctor’s office. Consider the example of my grandmother who had Alzheimer’s. In the early days, before she had to be moved to a nursing home, she frequently disappeared for hours at a time as she wandered around town. In this context, real-time tracking would have been a positive thing.

Measuring the electricity consumption of homes has historically been based on monthly meter readings where a person had to physically travel to individual homes to read and record the meter. I live in the outskirts of the thriving metropolis of Des Moines, Iowa. Earlier this year, a wireless sensor with a very limited range was added to my house’s meter. This approach drastically shortens the amount of time meter readers spend just driving around. In fact, now the meter reader can read all the meters in a neighborhood without leaving the truck – in the same amount of time it previously took to read just one meter. Wireless sensor technology allows meters to be read more frequently than once a month, but it falls short of real-time electricity optimization. That is coming soon (probably sooner outside of Iowa). Real-time optimization will require Internet-connected devices streaming electricity consumption measurements in real time to accurately determine peak usage times and then optimize the power grid. 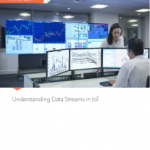 I can’t help but laugh when my fellow Iowans complain about traffic. I grew up in Boston and spent time working in Atlanta, Chicago, Houston, Los Angeles and Seattle. I know what real traffic is. Because I've experienced first-hand the white-knuckled frustration of intermittent stop-and-go traffic that has seemingly no cause other than the universe conspiring to prevent me from reaching my highway exit. And the soul-trying tyranny of a red light at an intersection when there are no cars coming from the direction of the green light.

Real-time traffic management systems will require coordinated communication between sensors installed in highways, streets and cars (or apps on drivers’ smartphones) – sensors that can measure the traffic flow on highways and the amount of traffic moving through street intersections. These real-time capabilities are not only about the convenience of less traffic congestion (and road rage) – they're also about helping the environment by reducing pollution from vehicle emissions.

What do you think needs to get real?

What other things do you think should be enhanced with real-time capabilities? Share your perspective by posting a comment below.