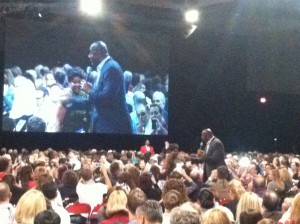 Earvin “Magic” Johnson  is very large in stature and even larger in personality. He is often remembered as a professional basketball star and is now making his mark in the business world in a characteristically large-sized way.  And Magic just loves to prove people wrong – especially if they tell him he can’t do something.

At many stages throughout his career, he has been underestimated by people who did not think he “had what it took” to meet the challenge at hand. And apparently hearing that doubt in his abilities is all it takes to steel his determination. To that highly personal motivator, he offers a few other key factors for marketers to embrace for success. 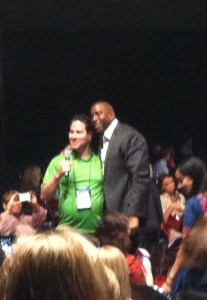 Get out of your comfort zone

He credits obstacles and circumstances from his early years with teaching him how to understand and deal with people and situations way outside his comfort zone – key talents he attributes to success in business. One way he’s been effective in business is by focusing on urban communities – and more specifically in getting companies investing in ethnically diverse urban communities that would normally overlook them. Taking this approach, Magic got Starbucks to grant him a franchise for urban locations and then was able to report better metrics than the corporate-owned stores.

This is so important that it’s not simply a concern of marketing – it’s business strategy. And this is how Magic believes he was able to make inner-city Starbucks locations a success. In his words, out went the scones and in came the sweet potato pies. Out went the music tracks heard in traditional Starbucks locations and in came the Earth Wind & Fire and other bands more familiar to the inner city resident.

For B2B, it’s a matter of knowing the core values of the organization, and of the CEO. Research the company mission statement and convey your value proposition in terms of how you can help the company fulfill its mission. For very large organizations with complex business models, nothing beats analytics for getting insights to inform an accurate customer view.

Everybody has expectations – sometimes it’s driven by contractual obligations and at other times it’s driven by general business norms. No matter what’s driving them, Magic Johnson believes in over-delivering. Some of this comes from his personal drive to prove his detractors wrong, but he translates this to a core value that’s organization-wide that has translated into the investment funds he leads which have grown progressively larger from $300 million to over $1 billion. On a day-to-day basis, Magic is quick to point out the fundamental importance of your front-line workers in impacting the customer experience. It’s important to equip them and empower them to over-deliver. His viewpoint validates the need for cross-organizational alignment around the same customer vision.

Be prepared and focused

Magic Johnson does his homework – every time, and he wants to know as much about the audience he’s speaking to as possible. Doing that enables him to understand how to focus – to prepare his message, the delivery and any potential extenuating circumstances that would impact the outcome of what he has in mind. In the last couple of years, his biggest concern was the economy. So in his stake in the inner-city Starbucks, he knew that in a normal economy, people might visit a Starbucks 3-4 times a week. He also new that people would be likely to cut back when times were lean, so he redirected the focus to customer retention and trying to make sure people felt special when they came in so they would keep coming back.

Do a regular self-assessment to improve

Play to your strengths and shore up where you’re weak. Magic advocates doing a SWOT analysis of your business twice a year and to be very honest about what your weaknesses are. And try to do it on a forward-looking basis, particularly if you think you want a growth strategy and make sure you can manage the growth. It’s more important to keep your customers happy, even if that means operating at a smaller margin because satisfying your customers is how you build a business-sustaining reputation. This self-awareness approach of his goes hand-in-hand with always being open to learning and improving. He is a self-described sponge that keeps reinventing himself – he never stops improving and is never satisfied.

Magic Johnson was the opening keynote speaker at the DMA Annual Conference. He charmed the audience by working the crowd with a highly personal touch. As it happens with other successful public figures, his charisma made it seem like every single person in the audience was the most important person in the world.

I must say – it was indeed magic.