Word-of-mouth references and first-person accounts are usually the best way to get the “real deal” on something. It’s how you can get unfiltered information that’s almost as good as having the experience first hand. 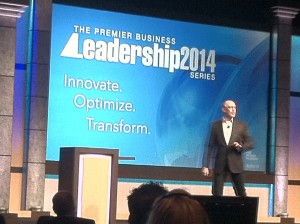 With that idea in mind, I was more than pleased to hear George Blankenship share his unique perspective from a long career of creative breakthroughs at game-changing companies like Tesla Motors, Apple and The Gap.

George speaks with authority about doing the impossible.

The common thread at all three companies is that they’ve managed to pull off the impossible. So how and why did it happen at each of those companies? George attributes it to the ability to step back and see what’s happening more clearly than whoever happens to be the dominant player in the market at the time.

In the case of The Gap their new approach was to make quality, value and style accessible for customers. And they did it simply and in a way that they become a trusted editor (of style) for their customers. Their approach was to create 4 great sweaters and make them accessible, and not 40. And then repeat it across multiple channels to serve different markets – The Gap now operates successfully as Banana Republic, Old Navy and The Gap.

What’s interesting is that Steve Jobs wanted to sell technology at Apple like a fashion item – like Banana Republic. So Steve sought out George and asked him to spearhead Apple’s improbable move into opening retail stores in shopping malls. History has shown that move to be wildly successful and disruptive as a result. And then Tesla Motors – what approach did they want to take? They want to sell cars like Apple sells computers - big surprise!

But in those approaches is it really selling? Looking more closely, customers are not simply buying – they are having an experience. That’s part of the appeal and part of the differentiation of these companies. And tellingly they focus on making the customers satisfied and have been rewarded handsomely as a result.

Apple went from being a company whose products nobody wanted to own to the most valuable company on the planet. Part of their approach was to ambush customers – engage them with something nicely different at a moment when they’re not buying, or more importantly to get them when they don’t expect to be sold a product. That was the thinking behind the first two Apple stores – in Tysons Corner, VA and in Glendale, CA – that had opening-day lines to get in the store that were hundreds of people deep.

The other common thread among those companies is that Steve Jobs’ and Elon Musk’s laser focus on a concept is legendary and so was The Gap’s Mickey Drexler.

So what’s the big appeal of owning Apple products now?  It’s a combination of innovation, simplicity, design and an unparalleled ownership experience. The innovative part was that their products are user-centered and make it very easy to do what they need to do. Their design is both fun beautiful in their simplicity – both ergonomic and visually pleasing.

And the kicker is the ownership experience. It begins with people – their Geniuses are great people-oriented people. And they turn them loose to make their customers feel important, respected and taken care of. At the Apple store, no matter where or when you bought your Apple product you’ll be taken care of at the Genius Bar. And then there are the applications – remember “there’s an app for that?” To me it seems like Apple products are as much about the apps as they are about the devices themselves.

What has Apple revolutionized with their approach? Well for starters – the retail experience, music, mobile phones, mobile computing, and even babysitting. George points out how easy it is to let kids get wrapped up in games or videos on an iPad as his example of revolutionized babysitting – and he has a point!

So how can these approaches be replicated? It’s a matter of stepping back and seeing the synergies happening all around us, such as drones, streaming videos, personal activity monitors.

How can analytics help in doing the impossible? George sees the opportunity in data as telling you what everyone else is going to do, and by extension it also shows you what they’re not going to do. And to change the world, sometimes you need to do the impossible.

The Postal Service was founded in 1775, and UPS was founded in 1907, but it wasn’t until 1971 that Fred Smith decided to try offering an overnight package delivery service and founded Federal Express. Apple wasn’t even in the phone business before 2007, and Tesla was founded in 2003. George believes somebody is going to attempt the impossible and revolutionize many industries in the next 10 years. The question he leaves us with is – will that be you?

George Blankenship was a keynote speaker at the Premier Business Leadership Series conference.