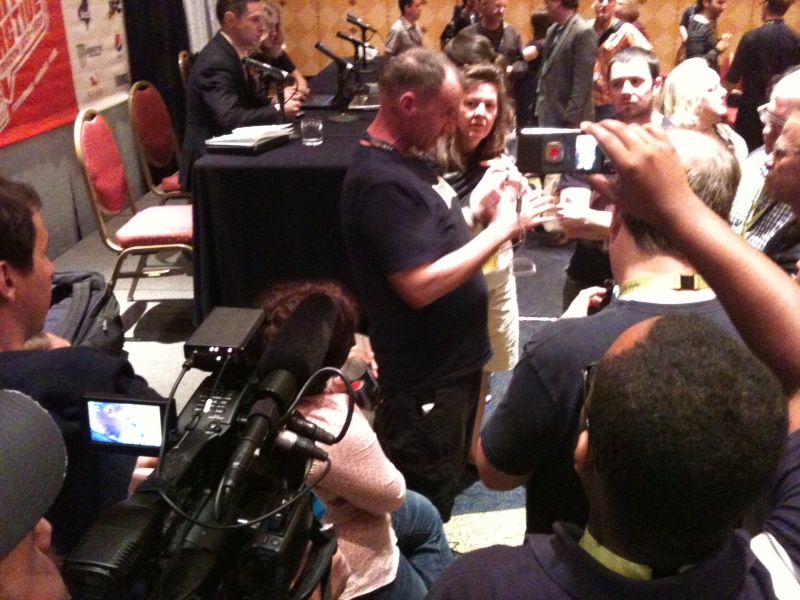 David Carr after the session

These are my notes from the SXSW panel discussion, “Media Armageddon: What Happens When The New York Times Dies?”

The panelists were David Carr from The New York Times, Amy Langfield from Newyorkology.com, Markos Moulitsas from Daily Kos and Greg Beato from Reason magazine. The panel was moderated by my fellow Carrborian Henry Copeland from Blogads.com.

Henry: If the times ceased to exist, how would you feel?

Marcos: There's a perception that a lot of bloggers cheer the demise of traditional media, but it's not true. It goes both ways. Traditional journalists use bloggers for material and vice versa. People like me just want traditional media outlets to do their jobs. The New York Times, famously liberal, helped cheer our way to the war in Iraq. The decline comes from the fact that people have lost faith in the traditional media's objectivity. Bloggers have a bias, but they make it clear.

Henry: Daily Kos has 30,000 people writing for it. If the Times went away, they must be able to step into the breach, right?

Amy: Crowdsourcing is not the solution. You need to know and cultivate your sources, go to meetings. Amy had a woman call her who was having trouble with a city department. She had to say, “I don't have the resources to cover this story.” The woman asked who would have the resources, and Amy suggested the Times, but that reporter was about to go on vacation. With all the media out there in NYC, there was no one who could devote the week to cover that story.

Henry: Do you see someone at Gawker one day filling your role?

David: Gawker has been marching toward us, adding resources, adding muscle. “The web is still about annotating things that are in plain site.”

We're here and we're immersed in SXSW, but we need to know the things that the NYT is reporting today on bigger issues like the war. There may be a world with vertical arrays of information, “but that's not a world I want to live in.”

Could 100 people like Gawker founder Nick Denton fill the holes for the NYT going away?

David: “I don't think Nick's going to be tracking the $50 billion spent on the war. I don't think he's going to keep a guy in Mexico when it's physically dangerous to do that.”

The problem with the web is that the long-running, difficult story often doesn't get covered. That's what the Times does.

Henry: What is the web doing better?

Greg: There's a demand for news about New York. When the newspaper goes the desire for that news about the city won't go away. The question is who's going to fill that hole.

We have more news on soft topics like sports and entertainment news than ever before. We don't have more investigative reporting.

Henry: Is crowdsourcing the answer?

Marcos: When Sara Palin was announced as VP candidate, the mainstream media spent the first 24 hours just figuring out who she was. The Daily Kos community already knew about her and had debated the simple stuff and had moved on to the deeper questions.

David: I think there've been examples when the hive mind of the web organized around areas of interest. Marcos is right that the passions of people on the web can accomplish a great deal, but it also leads them to very tendentious directions. The problem with assembling bits from everywhere, you don't know what it's attached to and what interests are driving it. One of the advantages of having a tent pole or several tent poles, you do know where they stand.

Marcos: I don't wish ill will on the Times but one of the problems is the implied credibility the Times brings. Citizen journalists don't have that built in credibility so they have to prove themselves every day, do good sourcing, and link to the source materials. Judith Miller was able to just say that her sources told her Iraq had weapons of mass destruction.

David: Don't dismiss all our years of good hard reporting because of the mistakes of one reporter. We're one of the leading sources of information on the Web. Is that just inertia?

Marcos: It's because you've been around for 100 years. Stop being a stenographer for the powerful.

David: If we have a blind source we explain precisely why we're using it.

Amy: It was reported on Twitter. The MTA had tweeted police activity at Grand Central. Half an hour later people started saying there were SWAT teams and Grand Central was being evacuated. Then somebody, perhaps a joke account, tweeted “Dirty bomb at Grand Central.” It was retweeted and picked up momentum. Somebody else found a two-year old story about a steam pipe explosion and tweeted that as the reason. Someone finally went down and took pictures to show there was nothing going on. “It's a crazy little echo chamber where people aren't paying attention to what's going on.”

Henry: How can the Internet solve that problem?

Greg: The idea of a responsible gatekeeper like the Times ignores the idea that channels like Twitter are out there. The free press is freer than ever right now. The problem isn't that we're running out of news, it's how to make sense of it all. The NYT can play a key role in making sense of that. A lot of Web sources are just interested in pulling in the maximum amount of sources without curation.

Henry: Don't we need one place we can go to for accuracy?

David: Marcos makes an excellent point about the web economy being a kind of self-cleaning oven. The hive mind is pretty smart. To find out if there's a dirty bomb at Grand Central, the Times is a place you would stop, but not the only place. It's up to today's consumer. They have the power on their desktops to assemble information from a variety of reliable sources.

Marcos: If I go to the Times and they don't have anything about the story, I can assume it's not very important.

Henry: Then where do you go if the Times goes away?

Marcos: The money and the talent would be there to create a news organization that covers the core elements, maybe not the sports and entertainment, but the core journalism.

Henry: When journalism becomes profit-making, do people shy away from doing the hard work of verification?

David: The regional news business is very difficult with auto classifieds and real estate gone. It behooves us to move to other hybrid forms of local journalism. I don't want to give the impression I think journalism is rocket science and should be kept away from citizens. The difference is someone is willing to pay me for it. Part of the dirty bomb equation that would be solved by Twitter is who said it and what they were looking at. I curate my Twitter stream very carefully and when I see all the people I follow all looking at something, I know it's important.

If the Times and the Washington Post go away, it will be a long time before something grows to fill that gap.

It's good to have a few places where the story starts. We all can't decide on our own version of reality and then come together and have a civil discourse about it.

Henry: Is it possible that the age of publishers is over?

Greg: Professional journalists aren't going away. They may end up playing more of an editorial role than a reportorial role. AOL Seed (exhibiting at SXSW) is assigning stories to the crowd. You can earn $5 to take pictures of geeky stickers on someone's laptop. They'll pay you $50 to write a profile of a band. It's not the salary a journalist would want, but so many people have been doing it for free, they'll be willing to do it for a little money. A Times reporter might make $400 a day. He has to compete with a writer on Examiner.com who gets paid $2. For that $400, Examiner.com gets 200 stories, the Times gets one. There's no economic model that supports what the Times does anymore. That's what will drive the future.

Henry: Who does the investigative pieces?

Greg: Politico has 75 reporters. Gawker has more than 100. These places are growing much faster than newspapers ever did. Gawker now gets 400 million page views per month and it's only been around 10 years.

David: I think that there is no doubt that the Times is economically challenged. We made $19 million this year, but it's on a pattern of buyouts and carefully managed costs and we can't do that over the long term. But we are making money, which is more than a lot of nascent journalistic enterprises can say.

We have 18 million uniques and it doesn't stop there. Each of our reporters is twittering out. We're not sitting still. We have a bunch of mad scientists up in the belfry, innovating in breathtaking ways. Last week I spent time self-producing videos about the important stories of the day. If people are going to be consuming video in one-minute video grabs, we're going to give it a whirl. And historically, “giving it a whirl” hasn't been part of the Times culture. We came on the Web in 1994 and we're good at it. Whether will people will buy in to the metered approach is yet to be seen.

Question from the audience: In this country, we feel there's such a thing as unbiased reporting. In other countries, they understand the papers have bias. We need to educate our children in how to read the paper. How do we do that?

Marcos: We have to educate them that in a world where everyone can speak, not everyone will tell the truth. Previously, only certain people had the opportunity to try to convince the gullible, but now everyone does.

When an audience member said, “No one in this room expects Twitter to replace the New York Times,” she got a round of applause.