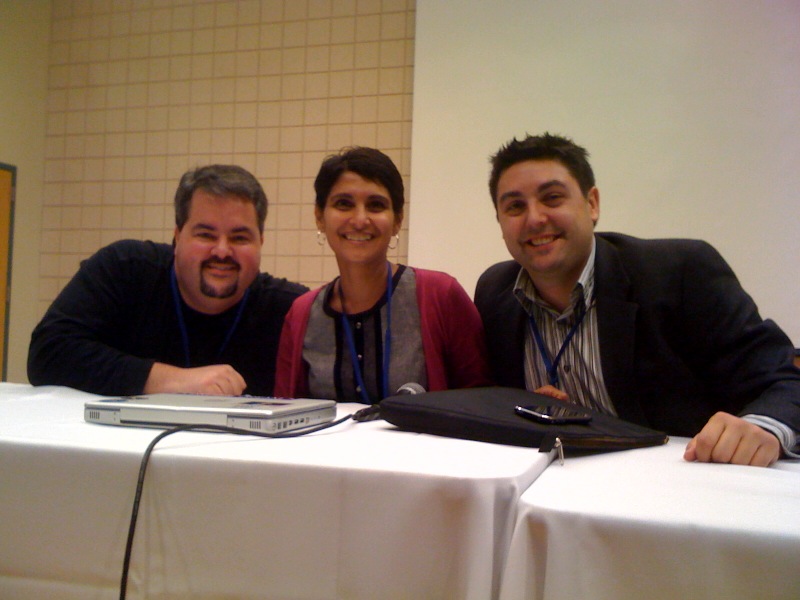 My notes from the "Who should own social media?" session at the Social Media Business Forum

I came in a bit late for this one. When I arrived, Jason was saying it's better to have a person who is active and engaged lead your social media strategy, regardless of what department they're in.

Ilina: You've got to look at how social media fits into your entire strategy, not just look at what you need to do on Twitter.

Jason: I worry about hiring the 20-something right out of college to represent your brand if they don't have an idea of how it ladders up to your strategy. Quite frankly, I was in my early 30s before I understood what tactics meant in relation to an overall strategy. But it's all about the individual. If you can find the right person and they're in their 20s, go for it.

Ilina: Until agencies get social media and figure out how to bill for it, marketing departments that work with those agencies won't get it.

Question: What do you do if your execs think they get it, but really don't?

Jason: You have to keep showing them what they're doing wrong and give them examples. Social media is still on the bottom of the bell curve. We're nowhere close to social media being a big part of business and commerce. We have to keep evangelizing and showing people what's important.

Gavin: People who aren't doing it "right" aren't going to see the results they want. If their goals are a certain number of followers, for instance, they won't get to that. Gavin follows the Pizza Hut "twintern" (who just got hired full-time apparently) and all she does is "tweet marketing speak." Gavin's example: Ruby Tuesday's calls their salad bar a "fresh garden bar." "Do I call it a 'fresh garden bar,' or do I call it a salad bar, because everybody knows what a salad bar is."

Ilina: Pizza Hut's move adds to the perception that social media is a fad. We need to educate people that they need to determine if they if they do indeed need a social media strategy and if so, to explore the best ways to do it.

Question: I'm 24 and I do have experience. How do I overcome that age stigma?

Jason: Show them you know what you're doing and they'll get it.
Ilina: Demonstrate that you understand social media is not just a tactic, but has to be part of a strategy.
Gavin: It's competence, and the ability to push back if necessary. Demonstrate thought leadership, for instance in a blog, outside of just what you do every day.

Question: Will social media be its own department, or are we putting a square peg in a round hole trying to say who should own it?

Jason: Saying "everyone should own social media" is a cop-out. Someone needs to drive the strategy, the training and coordinate the activities. (Amen!)

Ilina: It's like saying "everybody's is responsible for the brand." That's true, but it still should stay in marketing, or at least a department. It's got to be housed somewhere to keep things consistent.

Jason: I've told clients in the past that my job is to get them to the point of social media competency that they don't need me anymore.

Question from Ryan Boyles: Marketing can't own social media because you have so many other people in customer-facing roles.

Ilina: Marketing owns the brand and in a smart organization they understand that the brand permeates all the way down to the janitor. We held brand messaging meetings at American Express with people throughout the organization including customer service. The brand drives how you answer the phone, what your sales materials look like, everything. That has to be housed in marketing, not just from a sales perspective but because they will understand the more intricate meaning about your brand.

Gavin: In ten years that's a different question, but right now you need to have somebody who understands it and pushes it forward. You have to start with someone who knows it, and then it will spread across the organization. It will move to training, product development, our executive chefs, etc. It has to sit somewhere and that's marketing for now.

Question: We're all new to social media no matter how long we've been participating, since it's always changing. Tell us about a mistake you made and what you learned.

Jason: When I first got started I did not emphasize search enough, because 85 percent of all transactions on the web start with search. Social media helps with organic search, but every client has as priority one or two optimizing search. I learned that the hard way with some clients. Please make sure that search is at or near the top of your list.

Ilina: One of the key things I flubbed with clients early on was not telling them to listen first, instead of just jumping in. You have to establish rapport first.

Gavin: I'll share a corporate example. Our CEO tweets. I've been at the company since June. In July we raised additional public money to pay down some debt. He tweeted, "I'm in New York and just raised an additional $70 million to strengthen our brand." That tweet violated the FTC's quiet period requirements. It got picked up locally and nationally. We didn't suffer any consequences but we could have. It became my responsibility because it was "my messaging platform." It was one of our biggest mistakes not to make everyone in the loop and know that people would be tweeting.

Question: Clients are looking for agenices that can integrate PR and social media. Should companies outsource to two different agencies?

Jason: It depends on the client competency and need. You need to understand that if people at your agency are going to do social media for you, you need to make them aware of the brand and give them access. What we need to be doing moving forward is training our clients and brands to own social media themselves so they never have to ask that of agencies in the future. Do you trust someone who works at Ford, or someone who works at an agency that works for Ford? I'm always going to go to the root.

Ilina: It's irrelevant to the customer who pushes the buttons. It's fine if an agency needs to handle it while a client gets up to speed and great to integrate with PR, but a client shouldn't assume the kind of risk it would take to hand it over to an agency.

Gavin: Agencies have a hard time because they aren't inside your organization. If they don't know the right people to talk to and to call into the meetings, it's going to be a fail.