If you're active in social media, especially if it's part of your job, you've probably gotten used to the feeling that you're doing everything wrong, or that you aren't doing enough. In the past few weeks, I've been told - directly or indirectly - that a Facebook fan page is vital to our brand and we need to get one ASAP, that we're using Twitter wrong, that we need a much more aggressive video strategy in social media, that we need to radically expand our blogging program and that I shouldn't be allowed to have my job because I moderate comments on this blog, instead of making them open. I'm sure I could think of more.

That's one of the hazards of reading the social media thought leaders, and the people who, for whatever reason, can do whatever they want in social media. If you, like me, are trying to integrate social media into a large company, you have a lot more factors to consider than a startup with five people or a small company with a one- or two-person marketing department. 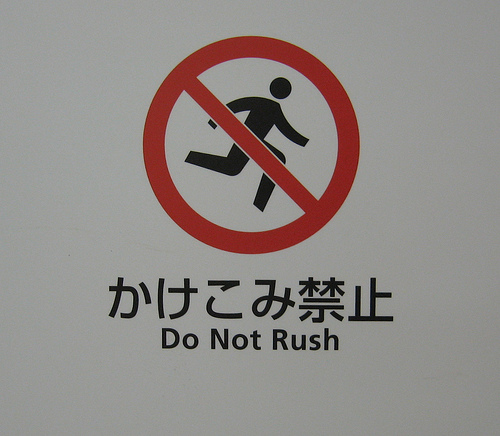 That doesn't mean we don't have a sense of urgency, or that we don't understand the value of social media. But it does mean that it takes some time to make major changes.

I try to keep that in mind when I read about the next big thing we aren't doing yet, or just as accurately the next big thing from six months ago we're still investigating. Or the thing we're doing wrong, or that we aren't pushing hard enough. We have to set priorities and address what makes the most sense for us, and that means we'll never be doing everything we could, or doing everything the way we're "supposed" to be.

If you've never worked in a big corporate environment, it's easy to say, "Just go for it and see what happens." If you're in it on a daily basis, you know that consensus takes time but yields the strongest results.

There are a lot of experts out there who will tell you what you need to do. Read what they have to say. Study the success stories and case studies from companies like yours. Keep up to date with the news and trends and tech.

But only you can decide what will work best in your organization.