David Meerman Scott has a great post this morning called "Social Media is the new punk rock", with a link to a very clever video created by Engage | ORM. The analogy is that punk rock was a reaction to corporate control of the music industry, they used whatever tools they could to be heard, and they cared more about results than about production values. I'm sure you see the social media analogy. Neat idea.

The video also explores how the big record labels tried to jump on the bandwagon, watered punk down and created New Wave and power pop. They also wonder if that's what corporations will do with social media.

I bought "Never Mind the Bollocks" in maybe 1981, and it scared the hell out of me. It completely challenged everything I thought I knew about music. But within a few months, I wasn't buying Supertramp records anymore. The Clash will probably always be my favorite band of all time. (Although unlike David, I never got to see them.) 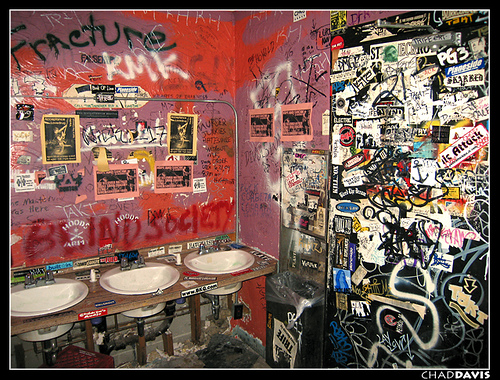 Corporations are interested in social media because they (we) see the potential for communicating with people in ways people want to be communicated with. And yeah, we see the potential to make money. This is no surprise to anyone. And because we're in business to, you know, be in business, we like to know the value of our activities. We like to quantify. And yes, we like ROI. I spend a lot of time telling people that social media has many intangible values, but I need to be able to show the tangible as well.

Will this destroy social media? No. Will it change it? Of course, just like the Internet changed when it became widespread and easy.

The musical movement that began with The New York Dolls and The Ramones and The Sex Pistols eventually led to Blink 182 and Panic at the Disco, but it also spurred a DIY ethic that's still around today (and augmented by social media tools like MySpace).

Becoming part of the conversation, even if we need to tie revenue goals to it, will have a beneficial effect on corporations as well. For one thing, I'm convinced social media will finally help put the nail in the coffin of boring, static corporate web pages. It will also show us that we need to be listening as much as talking. Marketing people are saying that a lot now, and I think they'll soon start to actually believe it.

Will the self-appointed guardians of the purity of social media be happy? No. Will the overall effect be positive? Yes.

We're at a point with social media where it's going to be hard to stay punk, and I say that in full knowledge that in this analogy I'm not the guy with the safety pin in his cheek; I'm the guy with the tiny pony tail and brand new skinny tie, hanging out in basement clubs looking for the next big thing and hoping nobody spits on him.