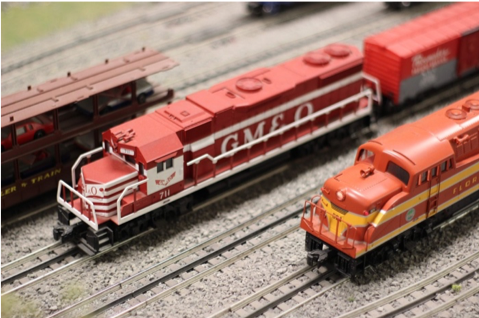 I was sitting in a model railroad club meeting when one of our more enthusiastic young members said, "Wouldn't it be cool if we could make a computer simulation, with trains going between stations and all. We could have cars and engines assigned to each train and timetables and…"

So, I thought to myself, “Timetables… I bet SAS can do that easily… sounds like something fun for Mr. Dates and Times."

As it turns out, the only easy part of creating a timetable is calculating the time. SAS handles the concept of elapsed time smoothly. It’s still addition and subtraction, which is the basis of how dates and times work in SAS. If a train starts at 6:00 PM (64,800 seconds of the day) and arrives at its destination 12 hours (43,200 seconds) later, it arrives at 6:00 AM the next day. The math is start time+duration=end time (108,000 seconds,) which is 6:00 AM the next day. It doesn’t matter which day, that train is always scheduled to arrive at 6:00 AM, 12 hours from when it left.

It got a lot more complicated when the group grabbed onto the idea. One of the things they wanted to do was to add or delete trains and adjust the timing so multiple trains don’t run over the same track at the same time. This wouldn’t be that difficult in SAS; just create an interactive application, but… I’m the only one who has SAS. So how do I communicate my SAS database with the “outside world”? The answer was Microsoft Excel, and this is where it gets thorny.

It’s easy enough to send SAS data to Excel using ODS EXCEL and PROC REPORT, but how could I get Excel to allow the club to manipulate the data I sent?
I used the COMPUTE block in PROC REPORT to display a formula for every visible train column. I duplicated the original columns (with corresponding names to keep it all straight) and hid them in the same spreadsheet. The EXCEL formula code is in line 8.

I also added three rows to the dataset at the top. The first contains the original start time for each train, the second contains an offset, which is always zero in the beginning, while the third row was blank (and formatted with a black background) to separate it from the actual schedule. 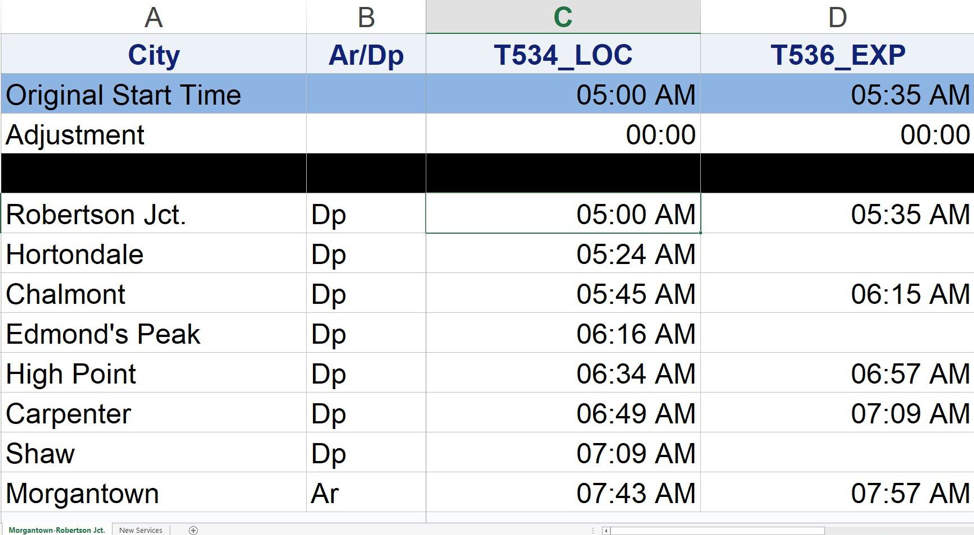 The next problem was moving a train to an earlier starting time, because Excel has no concept of negative time (or date—a date prior to the Excel reference date of January 1, 1900 will be a character value in Excel and cause your entire column to be imported into SAS as character data.) Similarly, you can’t enter -1:00 as an offset to move the starting time of our 5:35 AM train to 4:35 AM. Excel will translate “-1:00” as a character value and that will cause a calculation error in Excel. In order to move that train to 4:35 AM, you have to add 23 hours to the original starting time (Column D, Figure 2.) 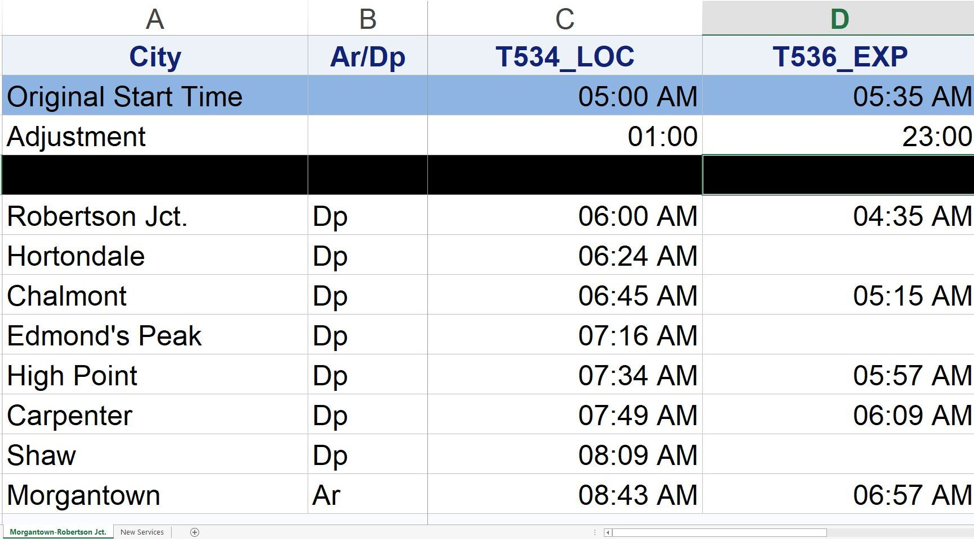 After the users adjust the schedules, it’s time to return our Excel data to SAS, which creates more challenges. In the screenshot above, T534_LOC is the identifier of a specific train, and the timetable is kept in SAS time values. Unfortunately, PROC IMPORT using DBMS=XLSX brings the train columns into SAS as character data. T534_LOC also imports as the actual Excel value, time as a fraction of a day. 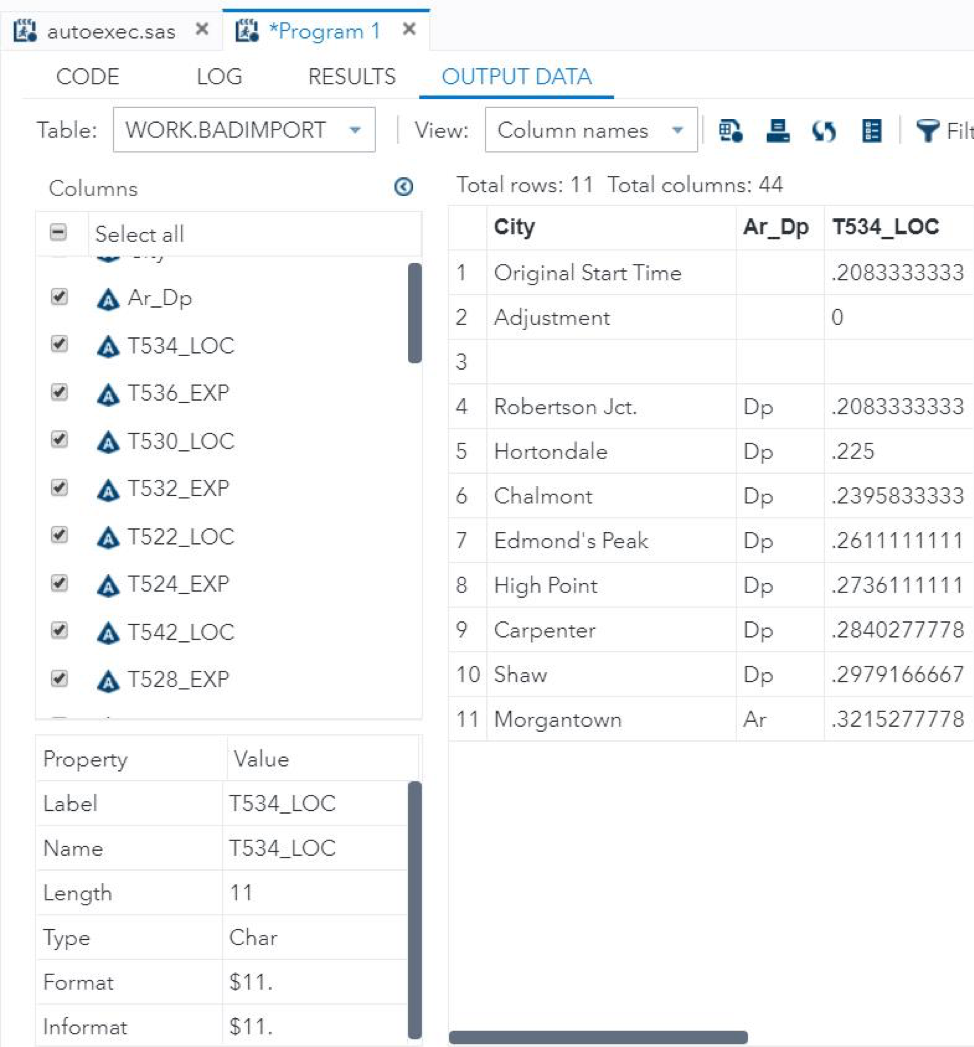 Figure 3: How the Schedule Adjustment File Imports to SAS

While I can fix that by converting the character data to numeric and multiplying by 86,400, I still need the original column name of T534_LOC for the simulation, so I would have to rename each character column and output the converted data to the original column name. There are currently 146 trains spread across 12 files, and that is a lot of work for something that was supposed to be easy! Needless to say, this “little” side project, like most model railroads, is still in progress. However, this exercise in moving time data between Microsoft Excel and SAS gave me even more appreciation for the way SAS handles date and time data.

Figure 4 is a partial sample of the finished timetable file, generated as an RTF file using SAS. The data for trains 534 and 536 are from the spreadsheet in Figure 1. 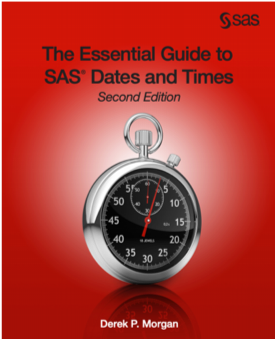 Want to learn more about how to use and manipulate dates, times, and datetimes in SAS? You'll find the answers to these questions and much more in my book The Essential Guide to SAS Dates and Times, Second Edition. Updated for SAS 9.4, with additional functions, formats, and capabilities, the Second Edition has a new chapter dedicated to the ISO 8601 standard and the formats and functions that are new to SAS, including how SAS works with Universal Coordinated Time (UTC). Chapter 1 is available as a free preview here. 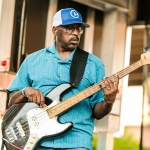 Derek is currently a principal statistical programmer at PAREXEL International, and has presented many times at local, regional, and international SAS User Group meetings and conferences. He has been a SAS user for over 30 years, and is author of the SAS Press Book, "The Essential Guide to SAS® Dates and Times". In his spare time, Derek plays bass guitar, and has performed with three members of the Rock and Roll Hall of Fame.