The purpose of this blog post is to demonstrate a SAS coding technique that allows for calculations with multiple variables and multiple observations across a SAS dataset. This technique can be useful for working with time series, clinical trials, - in any data step calculations involving values from different observations. 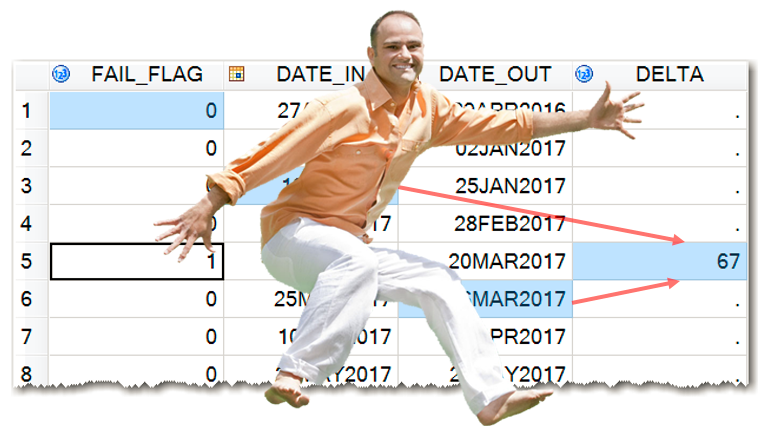 What do we want?

In the spirit of my earlier post Combine and Conquer with SAS, this technique combines the functionality of the LAG function, which allows us to retrieve the variable value of a previous observation from a queue, with an imaginary, non-existent in SAS, LEAD function that reads a subsequent observation in a data set while processing the current observation during the same iteration of the DATA step.

LAG<n> function in SAS is not your usual, ordinary function. While it provides a mechanism of retrieving previous observations in a data table, it does not work “on demand” to arbitrarily read a variable value from a previous observation n steps back. If you want to use it conditionally in some observations of a data step, you still need to call it in every iteration of that data step. That is because it retrieves values from a queue that is built sequentially for each invocation of the LAG<n> function. In essence, in order to use the LAG function even just once in a data step, you need to call it every time in each data step iteration until that single use.

Moreover, if you need to use each of the LAG1, LAG2, . . . LAGn functions just once, in order to build these queues, you have to call each of them in every data step iteration even if you are going to use them in some subsequent iterations.

The LEAD function is implemented in Oracle SQL and it returns data from the next or subsequent row of a data table. It allows you to query more than one row in a table at a time without having to join the table to itself.

There is no such function in SAS. However, the POINT= option of the SET statement in a SAS data step allows retrieving any observation by its number from a data set using random (direct) access to a SAS data set. This will allow us to simulate a LEAD function in SAS.

But why do we need two separate functions like LAG and LEAD in order to retrieve non-current observations. In essence, these two functions do the same thing, just in opposite directions. Why can’t we get by with just one function that does both backwards and forwards “hopping?”

Ideally, we would like to construct a new single function - let’s call it HOP(x, j) - that combines the best qualities of both LAG and LEAD functions. The two arguments of the HOP function would be as follows:

x – SAS variable name (numeric or character) the value of which we are retrieving;

Alternatively, we could have the first argument as a column number, and the second argument as a row/observation number, if we wanted this function to deal with the data table more like with a matrix. But relatively speaking, the method doesn’t really matter as long as we can unambiguously identify a data element or a cell. To stay within the data step paradigm, we will stick with the variable name and offset from the current observation (_n_) as arguments.

Let’s say we have a data table SAMPLE, where for each event FAIL_FLAG=1 we want to calculate DELTA as the difference between DATE_OUT, one observation after the event, and DATE_IN, two observations before the event:

That is, we want to calculate DELTA in the observation where FAIL_FLAG = 1 as

With the HOP() function, that calculation in the data step would look like this:

It would be reasonable to suggest that the hop() function should return a missing value when the second argument produces an observation number outside of the dataset boundary, that is when

_n_ + j < 0 or _n_ + j > num, where _n_ is the current observation number of the data step iteration; num is the number of observations in the dataset; j is the offset argument value.

Do you see anything wrong with this solution? I don’t. Except that the HOP function exists only in my imagination. Hopefully, it will be implemented soon if enough SAS users ask for it. But until then, we can use its surrogate in the form of a %HOP macro.

If you need to build an expression to do calculations with several variables from various observations, you would need to first retrieve all those values by invoking the %hop macro as many times as the number of the values involved in the expression.

Here is the syntax of the %HOP macro, which has four required parameters:

Using this %HOP macro we can rewrite our code for calculating DELTA as follows:

Note that we should not have temporary variables TEMP1 and TEMP2 listed in a RETAIN statement, as this could mess up our calculations if the j-offset throws an observation number out of the dataset boundary.

In case you are wondering where you can download the %HOP macro from, here it is in its entirety:

Of course, it is “free of charge” and “as is” for your unlimited use.

Please provide your feedback and share possible use cases for the HOP function/macro in the Comment section below. This is your chance for your voice to be heard!