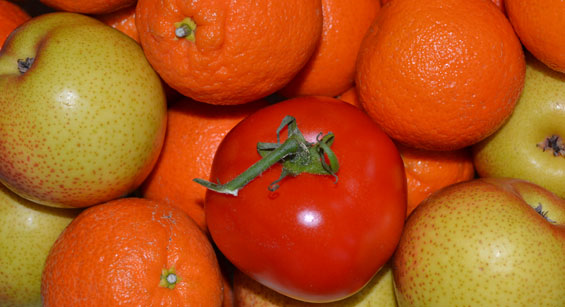 The ancient political maxim “divide and conquer” (Lat. “dīvide et īmpera”) has been used for millennia in politics, sociology, and psychology, mainly to manipulate people. In the last two centuries, however, this principle has also been adopted by computer science. It is widely used in computer programming, primarily in computer algorithms such as binary search, quick sort, Fast Fourier Transform (FFT), parallel processing algorithms – to name a few.

A typical Divide and Conquer algorithm consists of the following steps:

However, in this blog post we’ll reverse the “divide and conquer” principle and go backwards from step three to step two, to combine and then conquer.

In our day-to-day programming activities, we may not need to divide a problem in order to solve it. In many cases, we deal with small pieces of a puzzle (language elements) provided by the SAS programming language, and we solve some larger problems by combining those elements.

Suppose you have a variable x in a SAS table on which you need to report with the following requirement. Depending on the variable value, you will need to apply different SAS formats:

You may get away with proc format’s picture statement with a proper multiplier – but good luck with that. Fortunately, there is a much better way of solving this problem. Did you know that you can use already existing formats as labels in proc format’s value statement? In other words, we can combine several SAS formats while defining another SAS format.

The above problem is easily solved by defining a new custom format as a combination of different PERCENTw.d formats as follows:

Here is what this format does: 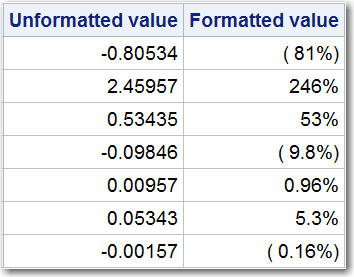 You can combine any other existing formats as needed, including mixing and matching SAS-supplied formats and user-defined formats. You can even use existing formats within the PICTURE statement of the PROC FORMAT. For example, the following custom format will format dollar values between 0 and 1 as cents (e.g. 75¢) while dollar values greater than 1 as dollars (e.g. $9,340):

Here is what this format does: 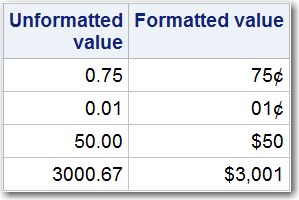 Suppose you have defined several SAS data libraries, such as

You can then logically combine (concatenate) them into a single library:

Yes, you can combine apples with oranges, and even with tomatoes, and that will enable you to access the SAS data sets in several libraries with one libref.

SAS will even allow using commas between the concatenated libraries:

It is important to know that while SAS has no problem combining multiple libraries that contain same-named files, when you reference such a file, the concatenated libraries are searched in order and the first occurrence of the specified file is used.

This proves to be extremely useful when you have multiple versions of the same tables that you promote between different environments during a system development cycle. For example, you might have a SAS data table named SALES in either some or all of the development, testing, and production environments. You can define librefs for each environment as well as a libref for the combined environment:

You can combine SAS format libraries to achieve similar version prioritization as in the above case of SAS data libraries using FMTSEARCH= System Option:

This implies that your SAS formats are stored in the catalogs named FORMATS in the above specified libraries: prodlib.FORMATS, testlib.FORMATS, devllib.FORMATS.

One must remember that if not specified, WORK and LIBRARY libraries by default take precedence in the order in which SAS formats are searched, making the above options statement effectively look like:

If WORK and LIBRARY libraries are specified in the fmtsearch= then the default is not applied and the search order is as specified.