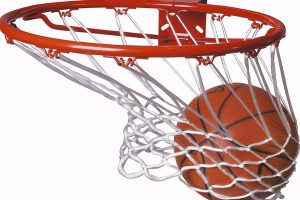 My high school basketball coach started preparing us for the tournaments in the season’s first practice. He talked about the “long haul” of tournament basketball, and geared our strategies toward a successful run at the end of the season.

I thought about the “long haul” when considering my brackets for this year’s NCAA Tournament, and came to this conclusion; instead of seeking to predict who might win a particular game, I wanted to use analytics to identify which teams were most likely to win multiple games. The question that I sought to answer was simply, “could I look at regular season data, and recognize the characteristics inherent in teams that win multiple games in the NCAA Tournament?”

I prepared and extracted features from data representing the last 5 regular seasons. I took tournament data from the same period and counted numbers of wins per team (per season). This number would be my target value (0, 1, 2, 3, 4, 5, or 6 wins). Only teams that participated in the tournaments made the analysis.

I used SAS Enterprise Miner’s High Performance Random Forest Node to build 10,000 trees (in less than 14 seconds), and I determined my “top 10 stats” by simply observing which factors were split on the most.

Here are the results (remember that statistics represented are from the regular season and not the tournament), my “top 10 statistics to consider.”

Winners win, right?  It is evident this is true the further a team moves into the tournament.

Teams that advance in the tournament have beaten teams by wide margins during the regular season – this means that in some game over the course of the year, a team let go and won big! From a former player’s perspective, it doesn’t matter “who” you beat by a wide margin, but rather do you have the drive to crush the opponent? 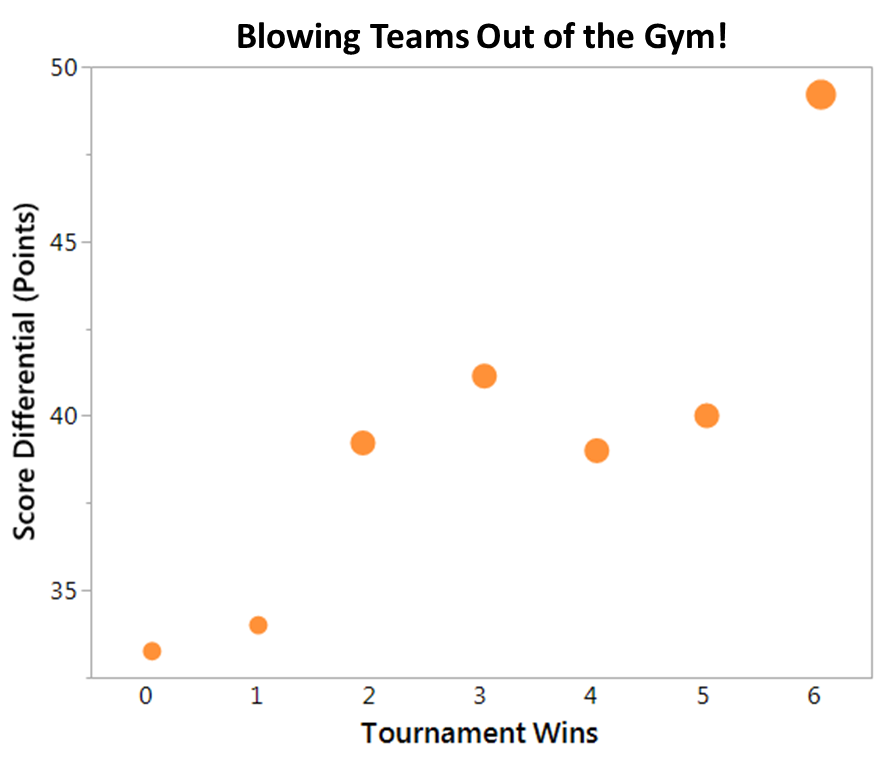 Teams that take care of and distribute the ball tend to be making assists instead of turnovers. From my perspective, the ATO indicates whether or not a team dictates the action.

4 --- Winning percentage on the road

We’re already noted that overall winning percentage is important, but it’s also important to win on the road since the tournament games are rarely played on a team’s home floor!

Winning games on the big stage requires both scoring and defense! A ratio above 1 indicates that you score the ball better than you allow your opposition to score.

6 --- Ratio of turnovers to the turnovers created (TOR)

I recall coaches telling me that a turnover committed by our team was essentially a 4-point play: 2 that we didn’t get, and 2 they did.

Close games build character, and provide preparation for the tournament.

Teams that win more games in the tournament defend the 3 point shot only slightly better than the other teams, but they are twice as consistent in doing it! So, regardless of who’s coming to play, look for some sticky D beyond the arc! 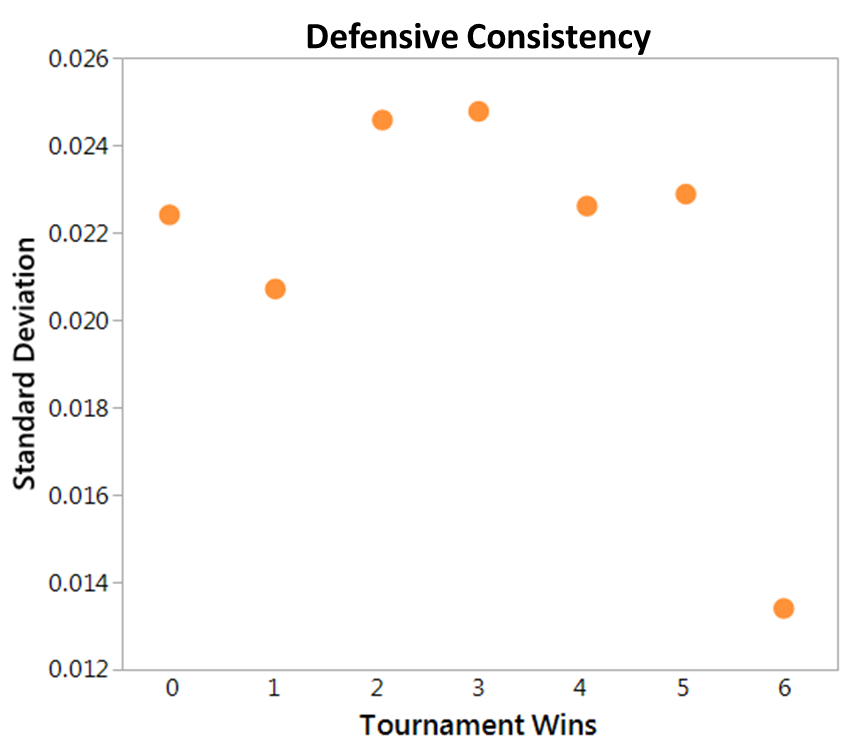 Teams that win are good at the stripe! Free throws close games. Make them and get away with win!

Teams that win the most games block shots. They play defense, period.

Next steps? Take what’s been learned and apply it to this year’s tournament teams, and then as Larry Bird used to do, ask the question, “who’s playing for second?”

In addition to SAS Enterprise Miner, I used SAS Enterprise Guide to prepare the data for analysis and, I used JMP’s Graph Builder to create the graphics. The data was provided by Kaggle. 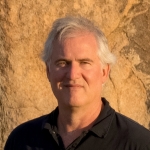 
Sam Edgemon is a Consultant in the SAS US Business Analytics Consulting Practice, and is responsible for supporting both pre-sales and post-sales engagements. With over twenty years of SAS Product and JMP Experience, project roles range from that as a contributing analyst to project lead and all aspects of managing technically oriented tasks. Experience comes from many areas: Government, Environmental, Biological Surveillance, Health Care, Pharmaceutical, Automotive, Financial Services, Education, Gaming, Sports, Recreation, and Agriculture. Sam holds a B. S. in Mathematics and a B.S. in Statistics from the University of Tennessee, and certifications in Data Science (Johns Hopkins University), Social Physics (M.I.T.), Innovation and Design (University of Virginia), and Sabermetrics (Boston University).