Impressive innovations and exciting announcements took center stage (literally) at Opening Session of SAS Global Forum 2016. Near the end of the session, SAS CEO Jim Goodnight shared news about SAS’ new architecture that had everyone abuzz.

“We are unveiling a quantum leap forward in making analytics easier to use and accessible to everyone,” Goodnight said. “It’s a major breakthrough and it’s called SAS Viya.”

Goodnight was also quick to point out that SAS Viya will work with customers’ existing SAS 9 software.

Goodnight invited Vice President of Analytic Server Research and Development Oliver Schabenberger, who led the development work for SAS Viya, to join him on stage to discuss the new cloud-based analytic and data management architecture. 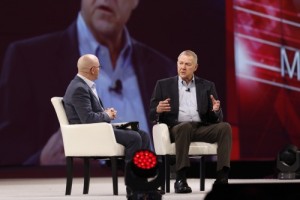 “We see great diversity in the ways our customers approach and consume analytics,” Schabenberger explained. “From small data to big data. From simple analytics to the toughest machine learning problems. Data in motion and data at rest. Structured and unstructured data. Single users and hundreds of concurrent users. In the cloud and on premises. Data scientists and business users.”

SAS has developed a truly unified and integrated modern environment that everyone can use, whether you are a data scientist or a business analyst. “The beauty of SAS Viya is that it’s unified, open, simple and powerful, and built for the cloud,” said Schabenberger. “Today we are moving to a multi-cloud architecture.”

Goodnight encouraged customers to be “sure to try it out. I think you will enjoy the new SAS Viya.”

The SAS Viya procedural interface will be available to early adopters in 30 days, with visual interfaces scheduled for a September release. Customers can apply to be part of the SAS Viya early preview program.

SAS Viya wasn’t the only “star” of the evening.

Goodnight lauded the company’s continuing efforts to globalize and expand ways to make our software faster and easier to use. On the development side, he highlighted SAS Customer Intelligence 360, SAS® Forecast Studio, SAS® Event Stream Processing, SAS® Cybersecurity and the next generation of high performance analytics.

Executive Vice President and SAS Chief Revenue Officer Carl Farrell took the stage to share examples of the many diverse uses of SAS. “Today, our customers are so much more educated on big data and analytics,” Farrell said. “CEOs are realizing that analytics can help them draw more value for their business around that data.”

Farrell singled out several customers including Idea Cellular Ltd. in India, which is processing a billion transactions a day -- something that was impossible before high performance analytics – and Macy’s customer intelligence project that is focused on making real-time offers to customers as they walk through a store, creating a personal and immediate experience.

Farrell also said he was so proud of the SAS work being done outside of business, in the data for good realm, specifically mentioning work in Chile combatting the Zika virus and the work of the Black Dog Institute, which conducts research to improve the lives of people with mental illness.

“Our customers are doing amazing things with SAS that we couldn’t have imagined 40 years ago, and this is just the tip of the iceberg and there’s so much more to come,” Farrell said. 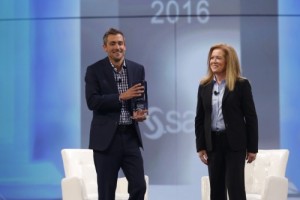 Speaking of stars, Senior Vice President of Technical Support Annette Harris applauded the SAS Super Users for their work in support communities. “SAS users have a rich tradition of helping each other in peer-to-peer forums,” said Harris.

Harris also recognized the 2016 SAS User Feedback Award winner, Jeromey Farmer, a Treasury Officer from the Federal Reserve Bank of St. Louis, noting that SAS gained strong insights from Farmer into how SAS can more seamlessly integrate in a complex and secure environment.

SAS Executive Vice President and Chief Marketing Officer Randy Guard took the stage to announce SAS® Analytics for IoT and to talk about some macro trends he is seeing, including the digital transformation taking place in business and technology. He cited an IDC report that stated by the end of 2017, two-thirds of all CEOs will have digital transformation – across their company – at the top of their agenda.

Customers want help in managing their data, including streaming data, and want analytics embedded in their applications, he added. He calls the latter “analytics any way you want it.”

Customers also want software as a service, including self-service, and want to know how to monetize the connectivity and continuous load of data. “That hits our sweet spot in analytics at SAS,” he said. “The transformation is under way and we are investing money to make this transition smoother for our customers.”

Woven throughout Opening Session were references to SAS’ 40 years in business.

Asked about what has changed over the years, Goodnight recalled that when SAS started, there was one product on a single machine. Now we have more than 200 products on dozens of machines. Back then, a computer could process about 500 instructions a second. Now it’s up to 2 to 3 billion instructions a second. The very first disk drives were two feet across, with tapes containing about five million bytes. Now we can get 1.2 terabytes in the size of a K-cup.

As for key milestones over the 40 years, Goodnight said two things came to mind. One was the introduction of multivendor architecture in the mid-1980s so our software could run on all platforms, and the other was the advent of massively parallel computing.

Not surprisingly, given the milestone anniversary year for SAS, the Opening Session ended with a video retrospective looking back on world news from the 1970s through today, with a cameo appearance by Goodnight from the early days of SAS.

If you want to view a recording of Opening Session, visit the SAS Global Forum Video Portal.