Now, we all know by now that I'm not a programmer (that makes me very sad sometimes and may frustrate some of you at times), but I know a good paper and presentation when I see one. Christopher Bost knows how to teach a topic. I went to his Tuesday afternoon SAS Global Forum presentation because his paper sounded so interesting. (The room was packed, and no one left, so there must have been others who agreed with me.)

Bost's paper, Selecting All Observations When Any Observation Is of Interest, was written for those who work with medical claims data, fund balances, insurance claims data (you get it - any large data set that might contain multiple observations per person). His paper and presentation were about trading efficiencies - Can you sacrifice a little time processing the data, if the trade is a gain in a simpler way of coding?

According to Bost, a common method for selecting all observations when any observation is of interest is to use a match-merge. This requires three steps:

"By the way, I want to go on record as saying that I did this the most inefficient way possible because I wanted to show how efficient PROC SQL is," Bost told the audience with a grin. "You can do it more efficiently." (See the code in his paper.)

To put proof to Bost's pudding, he provided a list of pros and cons. First, he says that DATA step works fine and everybody should know how to do it, but what if the files were huge? It took three DATA steps and two PROC SORT steps on his tiny example data set.

Here's the order when writing a PROC SQL clause (I tried to take a picture of this, so Bost sent me his slide): 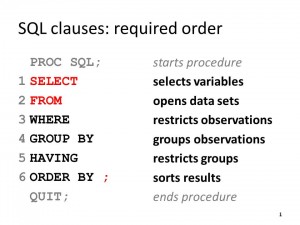 Bost chose two methods in PROC SQL, but he says there are many PROC SQL methods that he could have chosen. He chose to show the audience a SUBQUERY and the GROUP BY and HAVING clauses. (Again, I won't include the code here. Bost has done a better job than I could at explaining it in his paper.)

Pros of PROC SQL methods used in his paper:

Check out Bost's paper, and if you get a chance to hear him present (teach), don't pass it up!!

These code examples are provided as is, without warranty of any kind, either express or implied, including but not limited to the implied warranties of merchantability and fitness for a particular purpose. Recipients acknowledge and agree that SAS Institute shall not be liable for any damages whatsoever arising out of their use of this material. In addition, SAS Institute will provide no support for the materials contained herein.