Disasters happen every day. Often times they occur at inconvenient hours and in remote locations. So it’s important to have a plan - before the emergency - to get qualified personnel to those locations in the most efficient way. Pilots are an example of qualified personnel who could act as “first responders” in these situations.

At SAS Global Forum 2012, I saw a presentation by Andrew Hummel, General Manager, Crew Resources at Delta Air Lines about his use of SAS to create a US “First Responders Directory” by aligning pilot residences with airport locations. Now that’s preparation for the unknown.

Delta Air Lines operates formal corporate emergency response teams, but those are often set up in centralized locations and may not be as effective when responding to disasters in rural areas or during non-business hours. That’s where the pilots come in. Throughout the US, Delta Air Lines has more than 10,000 pilots who could act as first responders to the more than 250 airports that are sites designated to respond to emergencies. Identifying which pilots live the closest to airports through a directory is critical information during a crisis when those pilots could be called to drive to the airport immediately, at any time of day.

And we're talking about a ton of data here, given the number of pilots across the country. But SAS is able to compute the resulting 3 million calculations in a matter of seconds. The final directory lists how far each pilot lives from each airport, see example report created by PROC REPORT below (click to enlarge). 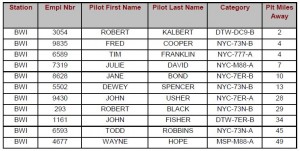 Delta Air Lines can then quickly match first responders to any emergency location in the US.

Check out the full paper to see exactly how the report was developed. Can SAS be applied to create critical information for a crisis in your industry? Feel free to share those examples in the comments.

These code examples are provided as is, without warranty of any kind, either express or implied, including but not limited to the implied warranties of merchantability and fitness for a particular purpose. Recipients acknowledge and agree that SAS Institute shall not be liable for any damages whatsoever arising out of their use of this material. In addition, SAS Institute will provide no support for the materials contained herein.

Anna builds customer relationships through communication strategies that reach SAS practitioners where they are. From managing online communities to editing blogs and newsletters to producing videos, Anna delivers information that makes it easy – and fun – to learn SAS.