Here in the US, we recently had a new Supreme Court Justice appointed. This is a very important position, and judges usually serve until they retire or die. My buddy Rick gave me a heads-up that there was a table of all the past & present justices on Wikipedia, and he thought I might have fun graphing the data ... and I did!

Before we get started, here's a selfie from my friend Karen to get you in the mood. She has a lot of political energy, and made the long trip to Washington DC last week to support her views (she even got invited to visit some of the senators, who gave her a personal thanks for showing up!) 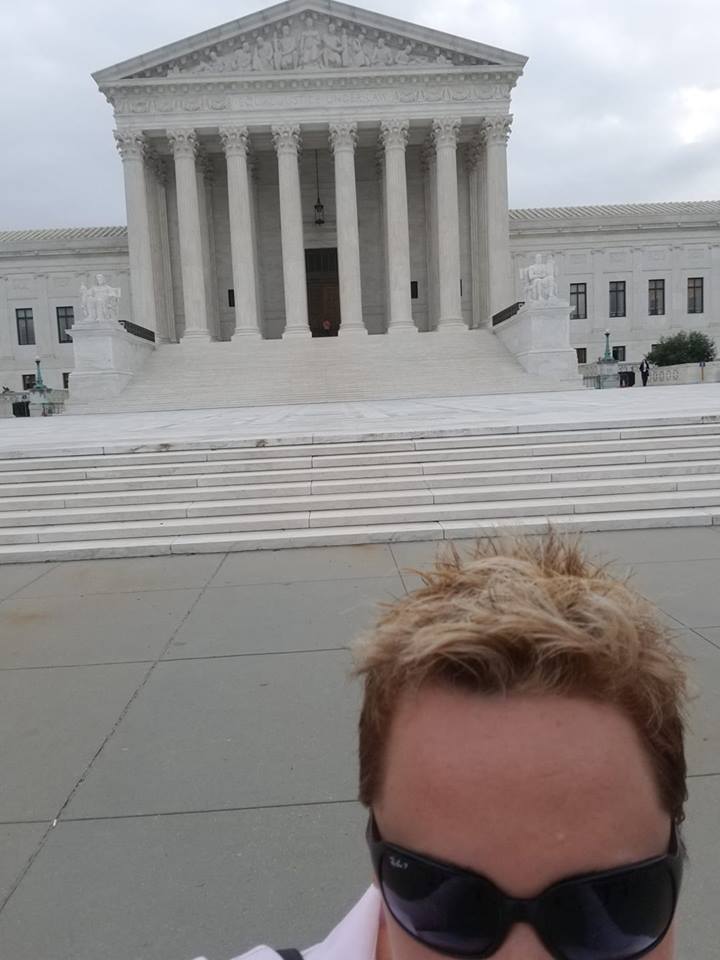 And now, let's analyze some data about past & present Supreme Court Justices! I started by going to the Wikipedia page Rick had pointed me to, and had a look at their timeline graph. Oh Lordy - it was literally a visual assault on my eyes! 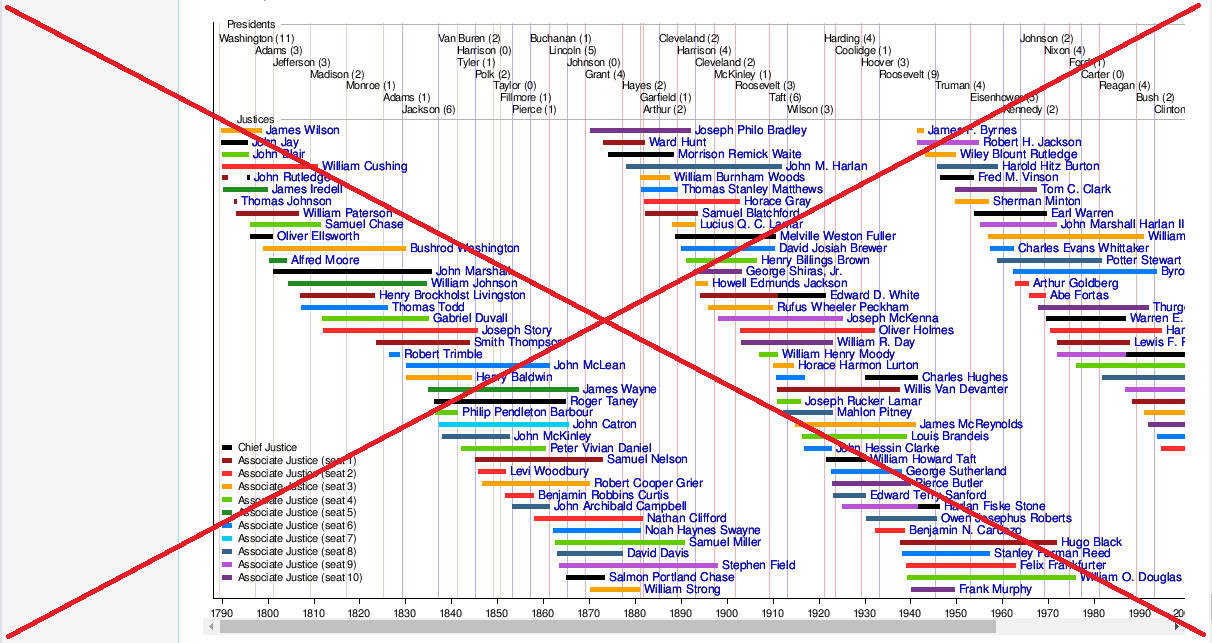 What's wrong with their graph? Here's a list of my main complaints:

With this being a topic that people are interested in this week, I felt a need to create a better graph! Fortunately they had a table of all the data in the Wikipedia page. Here's a small sample:

The table wasn't in an easily-consumable form (such as a csv text file, or a spreadsheet), therefore I resorted to copy-n-pasting it into a text file, and then importing it into SAS. The text file is a bit tricky to read, since each row of the table is split into multiple lines in the text file ... but SAS is very flexible in that regard, and is a crackerjack at parsing individual value out of text, as long as there is a consistent pattern and/or delimiter. If you're curious about the details, take a look at my code via this link. Below is a sample of what the text file looked like: 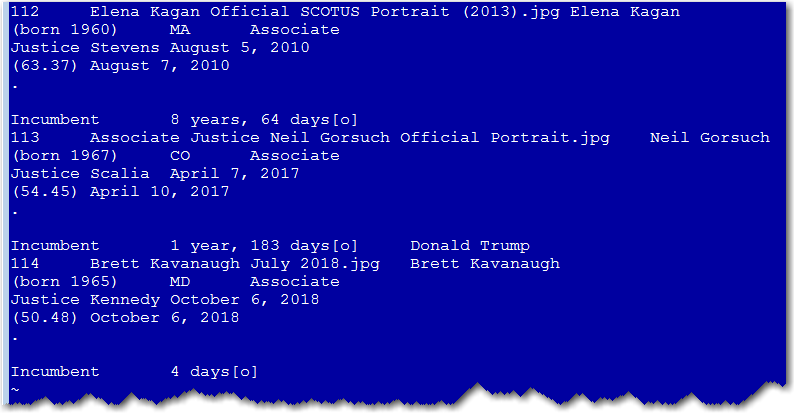 And here's a sample of what the SAS table looked like, after parsing all the important value out of the copy-n-pasted text.

And then, with a bit of SAS graphing magic, I created the following custom timeline graph. I don't try to show as many things as the Wikipedia graph, and I think mine is much easier to get your brain around. Click the image below to see the interactive version, with HTML mouse-over text and drilldowns. And if you would prefer to see the graph sorted so that the first justices are at the top, here's a link to an alternate version where I used gplot's vreverse option to sort the y-axis the other way. 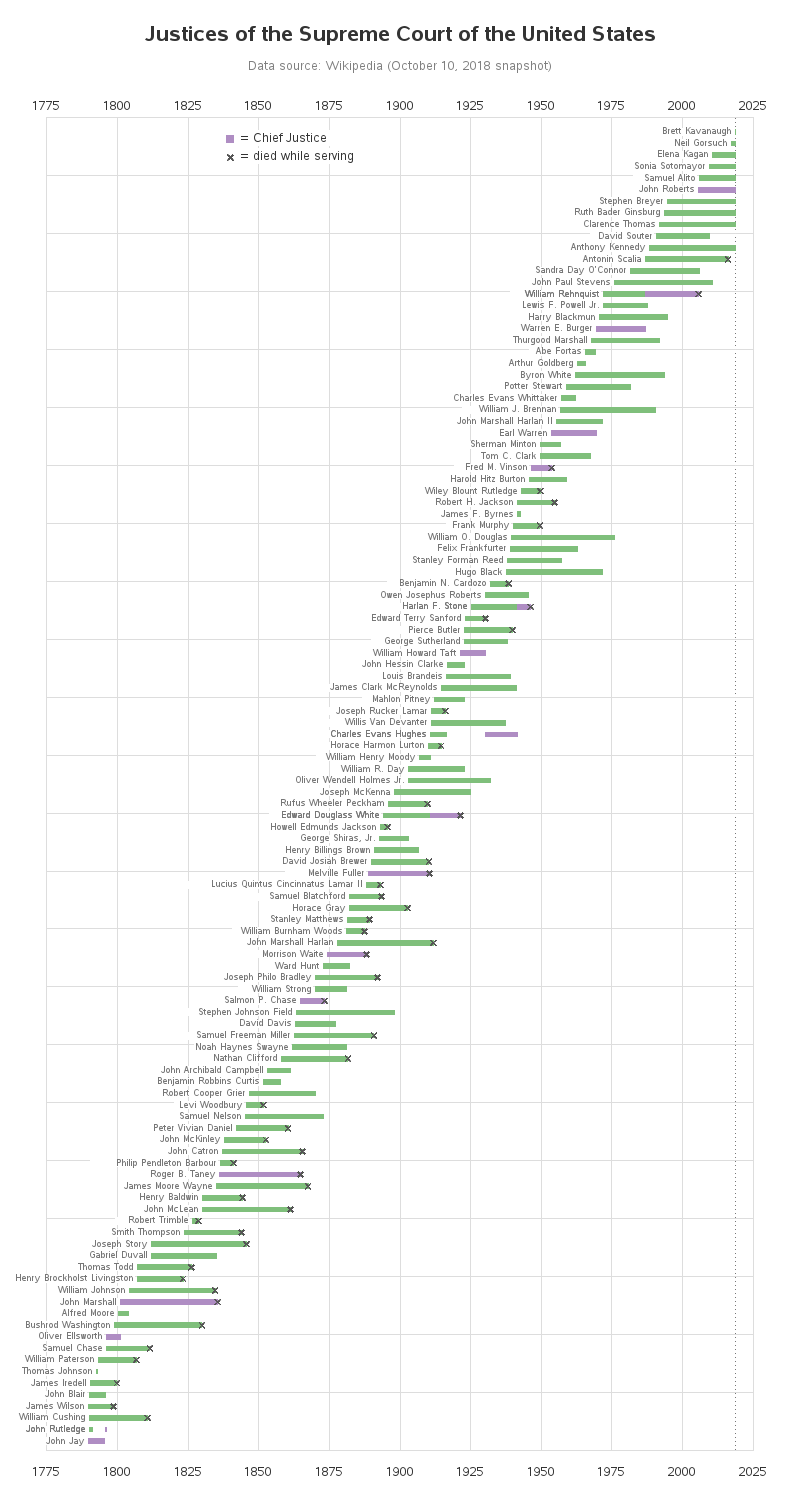 Here's an example of the details I included in my mouse-over text: 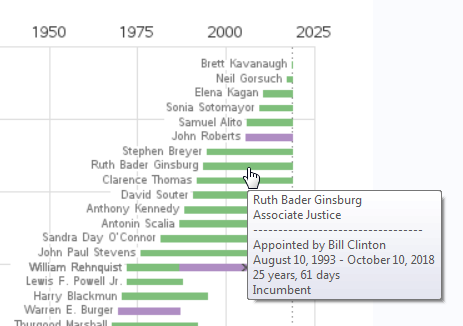 And for the programmers out there who might be curious how I created my custom graph ... I started with a scatter plot, and suppressed most of the things on the axes, and even suppressed the plot markers. I used the annotate bar function to draw a colored bar for each justice, and then the annotate label function to place the justice's name to the left of the bar. I used the annotate html variable to encode some HTML tags for the mouse-over text and drilldown (click the justice bars or names to launch a Google search). I annotated an 'x' at the end of the bars where the justice died while serving. And with the graph being so tall, I didn't want to user to have to scroll to the bottom to see the years - therefore I annotated the years along the top of the graph also. That's a lot of custom 'annotate' code ... but it's all data-driven. Here's a link to the full SAS code.

Now that you've got a simpler SCOTUS timeline graph, do you see anything interesting in this data? Feel free to discuss in the comments!