Of course you know how to create graphs ... But do you often find that preparing the data to plot is often the hardest part? Well then, this blog post is for you! I'll be demonstrating how to import Excel data into SAS, transpose the data, use what were formerly column headers as data values, and then summarize the data to plot.

Here's a hint about the data I'll be using. This is a picture of my friend Becky's daughter in her graduation cap & gown (thanks Becky!). Now can you guess what data I'll be using in my example? Yep - data about student loan debt! 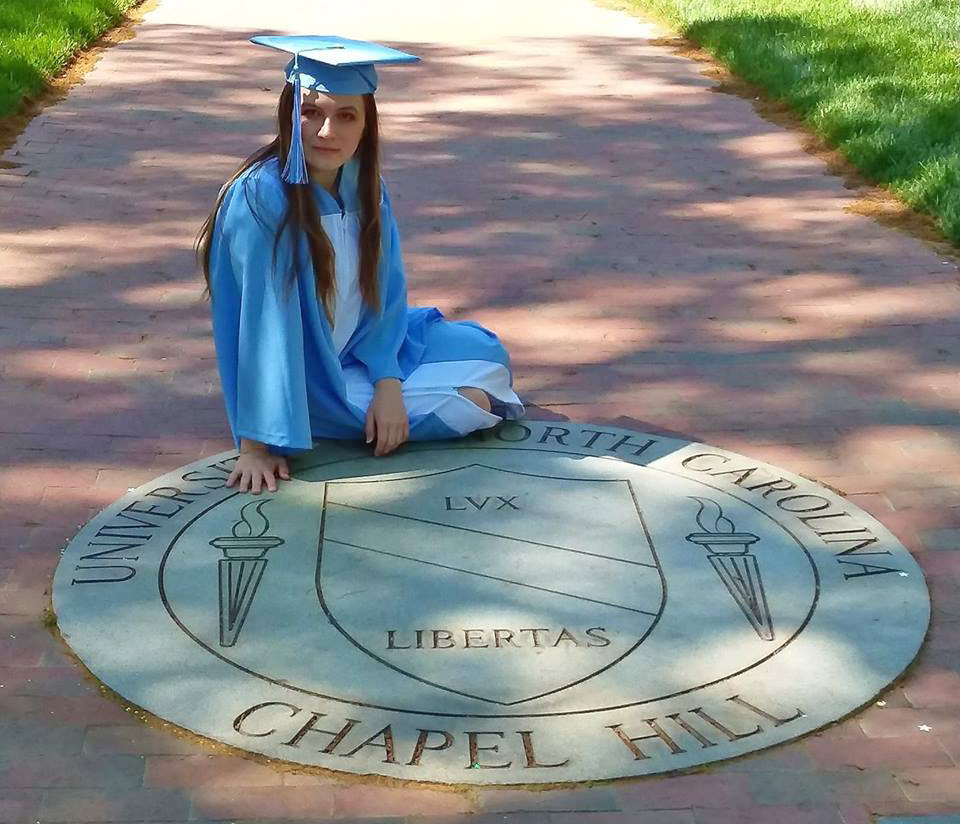 A few years ago, the increasing amount of student loan debt was a big topic in the news. Here's an example of an old article on that topic, and a graph from the article: 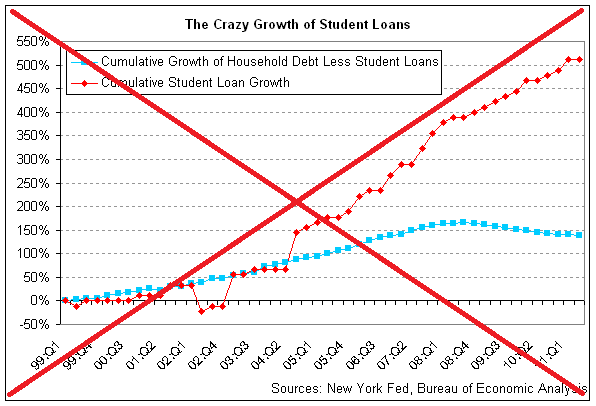 I did a little digging, and found the data on the newyorkfed.org website. I downloaded the Excel spreadsheet, and found the information I was looking for on the "Page 3 Data" tab (this was actually the updated data, 2003-present). Here's a screen-capture of the spreadsheet in Excel: 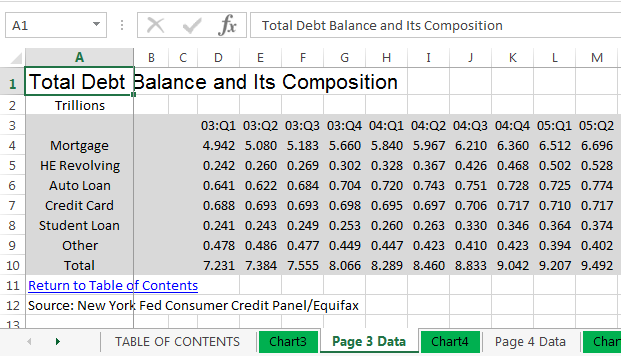 I used the following code to import it into SAS:

And here's what the SAS dataset looks like, very similar to the way it was in the spreadsheet:

Although we've got the data in SAS, we can't really graph it like this. That's because the date (year & quarter) is encoded as part of the variable name, rather than as a value of a variable. That might be an efficient (normalized) way to store the data, but it doesn't lend itself to programmatically analyzing or graphing the data.

SAS allows you to work-around that problem by transposing the dataset. In the code below, first I clean up the variable names a little, and then I transpose the dataset (making the variable names become values). After transposing, there are 366 lines of data (instead of the original 6), with lots of repetition ... not as efficient for storing the data in the minimum amount of space, but much easier to use for analyzing and plotting. Here's the code, and a portion of the resulting dataset. Notice the values that were previously the variable names & labels in the SAS dataset are now values (see circled in red):

Now that we've got the yy:qq as values where we can programmatically work with them, let's turn them into real date values. The following code parses out the year and quarter, and then uses those values to create a SAS date value in the approximate middle of the quarter:

And now we can create a plot of the student loan debt over time, using simple code like the following: 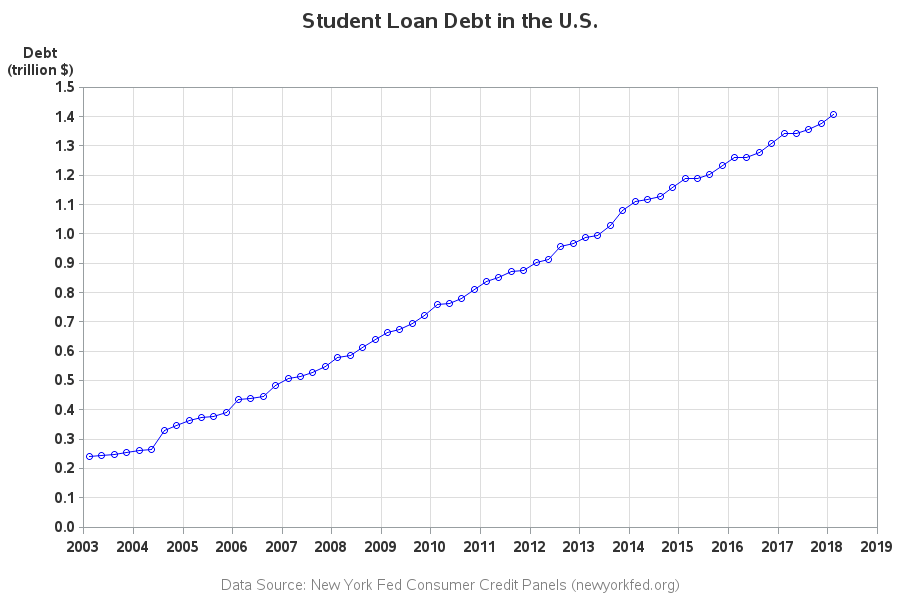 It's a decent plot, but we're still not done. Rather than showing the debt each quarter, we want to show the % increase (or decrease) compared to the first year in the graph (2003). To do that, we'll need to do some data summarization. First I'll create two custom categories - one for Student Loans, and one for all the Other types of debt.

I then summarize the data by those two categories, and save the 2003 summarized values into macro variables (called student and other):

select debt into :student
from summarized_data where my_category='Student Loan'
and year=2003 and qtr=1;

select debt into :other
from summarized_data where my_category='Other'
and year=2003 and qtr=1;

And finally I calculate the % increase (or decrease) of each quarterly value, compared to the 2003 value I've stored in the macro variable).

I'm now able to create my new/improved version of the original graph. Here's a link to my complete SAS code if you want to see all the nitty-gritty details, and below is the resulting graph: 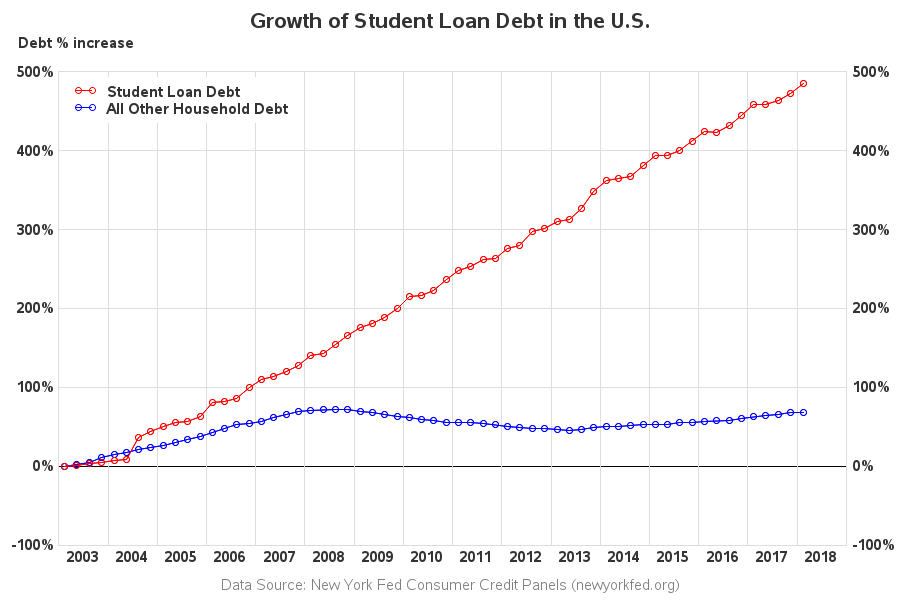 Here is a list of my changes and improvements:

Hopefully you've learned a few tricks to get data out of a spreadsheet, and into a form that is easier to analyze and plot. If you frequently work with data, I guarantee these tricks will be worth learning!

And now back to that graph - were you surprised to see student loan debt increasing so much more than all the other debt? What do you think is causing the increase? (feel free to discuss in the comments)