Have you ever lied about your age? When you were younger, perhaps you exaggerated your age to watch an R-rated movie, buy cigarettes, get into a night club, or drink alcohol? And when people reach their 30s or 40s, they might subtract a few years when people ask their age. And maybe people in their 50s add a few years again, to get a senior citizen discount. When you reach 100, will you add or subtract years? In the data we'll be plotting, these supercentenarians (aged 110+) have purportedly exaggerated their age - some by as many as 50 years!

But before we get started, here's a picture to get you in the mood for age-misrepresentation. This is my good buddy Kurt, playing Hades in the production House of the Fury with Sonorous Road Theatre and Film Studio. He's just a tad bit older than me, but in this picture he could pass for 150 ... or maybe even 5,000, eh! ;-) 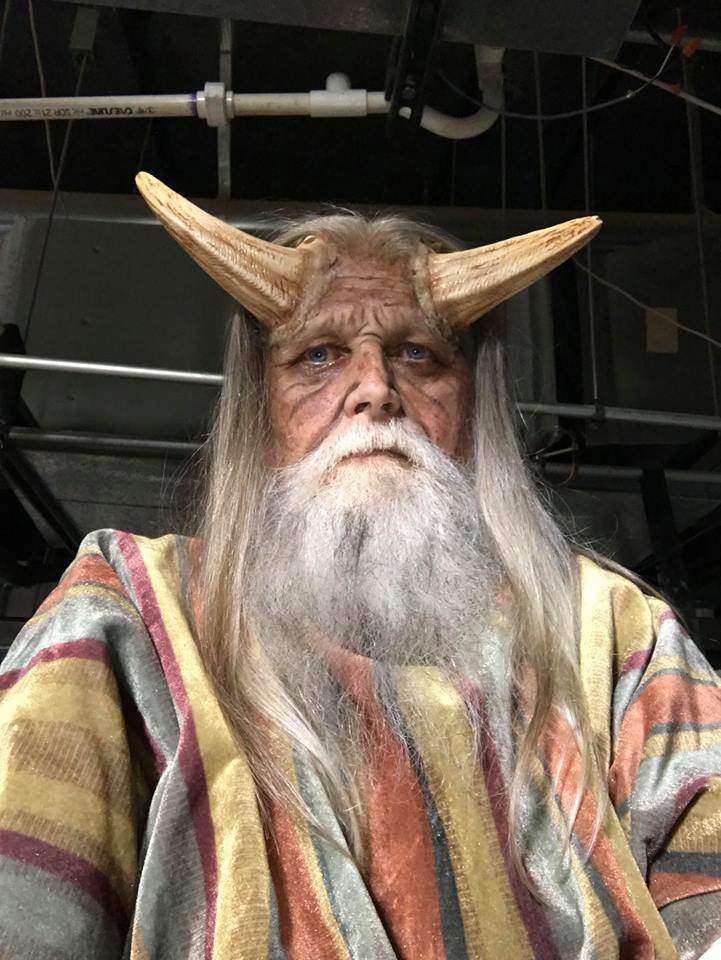 And now, let's see which supercentenarian age claims have been disputed. While doing Google searches to research my previous blog post on the timeline of oldest people in the world, I came across an interesting page of data on the Gerontology Research Group's website. It listed "False and Exaggerated Claims" of supercentenarians. Here's a screen-capture showing some of the data:

It was very interesting data, but it was a bit difficult to digest in table form. So I copy-n-pasted it into an Excel spreadsheet, imported it into SAS, and tried a few graphs. I noticed that a lot of the people were born in the U.S. - so I thought it might be interesting to create a U.S. map showing the number of instances of people with disputed age claims who were born in each state. 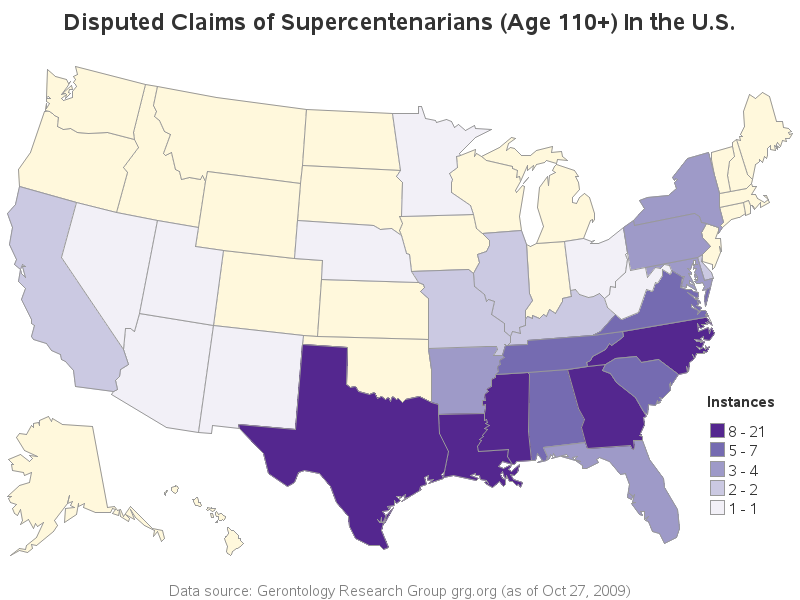 The map immediately brought to light that most of these disputed claims were from people born in the southern states. Hmm - is this proof that more Southerners lie about their age? Perhaps. But note that here in the south, we prefer the term tall tales rather than lies. If you've ever heard a Southerner's fishing stories, you'll know what I'm talking about! ;-)

With the quintile map binning (5 legend colors, with approximately 1/5 of the states in each color bin), there were several states showing the darkest color, and I couldn't tell which state had the highest value. Therefore I added mouse-over text so I could see the exact values, and by mousing-over the darkest purple states I determined that Georgia had the highest number (21 people). Click the map above to see the interactive version with mouse-over text. While I was at it, I got a little tricky and appended all the names together for each state, and added that list to the mouse-over text. Here's a screen-capture: 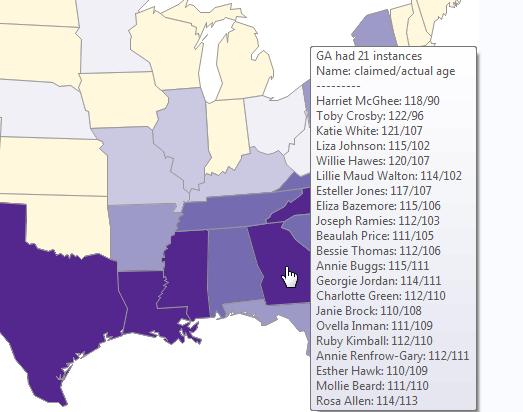 I show the claimed age and the actual age in the mouse-over text, but there's quite a bit of additional information available in the data. Therefore I decided to add a table to my page, but make it a little easier to navigate than the original one. I sorted my table by state, and then set up drilldown links in my map so you can click a state to jump to that state's section of the table (via an HTML anchor). When creating the table with Proc Print, I used 'by statecode' in conjunction with the newly-added ods html anchor="#BYVAL"; feature. Here's an example showing what a state table looks like:

If you like this topic, and want to see some of my other age-related blog posts, here's a link!