If you're into 1980s pop music, then I bet you love Billy Joel's song We Didn't Start the Fire. But do you know every word, and the significance of every reference? Let's use SAS software to create an interactive visualization that will help you fully understand this song!

I first saw an infographic visualization about this song on Rachel Lee's design page. It was visually captivating, and the layout reminded me of a couple of my favorite 1980s arcade games (Tempest and Gyrus), or maybe a concentric version of Tetris - how could I not be drawn in?!? ... 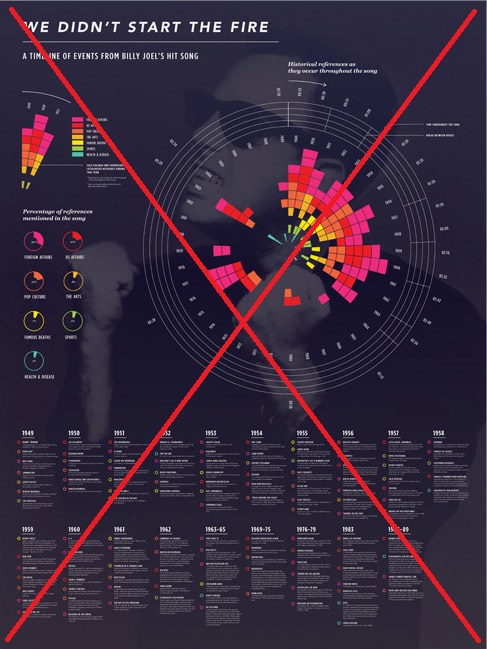 In Billy Joel's song, he mentions things in chronological order, and the infographic mirrors that (starting with 1949 at the top, with spokes proceeding 1 year at a time clockwise), with each colored box representing a different thing mentioned in the song. But the placement of the boxes along the rings (outer to inner) seems a bit arbitrary - they're arranged in the order of the color legend (from outer to inner). This makes for a pretty 'rainbow effect', but isn't really useful for analytics.

You can look at the year labels around the outer edge of the circle, and then find that year at the bottom of the page to see the list of things mentioned in the song from that year. You can then match up the colored circles beside the text, and try to guess which colored box in the graph it corresponds to (but it's difficult to know for sure).

This infographic was so visually captivating that I really wanted it to work, but it just didn't help me understand the song. I spent a lot of time zooming and panning, trying to relate the text at the bottom to the graphic at the top, but it was more cumbersome than rewarding. I even read a page that shows the 8 preliminary versions leading up to the final infographic, but that still didn't help. It was just more of an artistic infographic than an analytic tool.

So, as often happens, I decided to create my own version, and try to make some improvements.

[Click the image below to see the interactive version, with mouse-over text!] 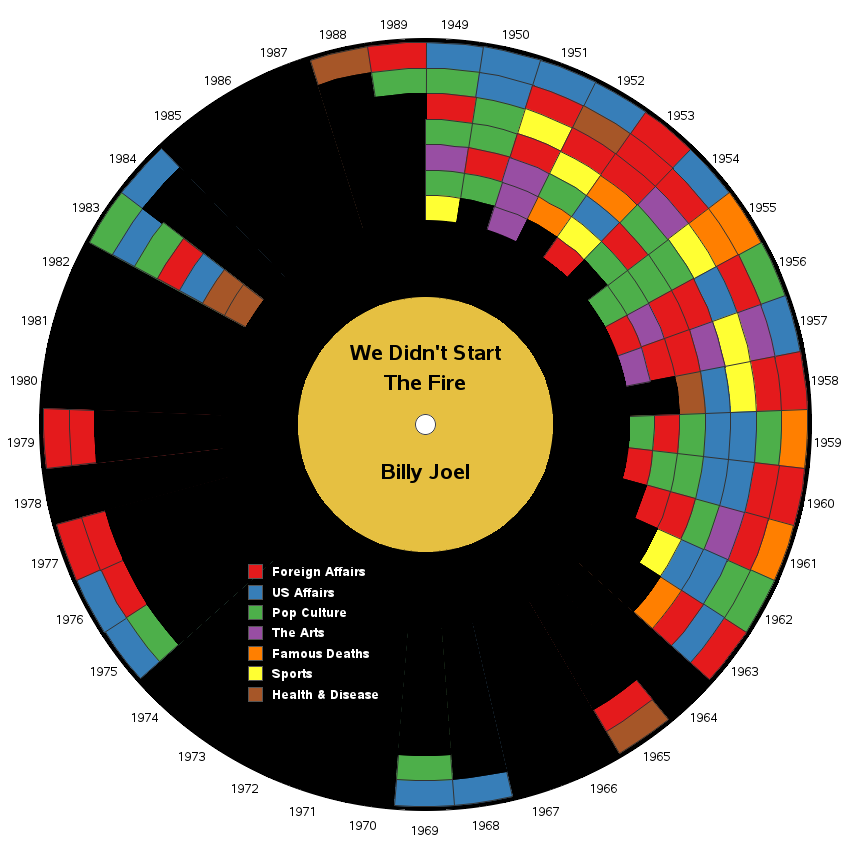 I invite you to view my full size infographic and simultaneously listen to the song, and mouse over the colored boxes (can you keep up?!?). After that, go back and study it in more detail, reading the mouse-over text for the things you need more info on (and if you're really interested in a certain item, click the colored box to launch the Google search).

I hope you enjoyed this infographic as much as I enjoyed creating it! Feel free to leave feedback and suggestions in the comments.