This blog is co-authored by Susan J. Slaughter and Lora D. Delwiche.

SAS Press is now 25 years old. As impressive as that is, a bigger milestone for us personally is that The Little SAS® Book is now 20 years old! We had no idea back then that we would still be writing SAS books all these years later.

We first heard about the Books by Users program (now SAS Press) in 1992. At that time, the typical SAS programmer had a shelf full of fat SAS manuals. The SAS Language: Reference manual, for example, was nearly 2 inches thick and weighed four pounds!  We decided to call our book The Little SAS® Book as a joke since, at the time, the term “little SAS book” was an oxymoron. 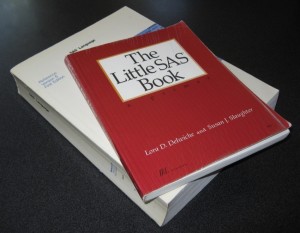 We had each worked at help desks and had seen where beginners get stuck, and we quickly discovered a shared vision for the book. We wanted the book to be small and friendly, cover each topic in just two facing pages, contain programs that are complete and executable, use graphics to illustrate the topics, cover debugging, and avoid jargon as much as possible. As an ironic, literary touch, we also decided to put quotations at the beginning of each chapter.

Settling on the concept for the book was the easy part; writing it took much longer. It took a year just to write the proposal. At the time, we each had small children.  So writing a proposal for a book that might or might not ever be published was a low priority. Somehow we found the time and even hired an artist to mockup some illustrations for us. Then we mailed off the proposal (everything went by US mail back in those days) and got back to our lives.What you didn't know about The Little SAS Book. #SASbooks Click To Tweet

After several months we were delighted to hear that, despite some negative reviews, our proposal had been accepted. To coordinate our writing, we created a detailed outline on index cards which we then sorted into chapters. This is a lot harder than it sounds. We spent a lot of time arranging and rearranging those cards!  Here is a photo of our outline: 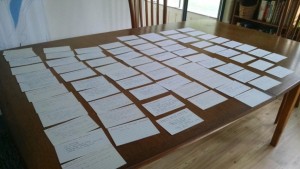 Looking back at the first edition, the most striking thing is how different it is from later editions. In 1995 there was no Output Delivery System, no PROC IMPORT, no Viewtable window, and no syntax sensitive editor. The default output was text, and variable names were limited to 8 characters in length. SAS has evolved a lot, and The Little SAS® Book has evolved with it. 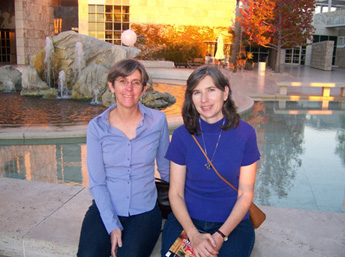