Innovation is easy. All you need to do is three things. 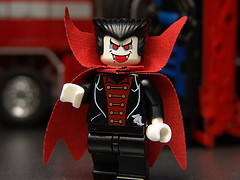 First, have a great idea.

Next, make it happen. And, once that’s done, just make sure you work out how to commercialise it somehow.

Innovation’s never simple, even at the best of times. Moving from the big idea to making it happen is full of those horribly detailed problems that need solving, even if they’re not always obvious. Out of everything that doesn’t happen but should, there’s one thing that sucks the life out of ingenuity more than anything else.

Before you can innovate, you first need to work out what the heck it is you’re trying to do. Making things better only happens when everyone first agrees what “better” means.

Seems goofy, right? Left alone though, it’ll eat the core out of your ability to innovate. Like their namesake, innovation vampires slowly drain the life out of your business. They absorb creativity, cloud your mind, and if left long enough, eventually kill you.

They’re also extremely good at hiding in plain sight. Even though they’re easy to see if you decide to look for them, you first need to recognise you might have an even bigger problem than you originally thought. It might not be your ability to be creative. It might just be that your problems are starting a little closer to home.

When people can’t agree on what’s important, you prevent innovation. When people can’t hold the course, you prevent commercialisation. Without both of these, you stagnate. The worst thing is that you’ll only find these problems if you actively look for them. We’re dangerously good at self-delusion. Think on this - what’s the gap between your organisation’s:

Talk is cheap. Change is hard. Facing this beast head-on isn’t fun - it takes some serious self-reflection and often ends in disruption from the top down. It’s also not an easy fix; it starts and ends with culture.

But, I’m sure you already know all this. And, everything’s under control, right? So, for everyone who thinks that they don’t have any problems with an innovative vampire, here’s one last test. Seeing as you’re reading this, it’s a fair assumption that you’re probably fairly familiar with using data to make better decisions. In fact, you’re probably a big champion for data-driven decision-making.

Now, ask yourself this: every day, how many of your decisions are based on data rather than what’s in your gut? Do you walk the path you promote? Or, do you unconsciously show the behaviours that you’re trying to eliminate?

Culture starts with you. It’s a small thing, but it’s the small things that eventually have a big impact.

Evan Stubbs is the Chief Analytics Officer for SAS Australia. He is the author of The Value of Business Analytics and Delivering Business Analytics, sits on the board member of Institute of Analytical Professionals of Australia, and is a guest lecturer at Macquarie University and the University of Sydney. He is a recognized expert in innovation and leads the Advisory business within SAS Australia, a group focused on transforming organisations into analytical competitors. His practical and experience-based talks on creating value through the use of business analytics are in high demand and feature regularly as keynote presentations.