Graphing a normal curve without any shading is straightforward. To begin with, we create a data set containing the values for the x-axis, the values of the standard normal pdf, and a final variable set to zero.

We next plot our data set using SGPLOT. 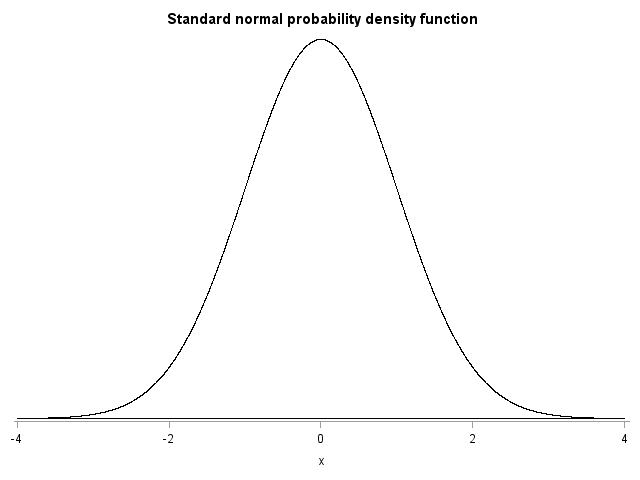 The variable LOWER, which was set to 0, was included to show that the PDF values asymptote at zero for high or low values of X. This is not essential to the plot, but it adds a little extra clarity. I also changed a few other plot options (i.e., removing the legend, removing the border, removing the y-axis, and specifying the colors for the lines) to simplify the appearance of the plot.

Adding shading to a normal PDF plot requires a few extra steps. SGPLOT does not allow us to directly specify a shape to be shaded, but it does allow for shading between two lines, or bands, using the BAND statement. For example, we can create a standard normal PDF by adding a band between 0 and the PDF values: 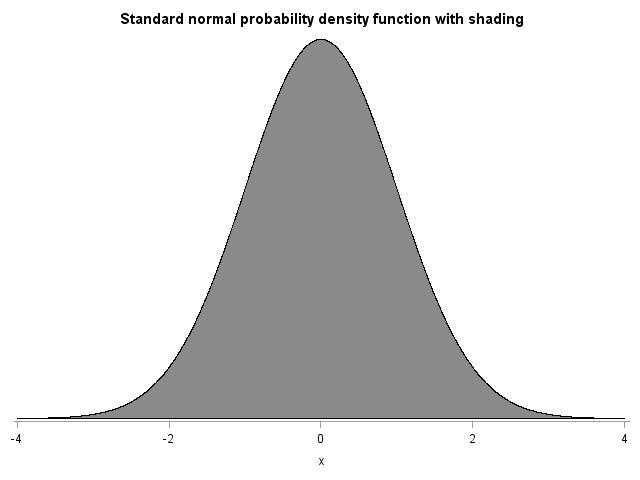 We are not usually interested in shading the entire area under the curve, however. Instead, we are more likely to want to shade an area that is below or above some cutoff. For example, I previously mentioned that 95% of a standard normal curve falls below a value of 1.645. To demonstrate this, we can shade the area of a standard normal curve that falls below the cutoff of 1.645. Unfortunately, we cannot simply tell SGPLOT to only display the band below a particular value of X. Instead, for values of X that should not be shaded we can set the size of the band to zero, producing a line rather than a band. To do this, we add a new variable, UPPER, to the data set. Upper is equal to the standard normal PDF for values of X that we wish to be shaded, and zero otherwise.
For example:

We now redo our previous plot, but specify that the band fall between the variables LOWER and UPPER (instead of between LOWER and PDF, which we specified previously). 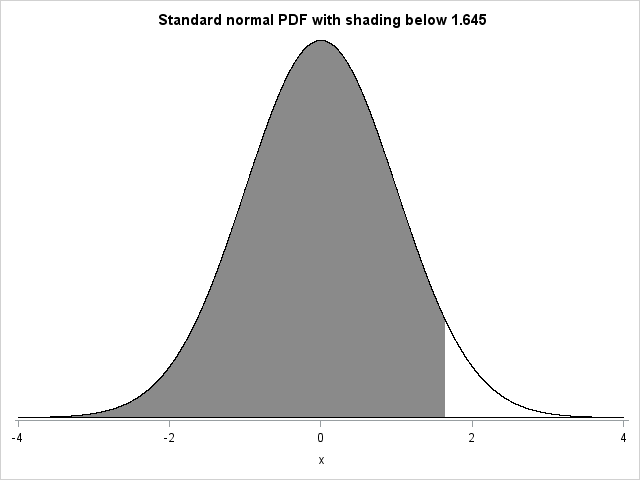 If we want to instead plot the area above 1.645, we rewrite the DATA step as follows:

Notice that we changed the inequality used in the IF statement from <= to >. Re-running the same SGPLOT syntax that we used earlier produces the following plot: 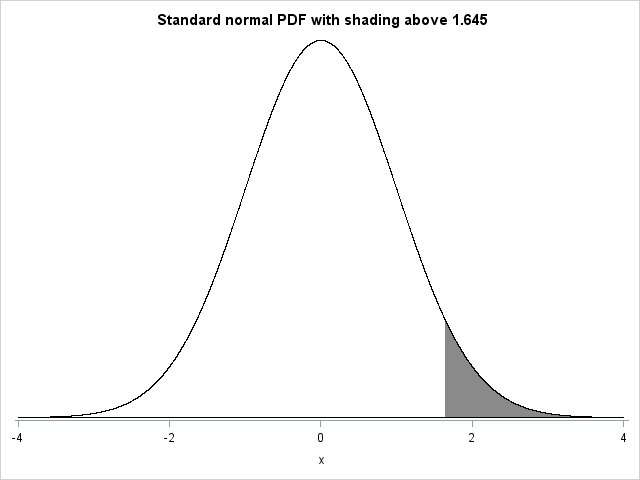 We can adjust the syntax to create more complex figures as well. To make these graphs easier to create (and to keep the syntax concise), I created a macro called NORMALPDF. The macro generates the DATA step and SGPLOT syntax necessary for creating these graphs. For example, we might want to create a plot of a standard normal PDF with shading between -1.96 and 1.96. These cutoffs correspond to a two-sided Z-test with alpha=.05. As such, 95% of the distribution falls between -1.96 and 1.96. We might further want to add vertical reference lines with labels at the two cutoff values. The macro call would be as follows:

The macro parameters LOWER_CUTOFF1 and UPPER_CUTOFF1 reflect that we are shading an area that is truncated on both its lower and upper ends. This syntax produces the following plot: 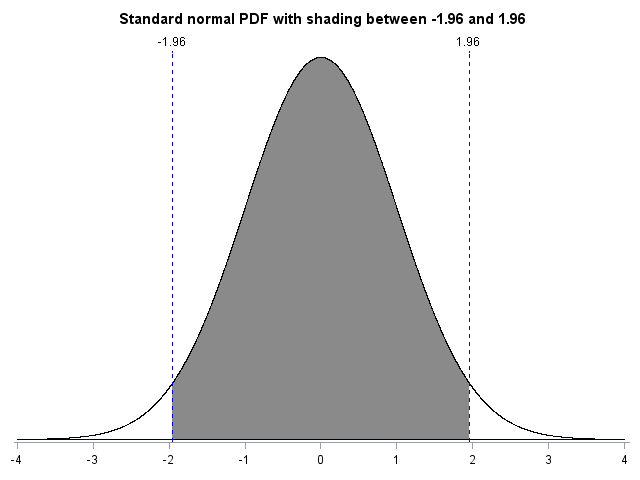 Notice that different parameters were used for the previous macro call. Rather than employing LOWER_CUTOFF1 and UPPER_CUTOFF1, I specified UPPER_CUTOFF1 and LOWER_CUTOFF2. This was done to reflect that two separate bands of the distribution were to be shaded. The first band was shaded from -4 (the lowest value on the graph) to -1.96. The second band was shaded from 1.96 to 4 (the highest value on the graph). The following graph would be generated: 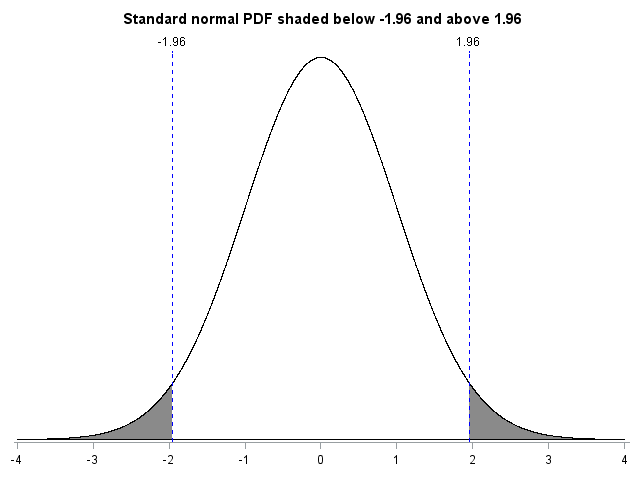 The macro also allows the distribution moments and the x-axis values to be quickly updated. For example, the SAT was traditionally scored to have a mean of 500 and a standard deviation of 100. If a person were to score a 650 on the SAT, we might want to depict the proportion of test-takers falling below that score. To do this, we first change the mean and standard deviation of our distribution to be 500 and 100, respectively. We also need to ensure that the graph shows the appropriate range of values. So, we specify x-axis values ranging from 200 to 800, with a tick mark at every multiple of 100. Finally, we add a cutoff at 650 with a corresponding label. The syntax and resulting graph are below. 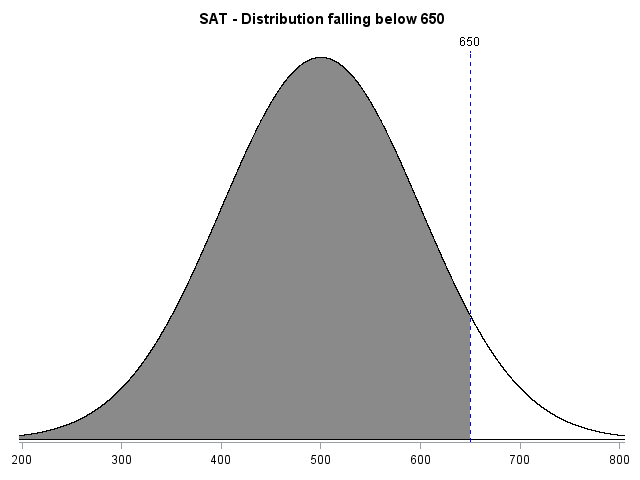 %macro normalpdf(mu = 0, [the mean of the distribution]

sd = 1, [the standard deviation of the distribution]

lower_cutoff1 = none, [the lower cutoff of the first shaded distribution]

upper_cutoff1 = none, [the upper cutoff of the first shaded distribution]

lower_cutoff2 = none, [the lower cutoff of the second shaded distribution]

upper_cutoff2 = none, [the upper cutoff of the second shaded distribution]

meanline = no, [requests a reference line at the mean]

refline1=none, [specifies the location of an optional reference line]

reflabel1=, [specifies the label of an optional reference line]

refline2=none, [specifies the location of an optional reference line]

reflabel2= [specifies the label of an optional reference line]

Stephen Mistler is an analytical training consultant at SAS. He teaches multiple SAS courses, including: Determining Power and Sample Size using SAS/STAT Software, Introduction to Programming with SAS/IML Software, Multilevel Modeling of Hierarchical and Longitudinal Data, and Structural Equation Modeling using SAS. His educational background is in quantitative psychology and he is currently working on his dissertation, which focuses on the use of multiple imputation for multilevel data. Stephen was named a SAS Student Ambassador Honorable Mention for papers that he presented at SAS Global Forum. He also received a SAS Summer Fellowship in Statistical Software Development.