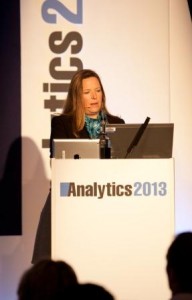 Last week I awoke to an email saying that a respected friend and colleague in Belgium had had an injury and was not well enough to give his talks at the Analytics conference in London. "Can you hop a plane out here and cover six talks?"

A trip to London? On someone else's nickel (er, tuppence)? How could I say no?

I arrived in time to see a few talks by other presenters, which were fantastic. Two of the keynotes hit on interesting topics: innovation and communication in analytics.

Our own Andreas Diggleman discussed the implementation of an Analytics Lab within an organization. SAS has a lab in the US with a new one underway in Europe, and they put out some really amazing and innovative projects. But most importantly, as Diggleman said, they operate under a policy that many, many ideas are tried, and most do not see the light of day. These two characteristics: openness to "failure" (which is really a way of saying "ideas that aren't as great in practice as they looked on the whiteboard"), and willingness to scrap ideas when they don’t work, breeds innovation. Labs operate in an isolated testing environment, so production jobs are not subjected to innovations that didn’t work out. Some companies I have worked with, who are innovation leaders of their respective industries, have in common this willingness to try ideas (on a small scale) that might not work out. It made me think of Jim Collins’ discussion of shooting bullets before cannonballs (in his book "Great by Choice").

Olympic gold medal rower Greg Searle delivered a keynote on taking an analytical approach to team training to improve performance. He had lots of fantastic advice (get data! then get better data! experiment with the equipment and strategies!) but what hit home with me was the critical importance of having the full engagement and communication of all the stakeholders. In his case, this was teammates, coaches, and support staff. Where communication broke down, so did the team's performance. Where communication was strongest, so was the team. The same can be true for analytical teams in business. Top management, analysts, regulatory experts, and the implementation team should be involved at every stage, and communication should be clear and transparent. Senior managers are great champions for projects where they have personally invested time and energy.  Furthermore, every project should be a learning opportunity, and the successes, failures, and lessons learned are communicated to others. This fosters continuous improvement and prevents the same square wheel being reinvented year after year.

Before I arrived in London, delegates from around the world attended the pre-conference training to gain in-depth knowledge of how to put their analytical skills to work with SAS technologies. I heard especially great accolades for Chris Daman’s offering of Multilevel Modeling of Hierarchical and Longitudinal Data Using SAS.

The speakers and the training were not the only reasons that the conference was such a success. 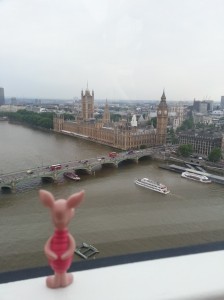 Over 600 attendees, who came from all over the world and from dozens of industries, gathered in the spirit of mutual learning and growth. Everyone left having made connections with peers in data science, analytics, and data mining to enrich all of our professional lives. I am grateful to those who came to my presentations and hope that they learned something useful as well! I also hope to see some of those new connections again this October in Orlando! Or, perhaps next year in Europe!

So although the trip was hastily planned, and it was very brief, it was definitely worth the jet lag. And, being something of a party animal, I did get out and see the sights with my favorite Very Small pig.


Catherine Truxillo, Ph.D. has been a Statistical Training Specialist at SAS since 2000 and has written or co-written SAS training courses for advanced statistical methods including: multivariate statistics, linear and generalized linear mixed models, multilevel models, structural equation models, imputation methods for missing data, statistical process control, design and analysis of experiments, and cluster analysis. Although she primarily works with advanced statistics topics, she also teaches SAS courses using SAS/IML (the interactive matrix language), SAS Enterprise Guide, SAS Enterprise Miner, SAS Forecast Studio, and JMP software. Before coming to SAS, Catherine completed her Ph.D. in Social Psychology with an emphasis in Statistics at The University of Texas at Austin. While at UT Austin, she completed an internship with the Math and Computer Science department's statistical consulting help desk and taught a number of undergraduate courses. While teaching and performing her own graduate research, she worked for a software usability design company conducting experiments to assess the ease-of-use of various software interfaces and website designs. Cat's personal interests include triathlon, hiking the woods near her home in North Carolina, and having tea parties with her two children.