Since we added the new "Recommended by SAS" widget in the SAS Support Communities, I often find myself diverted to topics that I probably would not have found otherwise. This is how I landed on this question and solution from 2011 -- "How to convert 5ft. 4in. (Char) into inches (Num)". While the question was deftly answered by my friend (and SAS partner) Jan K. from the Netherlands, the topic inspired me to take it a step further here.

Jan began his response by throwing a little shade on the USA:

Short of moving to a country that has a decent metric system in place, I suggest using a regular expression.

On behalf of my nation I just want say that, for the record, we tried. But we did not get very far with our metrication, so we are stuck with the imperial system for most non-scientific endeavors.

Matching patterns with a regular expression

Regular expressions are a powerful method for finding specific patterns in text. The syntax of regular expressions can be a challenge for those getting started, but once you've solved a few pattern-recognition problems by using them, you'll never go back to your old methods.

Beginning with the solution offered by Jan, I extended this program to read in a "ft. in." measurement, convert to the component number values, express the total value in inches, and then convert the measurement to centimeters. I know that even with my changes, we can think of patterns that might not be matched. But allow me to describe the updates:

Here's my program, followed by the result:

Other tools to help with regular expressions

The Internet offers a plethora of online tools to help developers build and test regular expression syntax. Here's a screenshot from RegExr.com, which I used to test some aspects of my program. 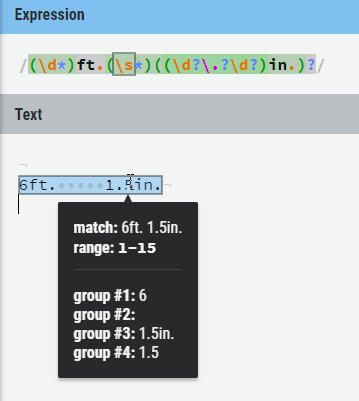 Tools like these provide wonderful insight into the capture groups and regex directives that will influence the pattern matching. They are part tutorial, part workbench for regex crafters at all levels.

Many of these tools also include community contributions for matching common patterns. For example, many of us often need to match/parse data with e-mail addresses, phone numbers, and other tokens as data fields. Sites like RegExr.com include the syntax for many of these common patterns that you can copy and use in your SAS programs.