I know what you're thinking: two "Boaty McBoatface" articles within two weeks? And we're past April Fool's Day?

But since I posted my original analysis about the "Name our ship" phenomenon that's happening in the UK right now, a new contender has appeared: Poppy-Mai.

The cause of Poppy-Mai, a critically ill infant who has captured the imagination of many British citizens (and indeed, of the world), has made a very large dent in the lead that Boaty McBoatface holds. 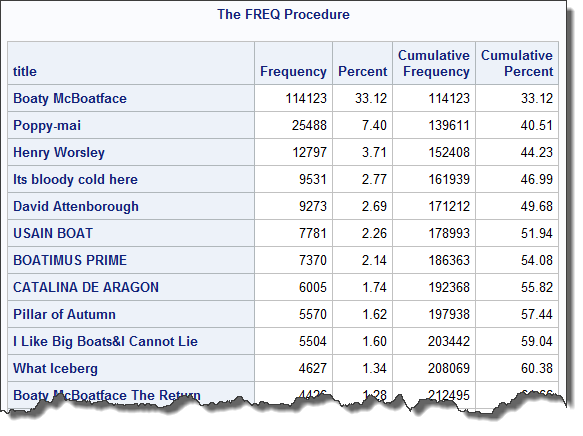 Yes, "Boaty" still has a-better-than 4:1 lead. But that's a lot closer than the 10:1 lead (over "Henry Worsley") from just over a week ago. Check out the box plot now: you can actually make out a few more dots. Voting is open for another 10 days -- and as we have seen, a lot can happen in that time.

As I take this second look at the submissions (now almost 6300) and voting data (almost 350,000 votes cast), I've found a few more entries that made me chuckle. Some of them struck me by their word play, and others cater to my nerdy sensibilities. Here they are (capitalization retained):

While I'm on this topic, I want to give a shout-out to regex101, the online regular expression tester. I was able to develop and test my regular expressions before dropping them into a PRXPARSE function call. I found that I had to adjust my regular expression to cast a wider net for valid titles from the names submissions data. Previously, I wasn't capturing all of the punctuation. While that's probably because I didn't expect punctuation to be part of a ship's name, that assumption doesn't stop people from suggesting and voting on such names. My new regex match:

I could probably optimize by specifying an exception pattern instead of an inclusion pattern...but this isn't the sort of project where I worry about that.

Will I write about Boaty McBoatface again? What will my next Boaty article reveal? Stay tuned!