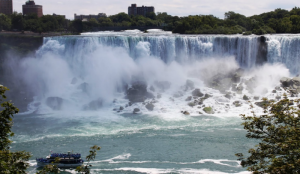 American side seen from Canada in 2013

When he filmed the scene in the summer of '69, my Dad did not foresee his moment of fame in 2016. But in the last two days, Dad has seen his 47-year-old work appear in the local Buffalo, NY media, on DailyMail.com, and on FOX News*.

In August of 1969, on a family outing to Niagara Falls, Dad filmed a remarkable scene. It was during the time that engineers had "turned off" the American side of the Falls**, diverting most of the water to the Canadian side, while scientists studied the natural wonder for erosion patterns. Did you know that it was possible to turn off the mighty Niagara Falls? Yes, it's been done. And there is renewed interest in the event because Niagara Falls authorities are talking about doing it again.

It might be generous to call the video "viral." By most definitions, a video can be called "viral" if it receives a million views in a day, or 3 to 5 million views in a few days. This video (on my personal YouTube channel) has received only about 40,000 views in the past day. Not viral, but let's call it "burgeoning" (thank you Roget's). (UPDATE: one week later, the video now has over 100,000 views!)

Here's the historical timeline of this video:

That last point was probably crucial. In all three cases (Buffalo News, Daily Mail, and FOX News), the stories were produced within hours of the reporters reaching out to me. The stories were happening with or without my video. Like so many events in my life, this was all about being in the right place at the right time.

This blog topic is a departure from my usual discussion of SAS topics, so let's tie it back with a view of some YouTube stats. YouTube provides video analytics to any user with a YouTube channel, but the stats usually lag by several days. It's too soon to see the aggregated view of my stats that include the past two days. But, YouTube does offer a "real time" view of what is happening with your video right now. Here's my snapshot from this morning:

If you watch the video in the next few days you'll be subjected to some advertising. That's how YouTube generates revenue from popular content. Thanks to my use of copyrighted music, I don't really have a chance to benefit financially from this sudden burst of activity. But that's okay with me -- I enjoy just watching the phenomenon to see how far it goes.

* FOX News reporters reached out to me yesterday and said the story would air yesterday afternoon. I haven't seen it, but my Dad confirmed they aired the video and gave him the photo credit.


** The idea of "turning off the Falls" sounds crazy to some, but really it's an impressive feat of engineering that was mastered decades ago. People are not generally aware that much of the "Falls" volume is diverted every day right now to provide hydroelectric power to the Northeast. Remember Y2K? When people were worried that the power grid might shut down when the year turned to 2000, one certainty remained: water would continue to flow over the Falls. The Niagara Falls hydro plant played a critical role in disaster preparations for Y2K. Of course, nothing came of it – Y2K was a big disappointment in that respect.