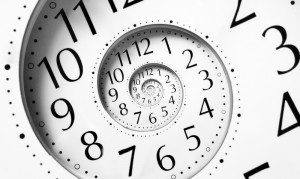 I watched with wonder as each of my daughters learned how to "tell time." Early in their primary school careers, they brought home worksheets that featured clock faces with big-hand/little-hand configurations that they had to decipher, and exercises that asked them to draw the hands as they should appear given a specific elapsed time. Now my daughters have digital watches, and have even adopted my habit of wearing them with the face on the underside of the wrist and setting the display to 24-hour time -- which serves to confound their friends.

But, to my disappointment, their school has failed to teach my daughters how to read a SAS datetime value, or even the more ubiquitous Unix (POSIX) datetime value. As a parent of the 21st century, I feel it is my duty to fill this gap in their education.

First, let's review how these datetime values are represented:

Conversion from Unix to SAS representation is simple math:

Having trouble remembering that 9-digit constant? Then you can get SAS to infer that part for you and use the dhms() function:

Raw Unix times are often expressed as UTC, and you might prefer to show local times in your SAS reporting. That's a simple calculation with the (undocumented) gmtoff() function:

Update: Bruno told me that TZONEOFF is an official SAS function in SAS 9.4! See the comments for more details how you can use it instead of GMTOFF.

I have one more variation that I use every day. I have a project that reports against a database that stores transaction times in milliseconds instead of seconds. (This uses the database's intrinsic int8 or BIGINT type.) SAS datetime values can represent fractions of seconds, so this conversion simply requires that I divide by 1000. I can use a different SAS datetime format to see the precision (if that's what I want, though it's usually not).

Here's a complete program that you can experiment with:

Sample output from this program (which I ran from my EDT timezone):

* I intentionally avoided any discussion of leap seconds that go along with UTC, but you can learn more about that here.