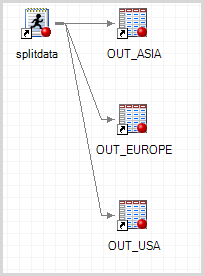 Back in the day when the prison system forced inmates to perform "hard labor", folks would say (of someone in prison): "He's busy making little ones out of big ones." This evokes the cliché image of inmates who are chained together, forced to swing a chisel to break large rocks into smaller rocks. (Yes, it seems like a pointless chore. Here's a Johnny Cash/Tony Orlando collaboration that sets it to music.)

SAS programmers are often asked to break large data sets into smaller ones. Conventional wisdom says that this is also a pointless chore, since you can usually achieve what you want (that is, process a certain subset of data) by applying a WHERE= option or FIRSTOBS=/OBS= combination. Splitting a data set creates more files, which occupy more disk space and forces more I/O operations. I/O and disk access is often the most expensive part of your SAS processing, performance-wise.

But if the boss asks for broken-up data sets, you might as well spend the least possible effort on the task. Let's suppose that you need to break up a single data set into many based on the value of one of the data columns. For example, if you need to break SASHELP.CARS into different tables based on the value of Origin, the SAS program would look like:

I'm going to admit right now that this isn't the most efficient or elegant method, but it's something that most beginning SAS programmers could easily come up with.

Writing the above program is easy, especially since there are only 3 different values for Origin and I've memorized their values. But if there are more discrete values for the "split-by" column, the task could involve much more typing and has a high possibility for error. This is when I usually use PROC SQL to generate the code for me.

If you've read my article about implementing BY processing for an entire SAS program, you know that you can use PROC SQL and SELECT INTO to place data values from a data set into a macro variable. For example, consider this simple program:

It creates a macro variable VALLIST that contains the comma-separated list: "Asia,Europe,USA".

But we can use SAS functions to embellish that output, and create additional code statements that weave the data values into SAS program logic. For example, we can use the CAT function to combine the values that we query from the data set with SAS keywords. The results are complete program statements, which can then be referenced/executed in a SAS macro program. I'll share my final program, and then I'll break it down a little bit for you. Here it is:

Here are the highlights from the PROC SQL portion of the program:

"By each value of a variable" is just one criterion that you might use for splitting a data set. I've seen cases where people want to split the data based on other rules, such as:

With a small modification, my example program can be adapted to serve any of these purposes. What about you? Are you ever asked to split up SAS data sets, and if so, based on what criteria? Leave a comment and tell us about it.