Data cardinality is an important topic for for data analysis. In mathematical terms, cardinality is simply the number of elements in a set. But in data applications, cardinality signifies the number of unique values for a given field of data. Related terms include number of levels (thank you, PROC FREQ and NLEVELS), percent unique, as well as discrete data -- data with a finite number of different values. (That's not to be confused with discreet data, which is when you're careful not to share too much personal information. For example, we can count the Kardashians in discrete increments. But that doesn't mean that they behave discreetly.)

Since I've been working with cardinality recently, I've developed this persistent earworm that I just can't shake. I decided to write it down and present it to you. (You're welcome.) 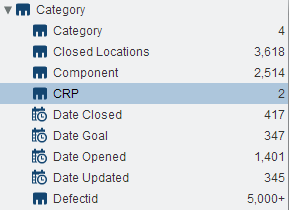 SAS Visual Analytics -- which I've been using for recent projects -- makes a big deal out of cardinality. The displayed list of variables shows the cardinality values front-and-center (see the inset screenshot image). Knowing how many different values a column can take on should influence the type of visualization you design. For example, it might make sense to group a set of charts by GENDER, which typically has a cardinality of 2 (or at most 3, if "unknown" is permitted). However, it would make less sense to group your charts by CUSTOMER_ID when that field has a cardinality in the thousands.

I have a variation of my own, developed mostly by my colleague Hans-Joachim Edert. It produces a report like this: 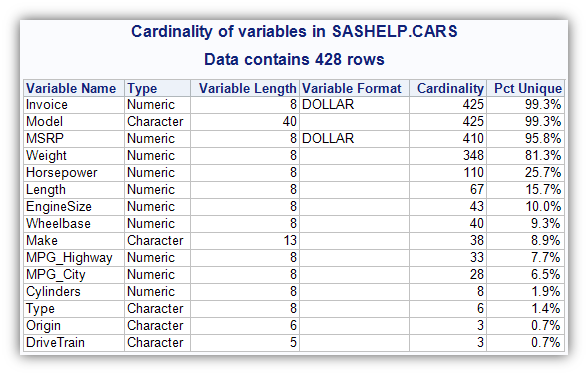 What can you learn from this report? In this example, we can see that Origin (where the model of car comes from) has just 3 possible values, making it less than 1% unique across the 428 records. That might make it a good grouping variable. Model, on the other hand, has a unique value for almost every record. The fact that it's so close to 100% unique might indicate a data quality problem. (Do we expect all Model names to be unique?) And the numeric variable Cylinders has only 8 different values, which might indicate that it's more of a category than a measure. (Would you want to SUM or AVERAGE the Cylinders across these records?)

Here's a link to the program code if you want to try it yourself. Here's a sample call to the macro in the program:

In a future article I'll present a SAS Enterprise Guide custom task that makes the "check cardinality" process easy -- no programming. (Here's a sneak peak.) But you do not have to wait to learn more about your data: you can already glean much of this (and more) by using the Characterize Data task.