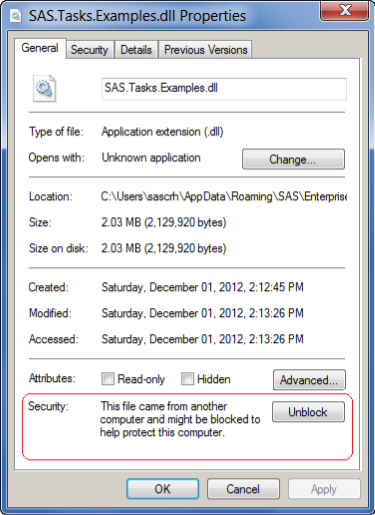 Recent versions of SAS Enterprise Guide (version 5.1 and later) use Microsoft .NET 4.0, which enforces additional security requirements before running custom task DLLs that you download from the Web, including those that you download from support.sas.com. Because these task DLLs are downloaded from the (big and scary) Internet, the Microsoft .NET runtime does not automatically "trust" them as it would trust a properly installed application. To enable the task to run, you must first "unblock" the file using Windows Explorer.

If the DLL is blocked when you try to add it in SAS Enterprise Guide, you might see a message such as the following, and the task will not appear in the Tools->Add-Ins menu:


You can read more about this security feature and behavior in this Microsoft Knowledge Base article. If you build your own custom tasks (for example, by using the example projects and source code), you will not need to unblock the DLLs as you build them.