Question: What do John Travolta, Gina Davis, and I all have in common? (I mean, besides the obvious fact that we are all awesome dancers.)

Answer: We have all had makeup applied by artist Roxie Stice.

I was the host for two SAS Tech Talks, which were broadcast via Livestream on Monday (link) and Tuesday (link) from SAS Global Forum. Even though these might seem like informal technical chats and demos, each one was every bit a professional televised program (at least, from a production standpoint). And I don't care who you are -- you do not go onto television (with its unforgiving studio lights and HD cameras) without makeup. Scott M. gets his beauty treatment

Roxie applied makeup to every person who appeared on camera (via studio or big stage). That includes Joe Theismann, Jim Goodnight, Guy Kawasaki, and me. And dozens of other presenters/hosts/experts. In fact, she got me three times (once for each Tech Talk, and one Live Update to promote the talks and the closing session).

During the webcasts, Roxie sits just off-camera with her makeup satchel (a portable subset of her full makeup station). During a commercial break (yes, we had them), she is ready to pop up and do a bit of touch-up before the broadcast goes back live, usually within 30 seconds.

Roxie is a delightful conversationalist. Especially if you like to talk about your various blemishes and skin oddities, because she notices them all. And she'll point them out -- not in a critical way, but simply as a matter-of-fact. She will professionally cover up any such blemishes, and then provide helpful advice about how you can do the same in your daily life. However, if I actually followed her advice, I'd never get out of the house in the morning. 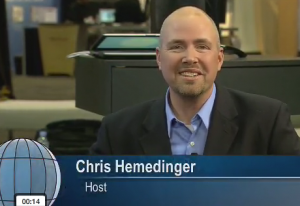 If you ask (and it doesn't take much prompting), Roxie will happily begin listing out all of the other celebs that she applies makeup to. I can only assume that the next time she makes up Gina Davis or John Travolta, she'll start dropping my name to impress them.

As a full-service consultant, she doesn't just apply the makeup; she removes it too. As soon as the broadcast has ended, she's right there with pre-moistened cloths, ready to go to town. If rubbing a bald head truly brings good luck, Roxie is set for life -- between myself, John Brocklebank, Carl Farrell, and few of the other "follically challenged" participants. (Hey, as they say, grass doesn't grow on a busy street...)