At the most recent SAS Global Forum in Las Vegas, I gave a demo on using SAS/OR to compute an optimal strategy for the casino game blackjack. For anyone who wasn't able to attend, I'd like to show some of the code and results here.

In 1975, Manson, Barr, and Goodnight derived an optimal strategy for four-deck blackjack. In this demo, I'll instead use an “infinite-deck” approximation:

The linear programming (LP) solver is used twice in one PROC OPTMODEL call:

You can declare the decision variables, constraints, and dummy objective (specifying an objective is optional in SAS/OR 13.2) in PROC OPTMODEL as follows: 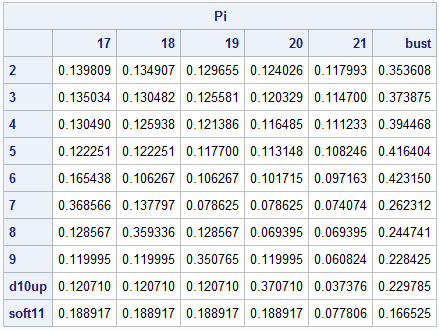 If you stare at these numbers long enough, you start to see some patterns, but the patterns become even more obvious if you instead use PROC SGPLOT to display this table as a heat map in which darker blue corresponds to higher probabilities: 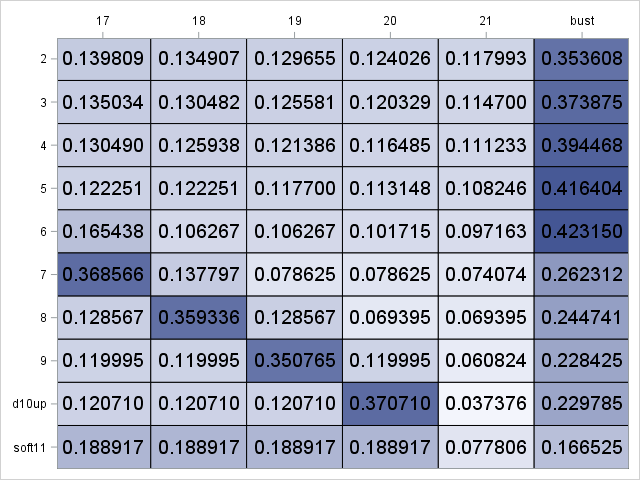 which we can again model by using linear programming (think of \(\) as the least upper bound):

This LP formulation applies to all Markov decision problems with finite state and action spaces, not just blackjack. The corresponding PROC OPTMODEL code is as follows, where the constraints are grouped by action and \(\) indicates if the player is (1) or is not (0) allowed to double down: 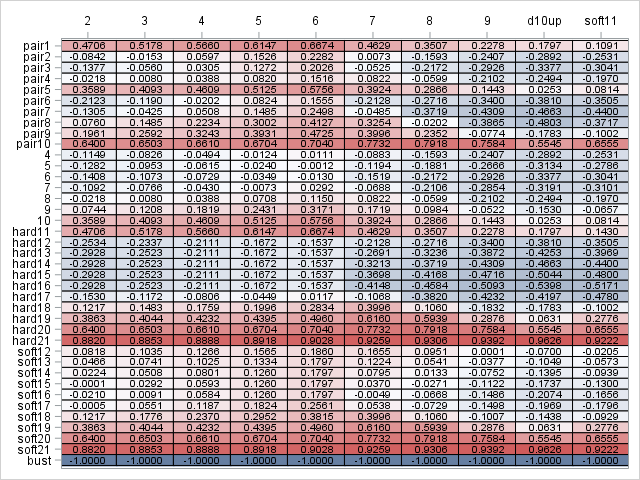 Again, several patterns are evident, but this imposing chart of expected profits defies memorization and is not practical for a player to use at the blackjack table. Instead, what the player really needs to know is the optimal action to take in each state, and this information is captured by the dual variables, whose values are accessible through the .DUAL constraint suffix. Explicitly, a positive dual value indicates that you should take the corresponding action. The following PROC OPTMODEL code prints the optimal strategy:

The optimal strategy for pairs is: 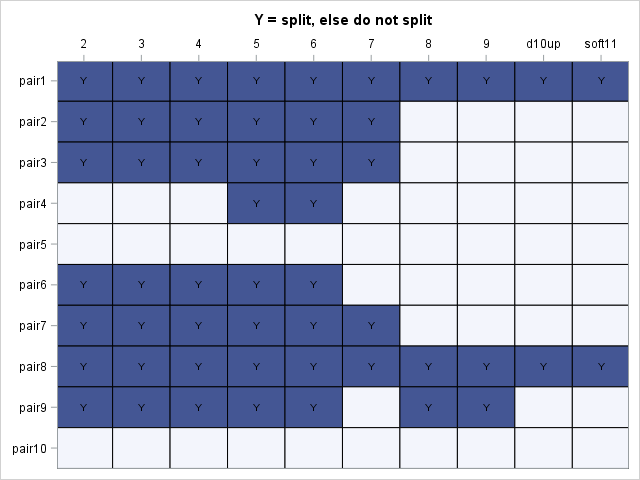 The optimal strategy if you can double down is: 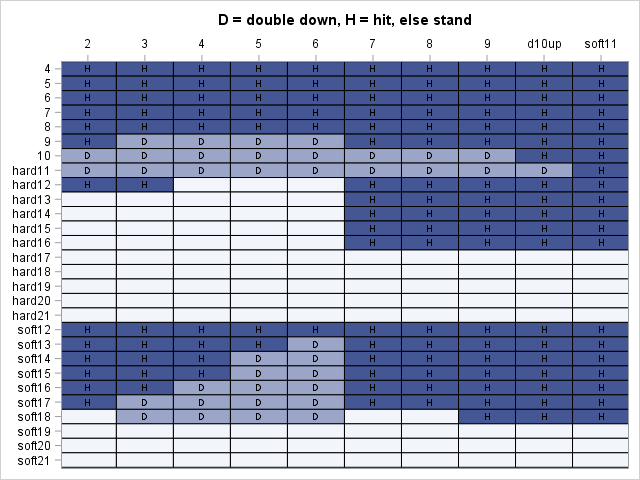 The optimal strategy if you cannot double down is: 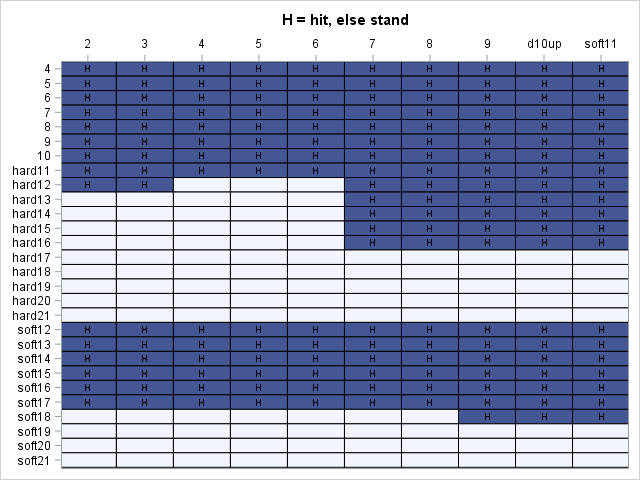 With enough practice, these tables are easy to memorize. In fact, casino gift shops sell wallet-sized versions of them, presumably to boost the confidence of would-be gamblers who might otherwise be intimidated by the pressure of making the correct decision only by gut feeling.

For more discussion and the full SAS code, see the SAS Global Forum 2011 paper Linear Optimization in SAS/OR® Software: Migrating to the OPTMODEL Procedure, which includes a calculation of the player's overall expected profit per hand. Spoiler alert: if you don't count cards, the expected profit is negative, but only slightly.

Rob Pratt has worked at SAS since 2000 and is a Senior Manager in the Operations Research department within SAS R&D's Advanced Analytics division. He manages a team of developers responsible for the optimization modeling language, network algorithms, and the decomposition algorithm. He earned a B.S. in Mathematics (with a second major in English) from the University of Dayton, and both an M.S. in Mathematics and a Ph.D. in Operations Research from The University of North Carolina at Chapel Hill.