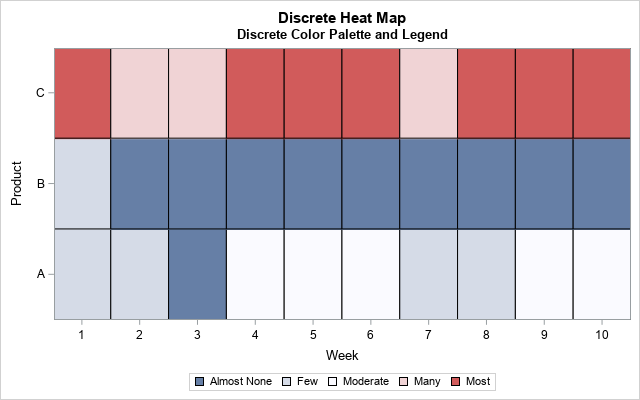 Heat maps have many uses. You can use a heat map to visualize correlation matrices, to visualize longitudinal data ("lasagna plots"), and to visualize counts in any two-dimensional table. As of SAS 9.4m3, you can create heat maps in SAS by using the HEATMAP and HEATMAPPARM statements in PROC SGPLOT. Prior to SAS 9.4m3, you could create heat maps by using the Graph Template Language (GTL) in Base SAS or the HeatmapCont and HeatmapDisc functions in SAS/IML software.

Suppose a store tracks sales of three products ('A', 'B', and 'C') over a 10-week period. You can use a continuous heat map to visualize the quantities sold for each product. Because there are only 10 cells in the horizontal direction, you can optionally use the DISCRETEX option to show all values, as follows: 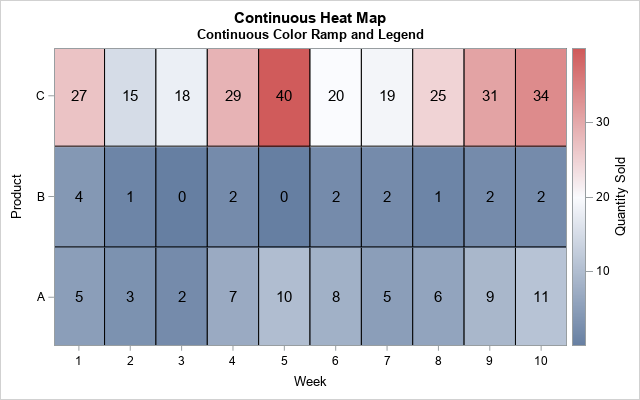 To make the heat map easier to understand, I overlaid the quantities sold for each product and each week. The color of each cell is determined by using a three-color color ramp. The darkest blue corresponds to 0 items sold, the white color corresponds to 20 units sold, and the darkest red corresponds to 40 units sold. The colors for other values are linearly interpolated. A gradient legend to the right shows the association between shades of colors and units sold. You can use the COLORMODEL= option to use a different color ramp.

As I have discussed in other articles, you might not want to use a linear color ramp when the response variable is skewed or contains outliers. In this example, the store sells many more units of product 'C' than 'A' or 'B'. Consequently, most of the cells in the heat map are blue (low) and only a few are white (medium) or red (high). If you bin the counts into meaningful ordinal categories, the low and medium values will be easier to discern.

Use a format to bin the response variable

Let's create a discrete heat map for the Sales data by binning the QtySold variable. You can use a SAS format to bin a continuous variable into ordinal categories. The following call to PROC FORMAT bins the data into five categories by using the cut points 3, 7, 12, and 20. 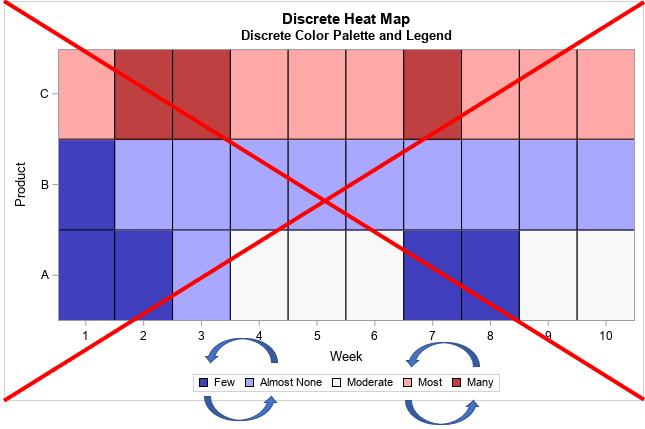 This problem occurs because the order of the groups (and, therefore, their colors) is determined by the order in which they appear in the data set. There are several solutions to this problem, including sorting the data and adding fake observations to the data set. However, the best solution is to explicitly create a mapping between group values and colors. This is called a "discrete attribute map." A discrete attribute map enables you to associate colors (and other attributes) to groups, regardless of how the groups are sorted or used.

Use a discrete attribute map to associate colors to groups

If you encounter this "legend order" problem, a discrete attribute map is the most robust solution. The "map" is simply a data set that assigns attributes to each formatted value of the response variable. The PROC SGPLOT documentation for discrete attribute maps provides details about the names of variables in the data set.

For the heat map, the important attribute is the FILLCOLOR attribute of each cell. Thus, you need to create a data set that has five rows and two variables. The name of the primary columns must be Value and FillColor. You can hard-code the formatted values or you can use the PUT function to format the raw values, as shown in the following program. (I like the second option; it works even if you change the strings in PROC FORMAT.) You also might want to define the ID variable and the Show variables. The ID variable is optional if the data set defines only one attribute map. If you set Show="AttrMap", the legend will show all of the possible values in the legend, even if the data set does not contain all the groups.

The following DATA step defines a discrete attribute map. Use the DATTRMAP= option on the PROC SGPLOT statement to use the mapping, as follows: 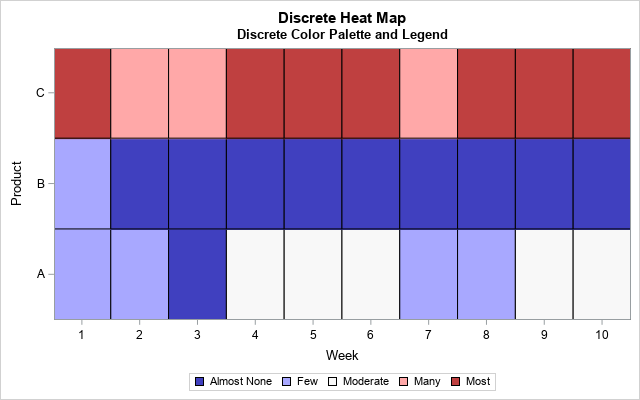