Some say that opposites attract. Others say that birds of a feather flock together. Which is it? Phillip N. Cohen, a professor of sociology at the University of Maryland, recently posted an interesting visualization that indicates that married couples who are college graduates tend to be birds of a feather. This article discusses Cohen's data and demonstrates some SAS techniques for assigning colors to a heat map, namely how to log-transform the response and how to bin the response variable by quantiles. 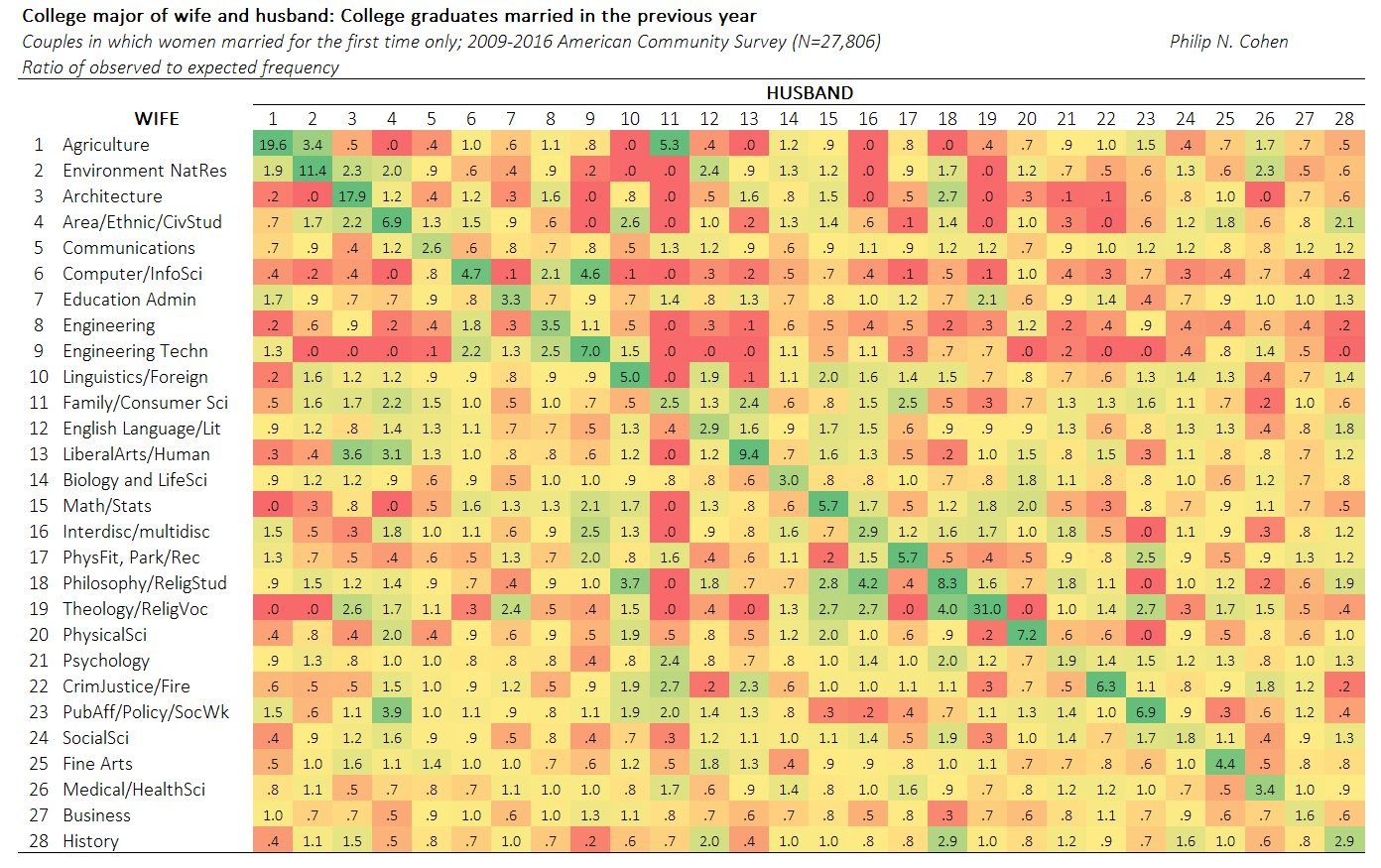 Cohen cross-tabulated the college majors of 27,806 married couples from 2009–2016. The majors are classified into 28 disciplines such as Architecture, Business, Computer Science, Engineering, and so forth. The data are counts in a 28 x 28 table. If the (i,j)th cell in the table has the value C[i,j], then there are C[i,j] married couples in the data for which the wife had the i_th major and the husband has the j_th major.

Cohen used a heat map (shown to the right) to visualize associations among the wife's and husband's majors. This heat map shows the ratio of observed counts to expected counts, where the expected counts are computed by assuming the wife's major and the husband's major are independent. In this heat map, the woman's major is listed on the vertical axis; the man's major is on the horizontal axis. Green indicates more marriages than expected for that combination of majors, yellow indicates about as many marriages as expected, and red indicates fewer marriages than expected. The prevalence of green along the diagonal cells in the heat map indicates that many college-educated women marry a man who studied a closely related discipline. The couples are birds of a feather.

Cohen's heat map displays ratios. A ratio of 1 means that the observed number of married couples equals the expected number. For these data, the ratio ranges from 0 (no observed married couples) to 31. The highest ratio was observed for women and men who both majored in Theology and Religious Studies. The observed number of couples is 31 times more than expected under independence. (See the 19th element along the diagonal.)

A heat map of relative differences 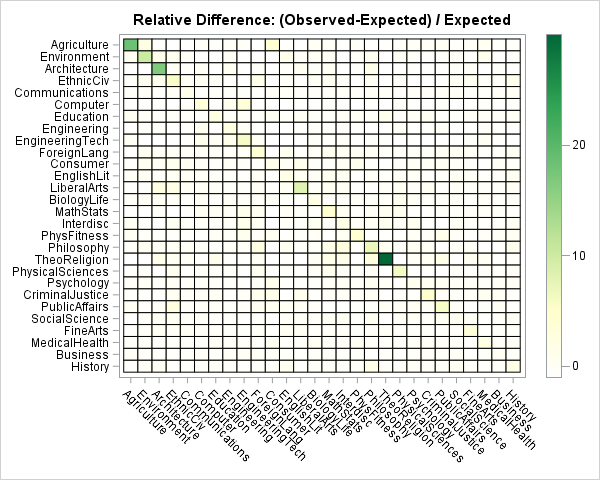 This heat map is clearly not useful, but it illustrates a very common problem that occurs when you use a linear scale to assign colors to heat maps and choropleth maps. Often the data vary by several orders of magnitude, which means that a linear scale is not going to reveal subtle features in the data. As shown in this example, you typically see a small number of cells that have large values and the remaining cell values are indistinguishable.

There are two common ways to handle this situation: 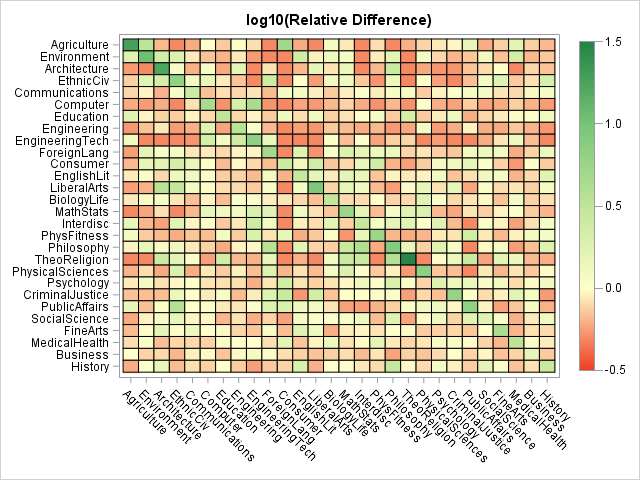 As in Cohen's heat map of the ratios, mapping a continuous color ramp onto the log-transformed values divides the married couples into three visual categories: The reddish-orange cells indicate fewer marriages than expected, the cream-colored cells indicate about as many marriages as expected, and the light green and dark green cells indicate many more marriages than expected. The drawback of the log transformation is that the scale of the gradient color ramp is not easy to understand. I like to add tooltips to the HTML version of the heat map so that the user can hover the mouse pointer over a cell to see the underlying values.

Analysis of the marriage data

What can we learn about homophily (the tendency for similar individuals to associate) from studying this heat map? Here are a few observations. Feel free to add your own ideas in the comments:

It is easiest to interpret a heat map when the colors correspond to the actual counts or simple statistics such as the relative difference. The simplest way to assign colors to the cells in the heat map is to bin the data. This results in a discrete set of colors rather than the continuous color ramp in the previous example. You can bin the data by using five to seven quantiles. Alternatively, you can use domain-specific or clinical ranges. (For example, you could use clinical "cut points" to bin blood pressure data into "normal," "elevated," and "hypertensive" categories. In SAS, you can use PROC FORMAT to create a customized format for the response variable and color according to the formatted values.

When you use a discrete color ramp, all values within a specified interval are mapped to the same color. In this heat map, most cells on the diagonal have the same color; you cannot use the heat map to determine which cell has the largest relative difference. 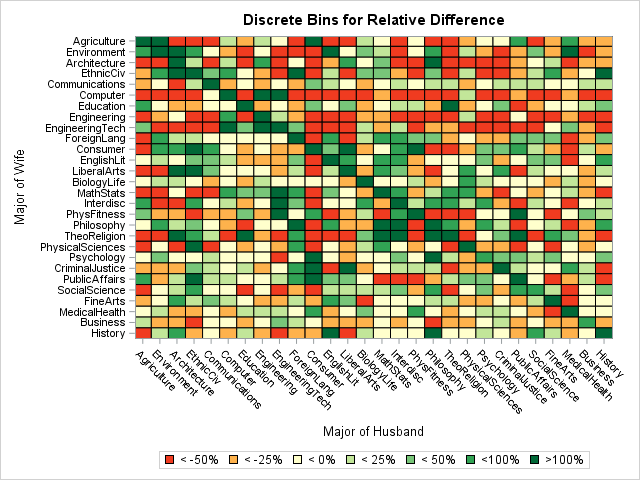 There is much more to say about these data and about ways to use heat maps to discover features in the data. However, I'll stop here. The main ideas of this article are:

You can download the SAS program that I used to create these heat maps.