SAS formats are flexible, dynamic, and have many uses. For example, you can use formats to count missing values and to change the order of a categorical variable in a table or plot. Did you know that you can also use SAS formats to recode a variable or to bin a numerical variable into categories? This can be very convenient because you do not need to create a new variable in the data set; you merely apply a format to an existing variable.

Income categories: Are you middle class?

Many people use several IF-THEN/ELSE statements in the DATA step (or in a DATA step view) to create a new discrete variable that represents binned values of a continuous variable. That is a fine technique, but an alternative technique is to create a user-defined format that bins a continuous variable. One advantage of a custom format is that you can apply the format to multiple variables in multiple data sets.

For example, suppose that you want to define income categories such as "working class," "middle class," and the ultra-rich "1 percenters." According to a 2012 Money magazine article, the following cut points divide US household income into seven categories:

The call to PROC FORMAT creates a custom format called IncomeFmt. When you assign the IncomeFmt format to a numerical variable, SAS will look at the value of each observation and determine the formatted value from the raw value. For example, a value of 18,000 is less than 23,000, so that value is formatted as "Poverty." A value of 85,000 is in the half-open interval [60000, 100000), so that value is formatted as "Middle."

The following DATA step defines the incomes for 26 fictitious individuals. The IncomeFmt format is assigned to the Income variable:

The Income variable is a continuous variable, but the format bins each value into one of seven discrete values. Consequently, SAS procedures can analyze the Income variable as if it were a discrete variable. For example, you can count the number of individuals in each income category by calling PROC FREQ: 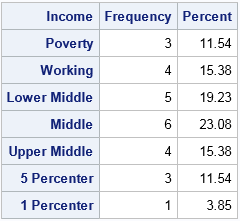 The underlying data values are not lost. You can use a FORMAT statement in a SAS procedure to temporarily assign or unassign a format. If you remove the format, you can analyze the underlying raw data. For example, the following call to PROC UNIVARIATE analyzes the raw incomes:

SAS reports an error because the WHERE clause cannot compare the raw (numeric) values of the Income variable with elements of a set that contains two strings. When you see an error message like this, use PROC CONTENTS to investigate the attributes of the variable:

The output from PROC CONTENTS informs you that the Income variable is numeric and displays the name of the format that is attached to it.

You can use other DATA step functions when constructing WHERE clauses. A typical example is when a variable is a SAS date. For example, the Sashelp.Air data set contains a variable named Date. You can use the following WHERE clause to analyze the subset of data that corresponds to the month of January in years prior to 1955:

As shown in this article, SAS formats are very useful and flexible: