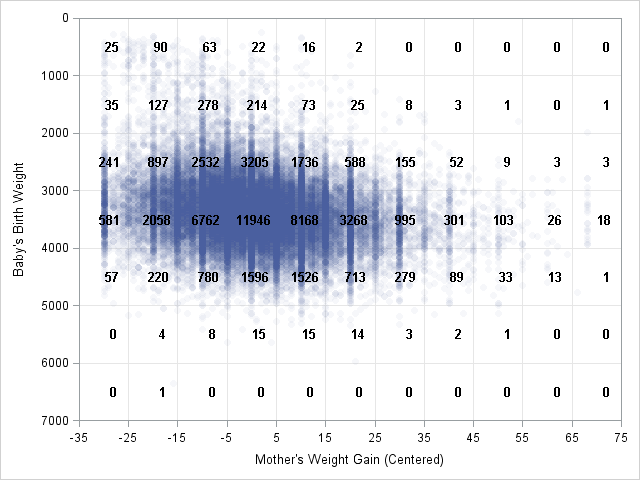 You can also count the number of observations in two-dimensional bins. Specifically, you can divide the X direction into kx bins, divide the Y direction into ky bins, and count the number of observations in each of the kx x ky rectangles. In a previous article, I described how to bin 2-D data by using the SAS/IML language and produced the scatter plot at the left. The graph displays the birth weight of 50,000 babies versus the relative weight gain of their mothers for data in the Sashelp.bweight data set. 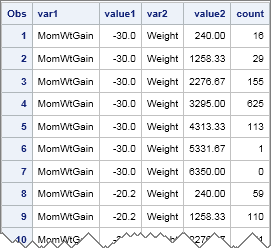 As shown in the output, the the VALUE1 and VALUE2 variables contain the coordinates of the center of each bin. The COUNT variable contains the bin count. You can read the counts into SAS/IML and print it out as a matrix. In the data set, the Y variable changes the fastest as you go down the rows. Consequently, you need to use the SHAPECOL function rather than the SHAPE function to form the 7 x 11 matrix of counts: 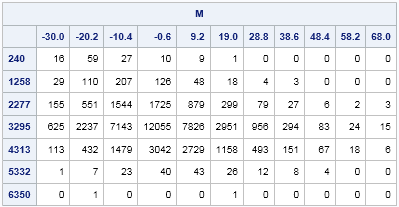 As I explained in Monday's blog post, there are two standard ways to choose bins for a histogram: the "midpoints" method and the "endpoints" method. If you compare the bin counts from PROC KDE to the bin counts from my SAS/IML program, you will see small differences. That is because the KDE procedure uses the "midpoints" algorithm for subdividing the data range, whereas I used the "endpoints" algorithm for my SAS/IML program.

Last week I showed how to use heat maps to visualize matrices in SAS/IML. This matrix of counts is begging to be visualized with a heat map. Because the counts vary across several orders of magnitude (from 100 to more than 104), a linear color ramp will not be an effective way to visualize the raw counts. Instead, transform the counts to a log scale and create a heat map of the log-counts: 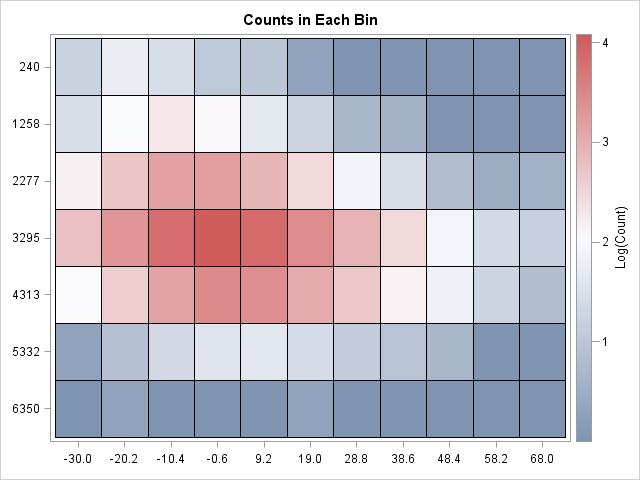 The heat map shows the log-count of each bin. If you prefer a light-to-dark heatmap for the density, use the "TwoColor" value for the COLORRAMP= option. The heat map is a great way to see the distribution of counts at a glance. It enables you to see the approximate values of most cells, and you can easily determine cells where there are many or few observations. Of course, if you want to know the exact value of the count in each rectangular cell, look at the tabular output.