SAS is once again organising a global football tournament open to SAS offices around the world, with the event now in its 20th consecutive year. After winning last year’s tournament in a dramatic penalty shootout against the USA, we at SAS Scotland are looking forward to defending our title in Glasgow.

And for the first time I can reveal an app provided by playerdata will be used to stream data which can then be analysed using SAS Visual Analytics. This brings the tournament closer to SAS’ day-to-day business and no doubt some countries will be using this information to analyse where they can improve.

SEUFI (SAS European Football International) originated in Europe, however the tournament has continued to grow across the entire SAS business, and its reach is now global. This year’s tournament includes 13 teams from SAS offices across the world, with new teams joining from the Middle East and Eastern Europe.  The event will see 400 people from 24 countries in attendance.  The tournament will take place on Saturday 7th September, at the Toryglen football centre next to Hampden National Stadium in Glasgow.  Following a traditional World Cup format, the tournament begins with a group stage, and moves onto a knockout stage to crown the champion.

It was a low-key affair, with all teams involved paying for everything including their own kit and travel.

SEUFI first began in 1996, when four SAS offices (England, Denmark, Germany and France) organised a four-team tournament played in Paris. It was a low-key affair, with all teams involved paying for everything including their own kit and travel.  The tournament took place outside of Paris in a thunder and lightning storm with Denmark winning the first ever SEUFI trophy. Denmark has been the most successful team so far, winning an impressive eight times since the tournament’s inception. Following a two-year hiatus in 1997-98, SEUFI returned, and has now been running for two decades, culminating in the 20th event this year.

Although SEUFI began as an unofficial event, it is now officially SAS-supported and is a big contributor to our company culture. The aim is to bring colleagues together and having a great time. There’s no corporate message, and it’s organised and attended by employees.

The tournament will take place on Saturday 7th September, at the Toryglen football centre next to Hampden National Stadium in Glasgow. Click To Tweet

This is the first time we will showcase SAS technology by streaming player data to provide performance insights, all organised by the Glasgow office’s R&D Centre. SAS is already working with sports teams and governing bodies across the world to improve performance using analytics, with notable examples being British Rowing, the Canadian Olympic Team and the Dutch Football Association KNVB. It also works with Dutch start-up SciSports using multiple high-resolution cameras and advanced deep learning and computer vision technologies, to generate accurate on-the-pitch data.

SAS Scotland is committed to helping and improving the local community. This year, we are focusing our efforts on two charities: the Scottish Society for Prevention of Cruelty to Animals (SSPCA) and Scottish Autism. SAS will be carrying out various fund-raising activities for both these charities during the SEUFI event.

SAS teams involved in SEUFI 2019 are Belgium, Denmark, England, Finland, France, Germany, Italy, Middle East, Eastern Europe, Netherlands, Russia, Scotland, Turkey, and the USA. Good luck to all the teams taking part and we hope some of you will be able to join us or at least follow the action from afar! You can find out more about the competition by contacting me at sebastien.charrot@sas.com. 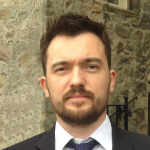 
Sebastien Charrot is a Senior Software Development Manager in SAS’s R&D Scotland office, leading the team building SAS Mobile Investigator, a mobile app built to place the operational and investigative powers of SAS Viya into the hands of users in the field. In his 10 years at SAS, Sebastien has worked on a number of products and teams, specialising in tools and solutions for Law Enforcement, Investigation, and Intelligence Management. He has spoken at several global conferences, including the Conference on World Affairs, and SAS Global Forum. Sebastien graduated from the University of Strathclyde with a first-class Bachelor’s degree (with honours) in Computer Science.