When we talk about artificial intelligence (AI) and ethics, we are not referring primarily to dystopian applications in which an autonomous robot stubbornly makes decisions about life and death without human control in Terminator fashion. Of course, this does not mean that a critical discourse, for example, on autonomous weapons, is not urgently needed, which the Slaughterbots video by the Future of Life Institute and the renowned Berkeley professor Stuart Russell impressively demonstrated.

But we don't have to go that far. Today's AI applications can have a significant impact on consumers, raising governance and ethical issues for businesses. The use of AI in business is aimed, among other things, at automating decisions that were previously made by a human being, for example, a clerk or expert.

Credit scoring assesses my creditworthiness as a bank customer. In its automated underwriting, an insurance company decides whether it accepts to insure my personal risks. The dermatologist evaluates my skin cancer risk by means of image analysis. All this is already a reality today and requires companies to be able to explain and be transparent in their use of AI technologies.

We don't have to start with the moral dilemma in which self-driving cars (and human drivers, by the way) find themselves if they only have the choice between a frontal collision, an evasion to the left into a group of three old men or the evasion to the right into a small family.

You had better think the consequences through

We are talking about much more banal, but nevertheless significant decisions. For example, the US retailer Target already knew about the pregnancy of a teenager even before she had told her father. This is relatively easy with collecting shopping cart and consumer information: If a 19-year-old woman from Portland buys cocoa butter lotion, a large bag, zinc and magnesium preparations, and a light blue carpet in March, a scoring algorithm can determine a fairly high – let's say 87 percent – probability of pregnancy with a date of birth at the end of August. Is it a good idea to use this knowledge and send out vouchers for baby articles or congratulations on pregnancy? Target, in any case, included the young woman in a campaign and sent her relevant coupons – much to the surprise of the future grandfather ; -). The following father-daughter conversation must have been quite emotional.

This example clearly shows that companies should better think through the consequences of their automated decisions and the learned rules for addressing customers. In fact, many companies are already aware that poor or problematic outcomes can have a negative impact on them, and they want to take steps to ethically manage AI and maintain control.

The discussion of AI and ethics is therefore not a purely philosophical and sociopolitical matter. Today, it confronts companies with the concrete task of dealing with governance, transparency and explainability.

SAS supported a Forbes study investigating the interactions between AI and ethics. The researchers surveyed 305 business leaders worldwide, including CIOs, CTOs and chief analytics officers. The results show that 70 percent of companies worldwide that already use AI conduct ethics training for their IT staff, and 63 percent even have ethics committees to assess the application of AI. There is also a connection between thought leadership and ethical awareness: 92 percent of companies that describe their AI implementation as "successful" train their technology experts in ethical issues, compared to just 48 percent of companies that are not yet as advanced in AI use.

The discussion of AI and ethics is therefore not a purely philosophical and sociopolitical matter. Today, it confronts companies with the concrete task of dealing with governance, transparency and explainability. In the second part of this post on AI and ethics, I outline ways from a process and technology perspective to approach these questions. 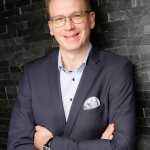 Andreas Becks leads a team of insurance experts, data governance professionals and data scientists advising insurance clients on how to use analytics to generate value and drive transformation in a changing market. His main focus is on data-based innovation and industrialization of analytics. His expertise in artificial intelligence, and deep knowledge of business intelligence and analytics mean that he is well-placed to help insurers to reimagine their business models and drive cultural change.