On July 25th 2017 a new index tracking global crowdfunding and marketplace finance trends was launched. It aims to become the new barometer for the alternative financing market, which gives some idea of the importance of this area at the moment. There is potential for serious capital market disruption.

But just how far can peer-to-peer financing, crowd-funding and other forms of internet-enabled ways of raising capital fragment the banks’ old market share? I caught up with Christian Giraud to hear his views.

Christian, how mature are the alternative financing options in Europe?

"P2P lending has been around since 2005, when Zopa, the very first P2P platform, launched. Zopa has now helped people to lend over US$1.54 billion, and P2P activity has spread all around the world. In Europe, over 80% of the activity is still UK-based, but there is strong growth in Germany and the Nordic countries. For example, in Germany, Auxmoney is one of Europe’s largest P2P lenders, and has facilitated loans of over 465 million euros. In Finland, Fixura has facilitated loans of over 55 million euros. The numbers just keep increasing, and there seems to be a big appetite both for giving and getting loans on this kind of basis. Venture capital is heavily involved in several of these start-ups, suggesting that the market sees a productive future in this sector."

Is crowdfunding a sustainable model?

"I think crowdfunding, like crowdsourcing, is here to stay in some form. It offers a financing option for companies that might otherwise struggle to get investment from more conventional sources, such as angel investors or venture capitalists. Because the individual risks are fairly low, people are prepared to invest. The precise nature of crowdfunding, however, is changing on an ongoing basis. For example, early crowdfunding platforms were often equity-based: investors were given shares in the company. But there are concerns about how that might work if venture capitalists get involved further down the line, so some platforms are now promoting alternatives."

Can these new models actually make a difference against established banking brands?

"The banks have one huge disadvantage. They are stuck with legacy systems, many of which contain layers upon layers of upgrades, add-ons and patches. This means they really struggle to achieve the agility of the new fintechs, and is partly why they have not been able to address the markets that the fintechs are now serving so effectively. But that’s also the key issue: the fintechs are not trying to replace banks, they are serving markets and sectors that were not getting what they needed from the banks, whether that is easy ways to make payments, or capital-raising for very risky groups. I think we’ll see a disruption of the banking sector, but not a wholesale replacement of banks with fintechs or new sources of capital. I think these new sources will open up new markets, and act as a supplement, not an alternative."

The fintechs are not trying to replace banks, they are serving markets and sectors that were not getting what they needed from the banks.

You’ve been involved in the SAS fintech incubator. What lessons can we learn from that?

"I think one of the things that has become really clear is how many potential fintechs are out there. We’ve had discussions with so many potentials, and only three have joined the incubator: that says something about the nature of the market. Fintech is a very young market, and so there are an awful lot of small firms—that, of course, means that identifying a good idea and getting it to market quickly are crucial to getting any kind of first-mover advantage. It is also, however, a bit of a double-edged sword, and means that realistically, a lot of fintechs are eventually going to fail."

How do you see the market developing in future?

"I think the number of fintech firms will inevitably fall, because that’s a characteristic of maturing markets. Will they all fail? No, I don’t think so. The alternative funding market, and the use of fintechs, is addressing a need. There are people and organisations who were massively underserved by banks, and who are keen to access the services offered by alternative capital funders. Fintechs make it much easier to bring these groups together. I think it will be very interesting to watch what happens, though, and particularly whether alternative funders are able to demonstrate that some of the sources that banks consider too risky actually turn out to be very rewarding and reliable loans or investments. If so, I think we’ll see the banks try to step into that space. Then the sparks will really start to fly." 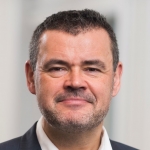 
Keld Zornig is VP of SAS Institute Nordic. Together, the SAS Nordic team of more than 550 analytics software and consultancy professionals service the region’s largest private and public businesses across industries with all their data analytics needs. Keld blogs on how to spot digital opportunities, foster an innovative and inquisitive culture, and drive efficiency gains through an analytical approach.