Application programming interfaces, otherwise known as APIs, are set to radically change the face of analytics. These little bits of code are working behind the scenes, hidden treasures that allow two pieces of code to talk to each other. This means that developers can borrow functionality from other apps. For example, Facebook’s API means that other apps can use its standard sign-in process. Google Maps’ API allows other apps to draw on its maps and location-finding technology, and not have to develop their own.

The potential impact of APIs in analytics is huge. From gathering data from new sources, through modelling and getting the results out to consumers, to evaluation, they can be beneficial to various steps across the whole analytical lifecycle. And this, in turn, is changing the role of data scientists, including citizen data scientists.

APIs and the advancing of analytics

Perhaps the biggest and most obvious impact of APIs is on citizen data scientists, those business users who are also able to do some (often fairly basic, but sometimes more advanced) analytics for themselves. APIs will accelerate the rise of this particular group, because they are likely to make it simpler to do advanced analytics.

The reason is simple. The biggest issue in analytics is first, identifying the right question to ask, which does need human input, at the very least. But the second is to gather the right datasets to solve that issue, and ensure that the data are reasonably good quality. APIs make this second part significantly simpler. This has two major effects: first, it frees up ‘qualified’ data scientist time to do more interesting work, and second, it enables citizen data scientists to step in with new questions to ask of the data, therefore addressing the first issue.

The other benefit of APIs is the bottom line, to put it crudely. APIs allow different bits of software or data to be brought together, using existing functionality. No major investment is required in either coding or infrastructure. The efficiency of these APIs are heavily depending on the usability of the APIs itself as no one wants to spend too much time in getting it to work. For those just starting out down the road towards data-driven decision-making, this is likely to be a major bonus.

APIs also make analytical outcomes easier to understand, with new solutions based around presentation and visualization of the results. Speech recognition APIs mean that chatbots could potentially provide the interface between models and consumers. Some, indeed, have predicted that APIs could render data scientists themselves unnecessary, by enabling machine learning systems to run themselves, without the need to report back to a human data scientist.

This outcome, however, seems unlikely, not least because there is always more complicated analysis that could be used to support decision-making. Instead, it seems more likely that more business users will start to have access to analytics. They will also probably need less support from data scientists to do so, particularly as they learn how to pick the right options from the APIs to answer their questions. More people having access to analytics can only be a good thing for those of us who have been encouraging data-driven decisions for a while now.

An evolving role: some predictions for the future

There is no question that APIs linked to artificial intelligence have huge potential to alter the way in which data are collected, managed and used, across industries. But the key word there is ‘potential’. Yes, these changes are likely to happen, but over time, and the precise length of time is unclear. This, in turn, means that the role of data scientists, including citizen data scientists, will also evolve over time. Many commentators are predicting that more and more business users will become citizen data scientists, and the rise of APIs to do the ‘heavy lifting’ certainly seems to make this more likely.

It remains hard to predict, however, how exactly the role of qualified data scientists will change. In my view, there are two possibilities, which are not mutually exclusive. Data scientists may start to work on more complex analytics: the ‘more of the same’ route. This will continue as long as analytics systems need a human interface. The alternative option is that data scientists become computer scientists: they take on more of a role in overseeing the work of citizen data scientists, and ensuring that the right questions are asked, monitoring the quality and efficiency of machine learning systems and managing the way in which machine learning systems are used.

Both are possible. It will be interesting to watch developments.

You might also be interested in this TDWI Best Practices Report which focuses on experiences with BI, visual analytics, and visual data discovery to uncover how organizations can make users more productive with data and use technologies to improve collaboration. 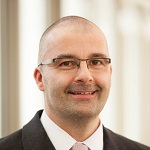 
As a Senior BI Solution Manager in the Global Technology Practice, Gregor is responsible for enabling the presales force in EMEA/AP to sell and position SAS BI products successfully. Furthermore he is supporting the product development by gathering requirements from the field and helps Product Management to prioritize them according to market needs. Both on external conferences and SAS User Forums Gregor speaks on BI topics or unveils the latest innovations in SAS’ BI product portfolio. Gregor has nearly 20 years of experience in IT industry. Before joining SAS in 1998 he worked for Fraunhofer Institute of Experimental Software Engineering and taught mathematics at a private school. He started as a SAS Trainer and was certified as SAS Mentor and SAS Accredited Trainer for more than 20 different courses. In 2005 he took over technical product management for SAS BI products in Germany. With the introduction of SAS Visual Analytics Gregor helped to push this new product into the market as a spearhead of the DACH region. He joined the Global Technology Practice in 2013 and recently returned from a secondment to the UK back to Germany. Besides spending his spare time with his wife and his 3 children, he loves to bike and run.