For nearly a century, the buyer’s journey was relatively linear. Advertising messages distributed across a few mass media outlets were the primary method of spreading awareness. Purchase consideration generally occurred by reading product brochures and conversing with salespeople, friends and family.  A purchase was made, and if the product did its job, some level of loyalty followed.

In a digitally networked world, the narrative is not as simple. In 2012, Google and Shopper Sciences did a study of the purchase journey of 3,000 different customers in tech, CPG, automotive, and finance, and literally found 3,000 different paths to purchase. However, there were five common hubs (online, friends & family, print media, TV, and brick and mortar) that consumers visited along the way to a purchase decision. Consumers chose their own journey and hit each point along the way in the order and time that made the most sense to them.

In a B2B scenario, a similar pattern emerges. Multiple reports show that 55 to 75 percent of the buying process has been completed prior to a prospect reaching out to a potential vendor.

“By the time we reach the age of 66, most of us will have seen approximately two million television commercials. Time-wise, that’s the equivalent of watching eight hours of ads seven days a week for six years straight. In 1965, a typical consumer had a 34 percent recall of those ads. In 1990, that figure had fallen to 8 percent. A 2007 ACNielsen phone survey of one thousand consumers found that the average person could name a mere 2/21 commercials of those they had ever seen, ever, period.”

Because of the sudden ubiquity of both publishing and consumption capabilities, attention has become one of the scarcest resources of all.

So how does marketing respond to this new reality? Let’s come back to that in a minute. When I was a boy, I loved “Choose Your Own Adventure” books. Not only because I could do a book report on a book that was 144 pages long when I had only read 40 of them, but because it let me read a story that I had helped co-create. The end of the story was a direct result of my input along the way. If you are unfamiliar with the series, the “Choose your own adventure” series were books based on game theory that often had as many as 20 or 30 alternate endings. The story would unfold as you made decisions for the protagonist in the book.

I now have 3 young boys of my own. When my sons were toddlers, their experience at the playground was almost exclusively guided by me. I led them to the swing, the slide, and held their hands walking up the steps.

As they got older, they understood more about the world around them — what activities they enjoyed most, and what they felt like doing that day. Because of that, they began to create their own experiences at the park.

Novice chefs are given recipes to execute; They include the exact ingredients, temperature, and materials. They are to follow instructions. But the most creative chefs in the world are constantly learning, experimenting, and innovating, uniquely mixing an infinite amount of ingredients, temperatures, flavors, textures, and cooking tools to create amazing new flavors and experiences for those fortunate enough to enjoy them.

Daniel Pink, in his book Drive, describes the three primary motivators that drive behavior: Autonomy, Mastery, and Purpose. We can see each of these at work in the illustrations above.

So then the primary challenge for marketers is to understand the context and the journey and to enable customers to consume, share, and interact as they desire.  Being prepared to respond with a compelling value proposition, regardless of where they are in their journey, and regardless of which channel the interaction takes place in is the challenge.

I wanted to go on adventures. My sons wanted to play. The chefs wanted to create something amazing.

Never before have we had an opportunity to learn so much about our customers, in ever narrowing feedback loops. Appending fundamental demographic and transactional data with social, geo-location, and other digital behavioral data to construct psychographic profiles holds a greater promise to enable marketers to gain a deeper understanding of their customers. This deeper understanding allows organizations to respond with offers that have a higher chance of resonance.

Exponential technological innovation has given corporate marketers and their audiences unprecedented capabilities to find people, products, and information in record time.  Next generation marketers should seek to unleash their customer’s creativity, by empowering them with the right set of tools, information, products, and services at the right moment in their journey.

This is the first in a series of three posts on The Digitization of Everything by guest contributor Brian Vellmure. Brian is an accomplished business leader, management consultant, keynote speaker, and an award winning syndicated blogger. For more updates and insights from Brian, please visit his blog http://www.brianvellmure.com/ and follow him on Twitter: @BrianVellmure. 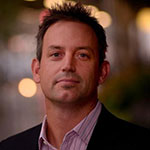 Brian Vellmure is an accomplished business leader, management consultant, keynote speaker, and an award winning syndicated blogger. For more updates and insights from Brian, please visit his blog and follow him on Twitter: @BrianVellmure