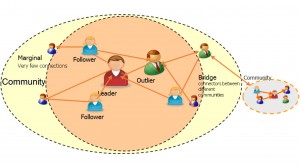 It’s an interesting question, right? We all know our customers talk among themselves about our products and our brands. They do it in person, on the phone and on social media. Heck – even we marketers talk among ourselves and sometimes it's about our customers. It’s what people do – we’re social beings.

And social beings have varying degrees of influence, or clout. Sometimes it’s because of expertise (think Warren Buffett), or credibility (think Oprah Winfrey), or having the moral high ground (think Mother Teresa), or sheer charisma (think President Clinton). In social media circles, folks with influence include Brian Solis and Scott Stratten to name a few. Sometimes its other factors like celebrity that drive clout (think Sofia Vergara or Ryan Gosling). But every community has its leaders, and they have clout simply because their followers listen to them and care about their opinions.

Knowing that, I find it fascinating that a company like T-Mobile is able to discern which of its 45 million customers have clout. The funny thing is that number of customers is more than the entire combined populations of Canada and Sweden, yet T-Mobile is "just" the 4th largest wireless services provider in the United States. They have their sights set on growing to #1 and I can see that they have a fighting chance based on how they channel their marketing resources to the people who have the most clout by using Customer Link Analytics.

Customer Link Analytics is the study of interactions between customers to identify relevant customer communities as well as the importance of individuals within the community. The customer links that comprise these social networks are often shown in diagrams as nodes (people) and lines (connections). It turns out that you can show the strength of connections mathematically.  If you use the diagram, then the width of the line might show the strength of the connection.

T-Mobile uses social network analysis on call data to discern communities and then determine the influencers within those communities. Once they’ve done that, they can focus their marketing efforts based on the actual relationships among the people in the network to achieve 3 broad goals:

For more details about this great story, you can tune in to the SAS-sponsored MarketingProfs webinar about T-Mobile using customer link analytics on Tuesday, November 19, 2013 at 1:00pm ET. It’s called “Kiss Churn Goodbye with Data-Driven Campaign Management."  If you’re not able to catch it live, you can access the ondemand version afterward at sas.com – stay tuned for an update below with the new link.

As always, thank you for following!

Hi, I'm John Balla - I co-founded the SAS Customer Intelligence blog and served as Editor for five years. I held a number of marketing roles at SAS as Content Strategist, Industry Field Marketing and as Go-to-Marketing Lead for our Customer Intelligence Solutions. I like to find and share content and experiences that open doors, answer questions, and sometimes challenge assumptions so better questions can be asked. Outside of work I am an avid downhill snow skier, hiker and beach enthusiast. I stay busy with my family, volunteering for civic causes, keeping my garden green, striving for green living, expressing myself with puns, and making my own café con leche every morning. I’ve lived and worked on 3 contents and can communicate fluently in Spanish, Portuguese, Hungarian and get by with passable English. Prior to SAS, my experience in marketing ranges from Fortune 100 companies to co-founding two start ups. I studied economics at the University of Illinois at Urbana-Champaign and got an MBA from Georgetown. Follow me on Twitter. Connect with me on LinkedIn.