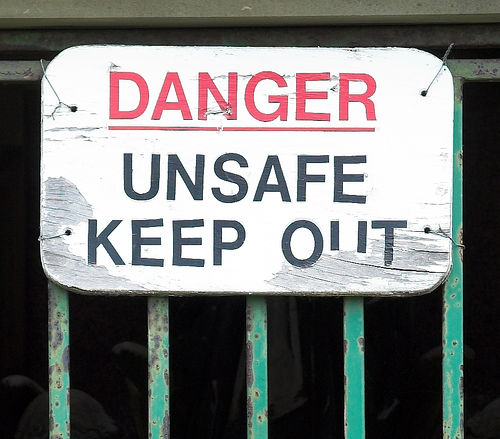 One of my favorite podcasts is Media Hacks, which features Mitch Joel, C.C. Chapman, Julien Smith, Chris Brogan, Hugh McGuire, and Christopher S. Penn discussing a loose agenda of topics spanning social media, marketing, technology and the ways we create and consume content in the modern world. On one episode, for instance, they debated the question, “What is a book?”

I often learn new things from the podcast, but I enjoy it more as a peek into the social media zeitgeist. Plus, the vibe is more like sitting around a bar with a group of smart, funny, enthusiastic friends than like a seminar.

On their most recent episode, Mitch said he occasionally gets complaints from listeners about the “NSFW” (not safe for work) language they sometimes use. Julien especially likes to shoehorn the F-word into every conversational nook and cranny.

The question they pondered was whether or not they should be worried. Here’s how they described it in the show notes:

I have no problem with strong language. I worked in the music industry for several years before coming to SAS. People at the record label seemed to use swearing as an auditory reminder, both to the speaker and the listener, that they weren’t working for “the man.” The Media Hacks crew touched on that in the “selling out” discussion.

But I have a different perspective as someone who now works inside a large company. On many occasions I’ve wanted to forward episodes of Media Hacks to colleagues because they were discussing a topic directly related to what we do. Every time I’ve had to stop and wonder if there was swearing in what I was sending, and if I thought the recipient would be offended. Sometimes I haven’t been sure and haven’t forwarded the content.

Does that mean I’m too uptight? Too concerned about superficial things like etiquette rather than the value of the content? No, that means I work for a large company, that, like every other large company, has HR policies and conduct guidelines.

It’s not just that I don’t want to break the rules. I don’t want to offend anyone, make them feel uncomfortable or, at a stage where I’m trying to convince people that social media is an important tool for business, give them a reason to dismiss it as unprofessional.

On several occasions I’ve been asked to recommend social media speakers for events. I’ve tempered my recommendations based on what I know of the speaker’s public persona. I would not recommend a speaker to one of our large executive events who I knew was going to stalk up and down the stage shouting obscenities.

So my answer to you, dear hacks, is yes, swearing can affect both your reputation and your growing audience. I’m not saying you should necessarily care about that. I’m not judging you or wagging a finger.

I’m just telling you that right now, you’re NSFW. Whether or not you want to be SFW is up to you.