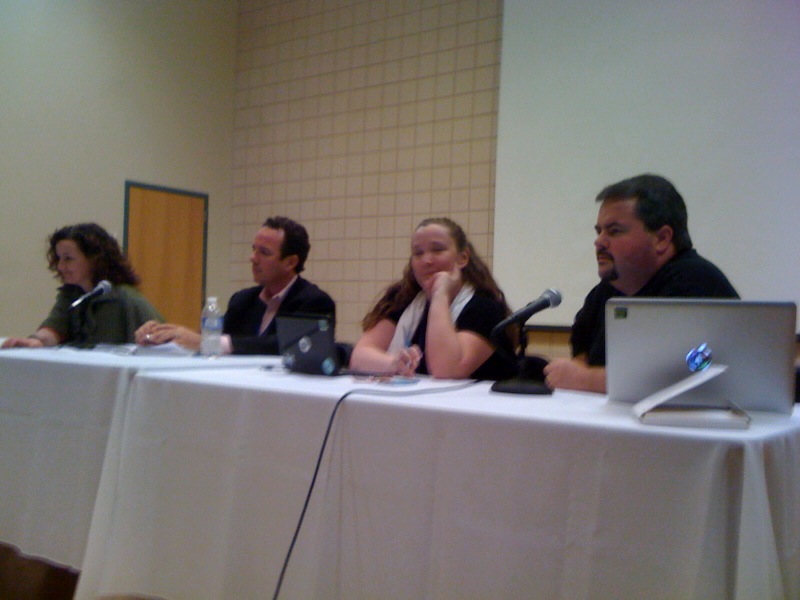 Jeff Cohen started the panel with a question: Has social media gone beyond communications? Does it impact everything a business does?

Jason: "Social media" is an adjective. There's always something after it. The "thought leaders" in the social space have been talking about the concept of social business for the last year or so. If you take away all their marketing spin, it comes down to how we are engaging customers. Social media marketing allows for individuals and brands to engage their customers on a level they've never done before. If you transfer the online engagement to offline, like Panera offering free wifi, yes they are turning themselves into a social business, but they're finding a new way to engage customers.

Lucretia: I argued against the term "social media" pretty vehemently for about a year because it referred to the tools. One of the things I've found is you don't get to control what people call something. The community, and by that I mean the people with the loudest voice, tend to pick their own terms. A couple of years ago we were stuck on "Web 2.0." "Social media" has become our junk bag term for "anything that might possibly use Twitter." It really is supposed to be in relation to using specific tools to achieve a goal, but that's not how people use it.

John: When I was a lowly marketing assistant for Sara Lee, the magic bullet in marketing was getting the right message to the right customers at the right time. Now you have that power and it's freaking everybody out. Who cares what you call it? In the end of the day it's about engaging people in a real, authentic and meaningful way. We'll go through another naming cycle in the next six months. The reality is it's about customer engagement.

Laura: The word is "media." We'll get over the "social" part eventually. Do we call it "book media" or "radio media"? In March 2007, I looked at my then-husband and said, "Where do I do the browser upgrade to get Web 2.0?" And I wasn't kidding. It's silly to have a social media specialist.

Jeff: Beyond the term, what is changing about how businesses communicate? Should companies wrap their heads differently around how they engage with customers?

Lucretia: "Only if they want to do better." The 20th century is over but we're back to 19th century ways of communicating. It's about how people share information. It's the same as it's been for centuries.

Jason: Because of social tools that businesses see as beneficial, we're returning to our moral compass as a marketplace and a society. We hear terms like honesty and transparency. If you strip away the technology and corporate mumbo jumbo, consumers are saying, "Stop lying to me and telling me to buy crap. Allow me to rely on the word of mouth marketing and referrals I get from my friends, not listening to marketing and advertising spin."

Lucretia: Criticism is a privilege to a business owner and if you don't see that, you're missing an opportunity to do better.

John: We're still in early days. Jason and I were saying that next year we need to spend more time at conferences talking to people outside of the group of people who already understand social media.

Jeff: We realize that times are changing. What do businesses need to do now to be properly positioned in the next three to five years?

Laura: Start listening. My four word social media hack: Listen, learn, care, serve. The more useful your content is for someone else... This is a service business.

Lucretia: I'm not sure about the "serve" part. A lot of people in social media don't have that noble intention, but I didn't go out to make the world a better place. I wanted to connect with people, but it wasn't with the intention to serve.

Laura: If a company is generally solving someone's problem, their sales go up, so it isn't as altruistic as it sounds.

Lucretia: One of the things I keep hearing, when we mention the legal department, it's said as an epithet. If you want to change it, we'll have to change the legislation. Companies need to get active in changing liability laws so that those things the lawyers are worried about won't be an issue in five years. The lawyers arent' just mean; it's their job to protect the company's interest. How do we change the legislation to reflect how our businesses will operate in the future?

John: This will come down to business results. At the end of the day if you can't answer the question empirically that it sold more stuff, it won't get done.

Jason: Apple has created a community without trying to create a community, because they make good products. Fan groups for products, TV shows, etc. have grown up because of the fans.

Lucretia: No Facebook fan page will ever make up for a crappy product.

Jason to Laura: You said yesterday that you put all of your eggs in the Twitter basket. What if Twitter changes or goes away?

Laura: In 2008 I staked my whole livelihood on the idea that Twitter would take off. The key of Twitter is mobile, social, networked small messages. If Twitter goes away, the things I am still interested in will endure.

Question: You talked mostly about social media for marketing. Can you reframe the comments on how to use social media for publishing? When you're trying to get the news in social media, how do you reach the people who are used to the newspaper.

Question from Wayne Sutton: There was a time when businesses were trying to create their own social networks. It really didn't work because they found their customers were on Facebook, forums, Ning, etc. Is it valuable now for businesses to create content and own it on their websites?

Jason: I agree that businesses need to be all about creating content, but they have to be not content centric but consumer centric. If your customers are on Facebook, give it to them on Facebook. They may not want to go to your Web site.

Laura: Be super careful what you measure. If the numbers are "super easy" to measure, they may not actually be valuable. I had a business ask me how many Twitter followers meant we were doing a good job. It depends on who you are and what you're selling.

Adam Covati question: There are a lot of people here with a lot of needs. What have you seen that is your pet favorite that actually does something useful?

Jason: When I worked for the alcohol, wine and spirits industry I spent all my time on a forum about bourbon at straighbourbon.com, because those guys were "flippin' crazy about bourbon." I could go to them and tell them we were launching a new product and not just get the message out to 300 people, but 300 people who would influence thousands. Forums and message boards, depending about the niche, can be a very important component of your marketing mix.

Lucretia: My favorite thing this year is Whrrl. Robert Scoble said it's the next Twitter.

Question: As a state government employee I had to fight to get here. I have to go back to my office and explain why we should engage in social media. I need concrete advice.

Jason: Social media has emerged because this is where the majority of the American people have gone to talk about products and services, including governments, and you work for us.

Laura: Social media saves money. As a taxpayer I'm getting annoyed that my tax dollars are being spent on expensive things that don't work.

John: Show them that people are already talking about you online and that you aren't there.

Question: I have a personal pet theory that B2B and B2C are going away. It's all just P2P. What are your thoughts on B2B and B2C emerging as just "marketing"?

Jason: Laura said it earlier: It's person to person (P2P). You sell to people. If you're reaching out to them in an honest way, you'll win. That's how it's always been; we're just putting it into words.

Lucretia: People don't buy from companies, they buy from people. If I'm going to refer a service provider it's because I have a relationship with them.

Laura: The reason my name is Pistachio is because I had a hideous green home office. My first Twitter account was called Pistachio and was very anonymous. Don't look at anybody else and think they know it and you don't. Just do it and screw up and iterate. My best thing? Be lucky. I've been in the right place and I'm grateful.

John: As a 12-year consumer packaged goods guy, you get trained early on that Proctor & Gamble invented it and there's a model for how you do it. That model does not work here. I tried to use it and failed miserably. To get over that model I talked to the most knowledgeable people in the space and asked, "How do I do this?" and I listened.

Lucretia: I've blogged for a really long time. As a college professor I used to teach people how not to leave an Internet footprint. For the first year on Twitter I refused to say who I was and refused to trust anybody. It wasn't until January 2008 that I decided to come from behind the curtain and took responsibility for what I was doing. Owning what you do is the hardest thing ever, because sometimes we do really stupid stuff. The smartest thing I did? I've been very lucky in my opportunities and the people I've gotten to know. Those opportunities present themselves; the smartest thing I've done is to take them.

Jason: I did not prioritize search for my clients for a year or so and I regret that because I could have done a lot better job for them. The one thing that I've done right, and has gotten me in trouble, is that I am unbelievably honest to a fault and have no edit button whatsoever. When people ask for my opinion, I give it.