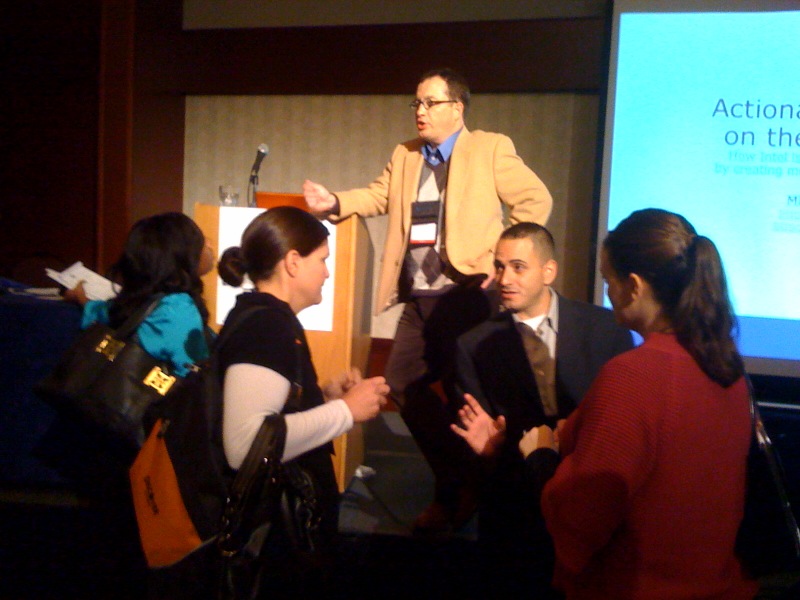 For their Ajay Bhatt campaign, Intel found their was a huge outpouring of demand for t-shirts with Ajay's picture, based on the conversations on Facebook, Twitter, blogs, etc. They gave away 100 t-shirts in June, sent the winners the shirts and asked them to upload photos of themselves in the shirt. The web metrics show there are still people searching for "Ajay Bhatt t-shirt contest." Michael is engaged daily with 15-20 of the winners. Lots of them still comment on Intel news, retweet it, etc.

Search for "Ajay Bhatt" in Facebook and there are mutliple fan pages. One is official, has 1500-2000 fans and has a lot of engagement.

"Did it move the needle, did it impact sales? I don't know." But it created memorable brand experiences for the people involved.

"Social media is not a campaign, it's a relationship." That's harder to get management to buy into. Hansen's started with a "Hansen's Loves San Diego" photo contest. They asked people to take a picture of themselves in San Diego with a can of Hansen's. It was quick, "got some uptake." The results were "okay, not out of this world." They wanted to go back later and do some more, but the fact that they had looked at it as a campaign and not a relationship meant that all the traffic they had built in Twitter, Facebook, etc. had died off.

They changed their social media stance from broadcasting ("Hey, we don't use high-fructose corn syrup!") to a more conversational stance. They tried to tweet things more relevant to the audience (information on natural foods, gardening, etc.) It changed the nature of the communication with audiences. They had direct interactions with customers and even got
mentioned as someone to follow in Twitter in "Follow Friday" tweets.

Offline is just as important as online. Hansen's had street teams as well, giving away cans of Hansen's, driving around in Smart cars, taking photos of fans with the cars, posting them to the Facebook page and encouraging fans to come to the site and tag themselves.

San Francisco campaign traffic was 70+ percent referrals from social media sites. Over 40 percent of the referring traffic was from Facebook. More than 15,500 votes. Ten percent of the people who came to the site engaged and voted, compared to 1 to 2 percent average.

They have fans who are interacting with them as friends online. The next step is to build on these relationships and take it to the next level, enlisting their new online evangelists to spread the word.

Started at Symantec in the B2B-focused side. Symantec inherited an existing community from Veritas acquisition in 2003. Customers kept it going. Tom reinvigorated it. There were three
superusers who answered 90 percent of all customer inquiries. Tom made them his "VIP group."

In about four months they created the Symantec Technology Network: user driven site including tech news, tech videos, expert blogs and forums. Tom moved on the Cadence, where "community became the front page."

"Promotion of your community is key. At Cadence, we put the community front and center on cadence.com."

The community was limited to two main sections, forums and blogs. Tom looked at blogs "in a new way; treating them like a newspaper." Tom set up weekly editorial meetings and had an
editorial calendar. "Your bloggers aren't journalists, they are your advocates. They need to be guided and given some help. Having a managing editor is really key."

To what extent are your campaigns and engagements providing incentive for participation. What do you think the FTC rulings will do?

Becky: Hansen's incentive was the possibility of winning $500 in the contest. For anyone who entered, money was donated to a San Francisco urban gardening project. As far as the FTC ruling goes, there was a session at Blogworld. From what she saw, the Hansen's campaign would not have been affected as it was a traditional product giveaway and contest. Since these were consumers and not bloggers, she doesn't believe it would be covered under the FTC rules.

Michael: Contests are good for launching campaigns but not for sustaining relationships. Intel is full disclosure on everything. We're very careful with how we interact with bloggers, isclosing everything.

If you're a community manager, you never want to reward your superusers monetarily. They want recognition. You can create fun and creative ranking systems that people can move through. They get special icons they can use for their LinkedIn pages, blogs, etc. If they're really dedicated, fly them out once a year and let them speak on a panel, but " I would never pay for a post or content in any way."

Have you considered LinkedIn?

Tom: Cadence has a strong presence on LinkedIn and we're using it more and more. Becky recommends that as many employees as possible be on LinkedIn and use it to share content like blogs and connect. LinkedIn groups are valuable but take a lot of work to keep up. "The Q&A section is also great." If you're an organization that wants to be known as a thought leader, get your execs to answer questions and increase your visibility.

Question: I've got a forum with 1000s of people. Facebook and Twitter are taking them away. How do you get them to engage?

Michael: Fish where the fish are. Corporate websites are becoming irrelevant and they aren't always going to come to your site. Go out and communicate in the third-party sites and become a trusted advisor. Then when you post something on your site, people will come to it because they trust you and the value you offer.

Becky: We don't own our brand anymore. Let your employees interact as people with other people. That will be very important in creating the right brand impression.

Tom: As long as they don't violate the guidelines, leave those negative comments up. You need to figure out the problem and engage with them. If you delete them, they'll take them somewhere else.

Becky: Much better to have the negative comments on your own site so you know where they are.