When you use PROC MEANS or PROC SUMMARY to create a summary data set and include a CLASS statement, SAS includes two variables, _FREQ_ and _TYPE_, in the output data set.

This blog shows you two ways to interpret and use _TYPE_ using the data set Shoes in the SASHELP library.

Here is a listing showing the first five observations in this data set:

Because there are many regions and products, we are going to include a filter (WHERE statement) to restrict the number of Regions and Products. The first program looks at the sum of Sales for each Region.

The option NOPRINT suppresses the printed output (remember we are creating a summary data set).  The WHERE statement is selecting two Regions and three Products. The AUTONAME option in the OUTPUT statement automatically names the variables in the output data set. It uses the variable name(s) in the VAR statement, adds an underscore, followed by the name of the statistic. Here is the output:

The variable named Sales_Sum is the sum of the variable Sales and is given this name because of the AUTONAME option mentioned above. The first observation in the output data set shows the sum of sales for all Regions and the value of _TYPE_ is 0. The second and third observations are the sum of Sales for each Region and _TYPE_ has a value of 1. We will get into a detailed discussion of the _TYPE_ variable in the next example where we use two CLASS variables.

This next example uses two CLASS variables—Region and Product.

The listing is shown below: 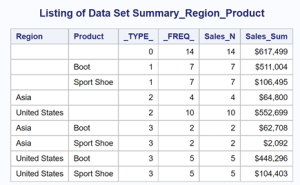 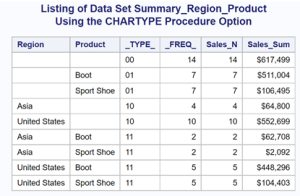 _TYPE_ is now a character variable with a string of 0s and 1s replacing the values of 0 to 3 with their binary values. To determine what each value of _TYPE_ describes, list the two CLASS variables and below them, the value of CHARTYPE, like this:

Because you usually want the statistics broken down by each of the CLASS variables, in most cases you will want to include the NWAY option. I like to remember to write NOPRINT and NWAY together so that I don't forget.

In this last program, I'm going to show you how to use the _TYPE_ variable to create a separate data set for each value of _TYPE_. First, you need to run PROC MEANS without the NWAY option and include the CHARTYPE option. You follow this with a DATA step that create four data sets, each one corresponding to a different value of _TYPE_. Here is the program:

Hopefully, this blog has given you the confidence to use and understand the _TYPE_ variable. If you want to learn more about programming in SAS, check out my book Learning SAS® by Example: A Programmer's Guide, Second Edition.