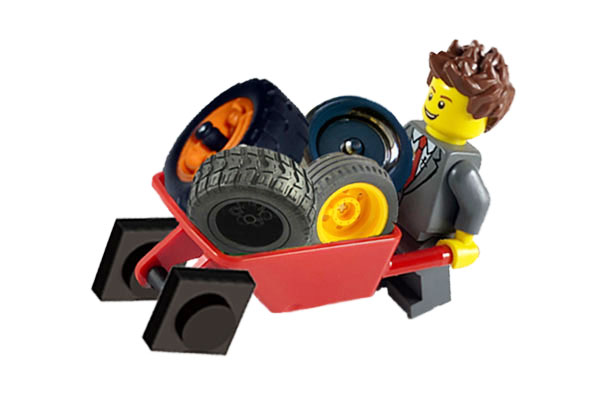 Every year on March 14, we celebrate Pi Day in recognition of the famed mathematical constant π. This date in the format MM/DD is 3/14 which corresponds to the first three digits of the π value 3.14.

While it is impossible to overstate the significance of π in its fundamental and legendary role of being a constant representing the circumference/diameter ratio, its usage for area and volume measurements is not as much of a “settled science” as you may think. In this post, I dare to debunk the notion of π being an inherent component of the omnipresent circle area and sphere volumes formulas:

Believe it or not,  we can significantly simplify these formulas by getting rid of π altogether. Wanna know how? Just sit down, relax, open your mind and fasten your seat belt.

(Definition: A misnomer is a wrong or inaccurate use of a name or term.)

Here is how Wikipedia explains this exponentiation phenomenon:

Wait a minute! Exponents b2 and b3 are mathematical operations from the Algebra Department. They are just abbreviations for multiplication operations and have nothing to do with geometrical shapes and exist independently from geometry and area/volume calculations.

The same semantical problem persists with the reverse terms square root and cube root. All natural numbers N have their corresponding root operations, which we call the Nth root. So why do we need this suggestive verbal association of the area/volume measurement units to squares and cubes?

Moreover, the very word “area” itself is often replaced by square footage, square mileage, or square something thus further implying that areas and squares are synonymous. To me this is like calling a round wheel “a rolling square”.

Overall, this square/cube-centric language insidiously conditions our minds into thinking only in terms of squares and cubes regarding the units of area and volume measurement.

Why do we measure area of a circle in squares?

We all know from middle school’s elementary geometry that area of a circle of radius r is A = πr2 (or A = πd2/4 using diameter d since r = d/2). Many famous ancient mathematicians from Archimedes to Eudoxus of Cnidus to Hippocrates of Chios have proven this formula. There is also a multitude of its proofs using modern methods rooted in trigonometry and calculus.

However, all these methods have one funny thing in common. It is the presumption that an area must be measured in squares (square inches, square meters, square miles, etc.). Think about it for a minute: for thousands of years we have been measuring round areas by the number of squares with a side=1 covering that round area. C’mon! We invented the wheel, electricity, engines, airplanes, telephone, radio, TV, computers, spaceships, artificial intelligence and more, but we are still measuring round areas in squares!

It makes perfect sense measuring rectilinear areas in square units – they are a good fit for each other. But measuring round areas in squares?! What would you say if in reverse we were measuring square areas by the number of round coins covering them? How is that not as good as the opposite?

Wikipedia defines area as "the quantity that expresses the extent of a region on the plane or on a curved surface... It can be measured by comparing the shape to squares of a fixed size." Sure, it can. However, it does not have to be measured in squares (square units).

When it comes to the units of area, it can be a square, a rectangle, a circle, an oval, a star, even a snowflake or any other two-dimensional shape of a specified size as long as its definition is clear and unambiguous.

Without further ado let’s define a circular unit of area as an area of a circle with the diameter d=1 unit of length (inch, foot, meter, etc.).

In order to measure areas of different sized circles, we do not need to count the number of these single unit circles placed side by side within the measured circle. We just place these two circles concentrically and expand or shrink our gauge circle until they align.  Here is a visual to illustrate this:

For a circle with the diameter d, we can express its area measured in the circular units Ac using the following formula:Ac(d) = d ⋅ d = d2

I would not call d2 as "d squared" here. The power of 2 is an indication of two-dimensional area while d is a one-dimensional length.

Let’s prove this formula. Suppose As(d) is a circle area with diameter d in square units and Ac(d) is the circle area in circular units.

Therefore, Ac(d) = Ac(1) d2 = d2, that is we effectively eliminated π from the circle area calculation: 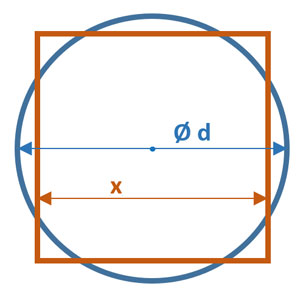 Notice that π-wise these two formulas for area, Circle_Area=(π/4)d2 [square units]  and Square_Area=(4/π)x2 [circular units], are literally upside-down version of each other.

and the volume of a cube with a side of x is:

Again, here I would not call d3 and x3 as "d cubed" and "x cubed" since the power of 3 is indicative of three-dimensional space while d and x are one-dimensional units of length.

Similarly to area calculations, π-wise these two formulas for volume, Sphere_Volume=(π/6)d3 [cubic units]  and Cube_Volume=(6/π)x3 [spheric units], are literally upside-down version of each other.

If you still doubt the validity and/or practicality of my geometric deductions, check out circular mil units of area adopted for wire size measurement by the US National Electrical Code (NEC) and the Canadian Electrical Code (CEC).

A circular mil (cmil) is a unit of area equal to the area of a circle with a diameter of one mil (one thousandth of an inch or approximately 0.0254 mm).

While applied just to one particular unit of length – mil, it is exactly the same circular units of area concept as described in the previous sections.

As you can see, electrical engineers have figured out a use for circular units, perhaps because they are dealing with electrical wires, which are predominantly round in their cross section. Since electrical conductivity of wires is directly proportional to their cross-section area, it is just more convenient to use circular units (without π) for calculating the cross section and ultimately electrical conductivity. The same is true for the throughput capacity while transporting any substance via pipes (water, gas, oil, etc.) or moving blood through the blood vessels.

There are many other applications dealing with the circular shapes and spherical objects. In all these cases, it makes more sense to measure areas in circular units rather than squares and measure object volumes in spheric units rather than cubes. Take for example physics (gravitational, electrical and magnetic fields), astronomy (planets, stars, comets, and orbits), geology (areas around earthquake epicenters), telephony (areas of cellular tower coverage), etc.

If we are measuring circle areas and sphere volumes in "circles" and "spheres" (circular and spherical units), then we can call d2 "d circled" and we can call d3 "d sphered", because now d2 represents the area of a circle with diameter d, and d3 represents the volume of a sphere with diameter d. (Here, I just applied the same logic as how the conventional terms "d squared" and "d cubed" were coined - see Misnomer alert! section above.)

I would like to hear from you. What do you think about all this? Please share your thoughts in the Comments section below.